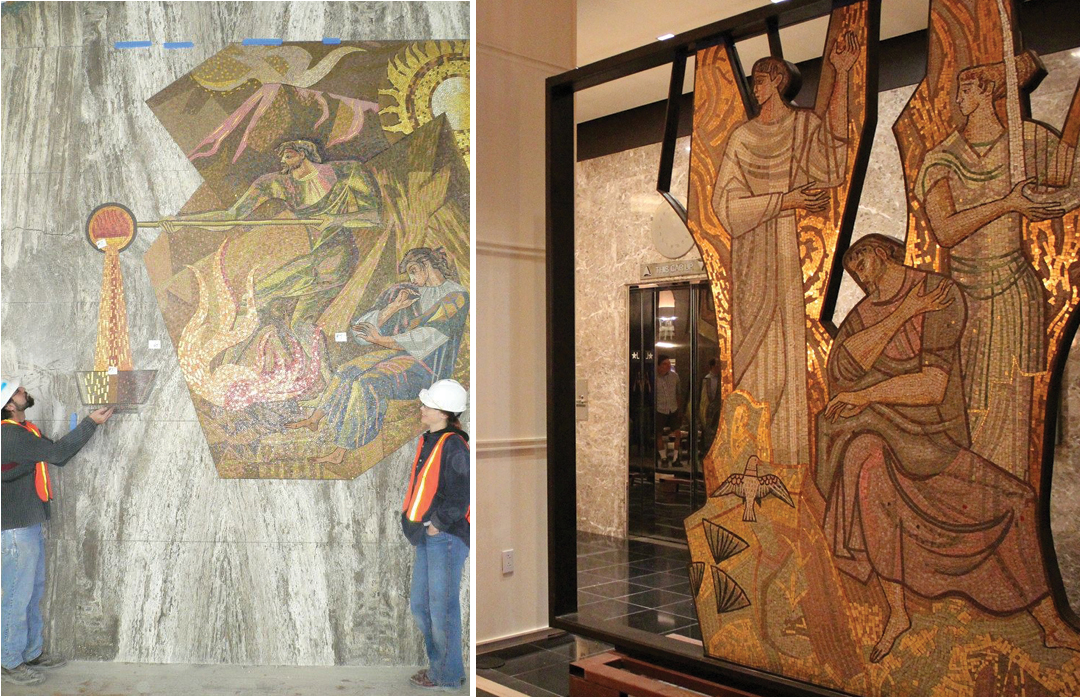 Storytelling: To the Rescue!

R.L. Thornton was known as “Mr. Dallas” for a reason. The founder of the Mercantile National Bank and president of the Dallas Chamber of Commerce, Robert Lee Thornton worked to invigorate the Dallas economy and is credited with bringing the Texas Centennial Exposition to Fair Park in 1936 – a project that set a national precedent for blending art and architecture.

As Dallas mayor from 1953 to 1961, Thornton lived the motto of “keep the dirt flying” and led a broad effort to bring business, beautification, and civic development to the city. During his tenure, the Statler Hilton Hotel, Dallas Public Library, City Auditorium, and an addition to the Dallas Municipal Building were all built. But the most notable project was his own building, the Mercantile National Bank.

The Mercantile tower, opened in 1943, was the only significant steel frame building built in the United States during World War II, a testament to Thornton’s power and influence. As Mercantile chairman, he oversaw a 1958 building expansion that represented the greatest combination of art and architecture in the city’s history outside of Fair Park. Prominent artist and designer Millard Sheets was commissioned to design and oversee the completion of fine handcrafted custom art for the enlarged Mercantile complex, which served as a crowning example of the role of a business in civic beautification. It was Thornton’s gift to his beloved city. 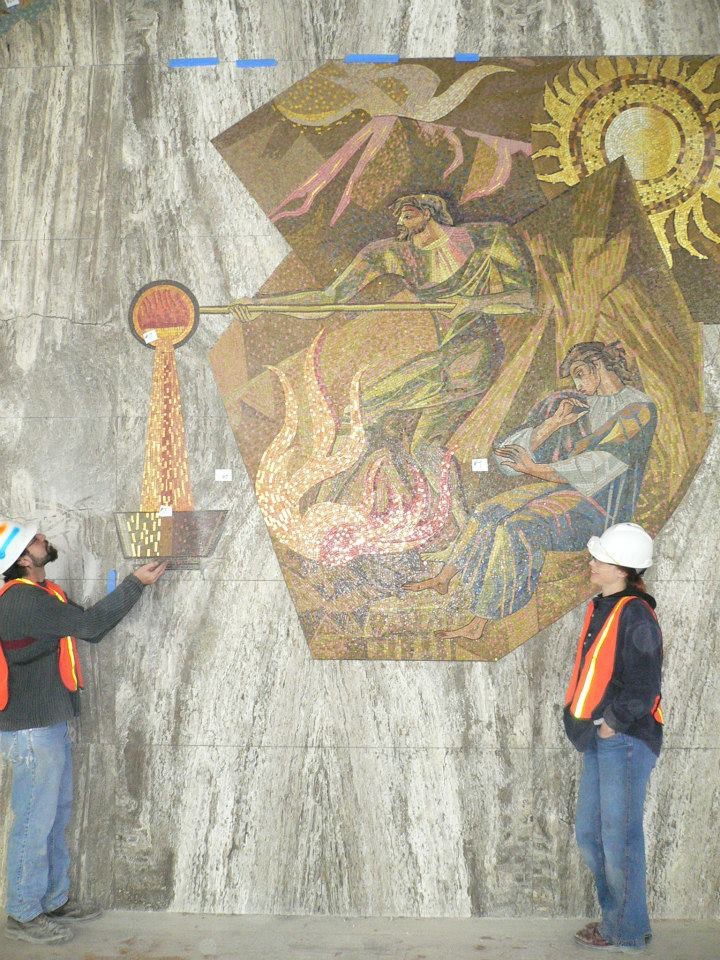 The intricate mosaics were built into the walls of the 1958 Mercantile building addition and had to be carefully cut out from the wall before the building was demolished in 2006.​

Under Thornton’s direction, Sheets gathered a team of more than 20 artists, including prominent local artist Octavio Medellin. The commissioned art included paintings, watercolors, murals, French tapestries, carpets, art glass, ceramics, sculpture, and Venetian mosaics in gold, platinum glass, and precious stones. At the time of the Mercantile dedication, The Dallas Morning News described the “staggering coordination of effects” of the completed work as “monumentally opulent, a dazzling dynamic sweep of embellishment from sub-basement level to thirty-first floor.” Rarely, if ever, The News said, had business and art been blended in such a way.

The savings and loan crisis of the 1980s led to the eventual demise of the Mercantile National Bank and the abandonment of the Mercantile block. Much of the art collection was auctioned off, but the pieces that were physically attached — inlaid mosaics, elevator panels and fixtures, art-glass light panels, and a relief sculpture in travertine — remained. Local preservationists were encouraged by the 2006 announcement of redevelopment plans for the Mercantile; however, it was soon clear that all but the original 1943 tower would be demolished, along with what remained of the art. Preservationists, art conservators, civic leaders, and concerned citizens all questioned why Dallas, as a community, was not working harder to save this important cultural history. 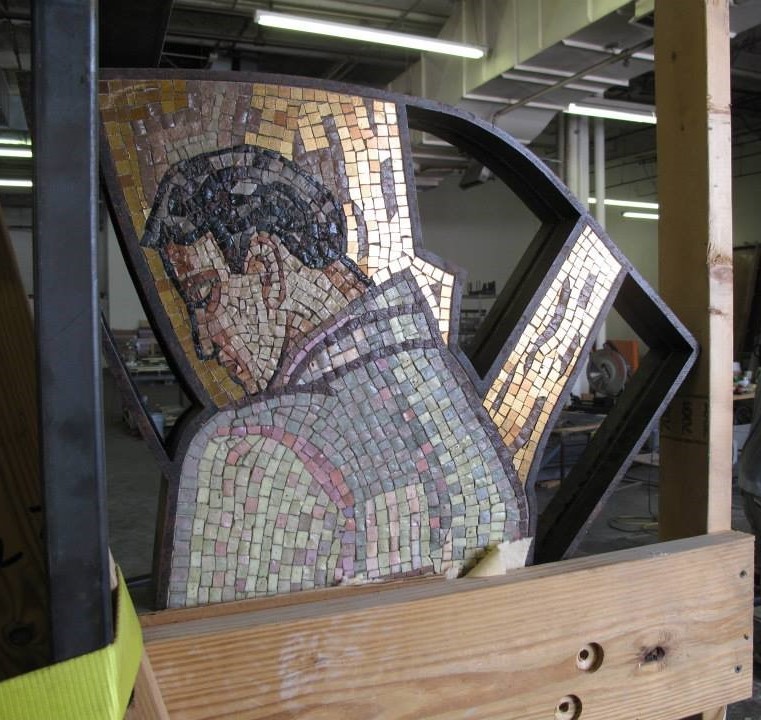 One of the mosaics rescued from the Mercantile building addition in its new frame and crated to be delivered to its new home in The Joule.​

With demolition underway, there was little time to save the art. Virginia McAlester, Hon. AIA, local leader in historic preservation, led the campaign to inform the public of the importance of the collection to the community. Architexas joined the effort, surveying, cataloging, and doing the research to document the significance of each piece of art. With the help of Van Enter Studios, a plan was made for the complex removal process to meet a very tight two-month deadline.

Tim Headington, owner of The Joule Hotel, stepped in as a benefactor for the project, saving the remaining artwork from the landfill. The bulk of the collection’s 93 pieces, consisting of mosaics inlaid into the Mercantile’s travertine walls, had to be mapped, stabilized, and supported on steel frameworks while the surrounding walls were carefully taken down to free the compositions for removal and storage. Holes had to be cut in the building to remove the large pieces of art by cranes. Teams worked tirelessly in revolving shifts to make the deadline and even rappelled down elevator shafts to save mosaics in the elevator cabs. 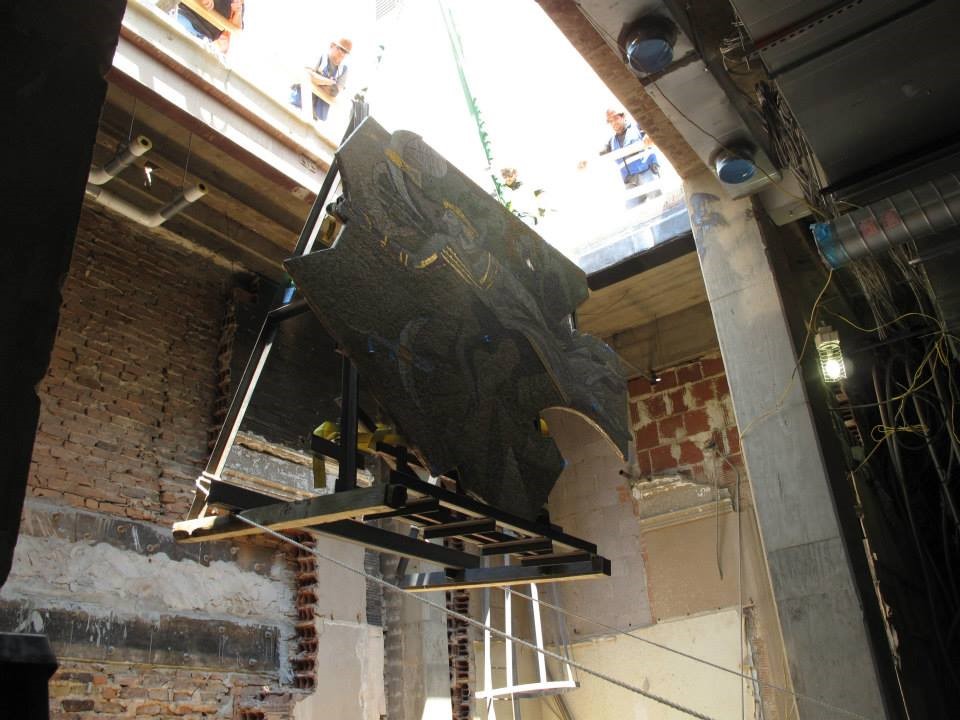 Many of the larger mosaic pieces from the Mercantile had to be craned into The Joule during construction due to their sheer size.

Each piece of salvaged art went through meticulous conservation and restoration by hand so it would be ready for installation when an appropriate home was found. That home turned out to be the expansion of The Joule Hotel in 2009. Headington envisioned the restored Mercantile art as a centerpiece of The Joule project, and, with careful planning, Architexas and Van Enter Studio developed plans for integrating the art into the design. The newly conserved art was delicately transported to the new site and complex mounting systems installed to support the mosaics, some of which weigh thousands of pounds. The size of some elements required that they be moved by crane into the building early in the project and the hotel expansion constructed around them. 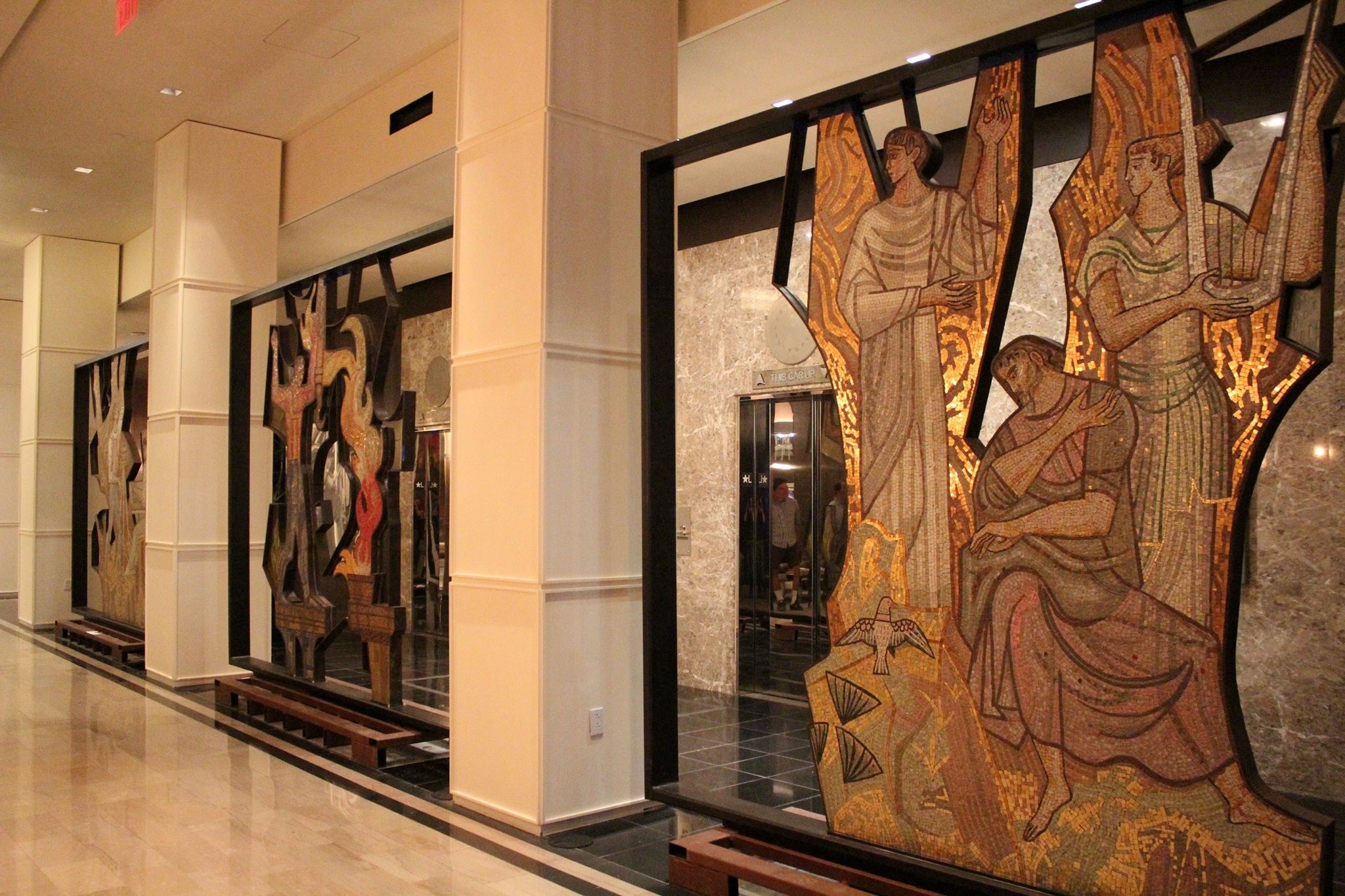 The rescued mosaics stand in their new home in The Joule. The mosaics were painstakingly restored, and custom frames were built to hold the mosaics.​

Today, the Mercantile Art Collection is again on public display throughout The Joule, re-establishing R.L. Thornton’s vision of civic beautification in his beloved city and preserving a unique collection of art that was almost lost forever.