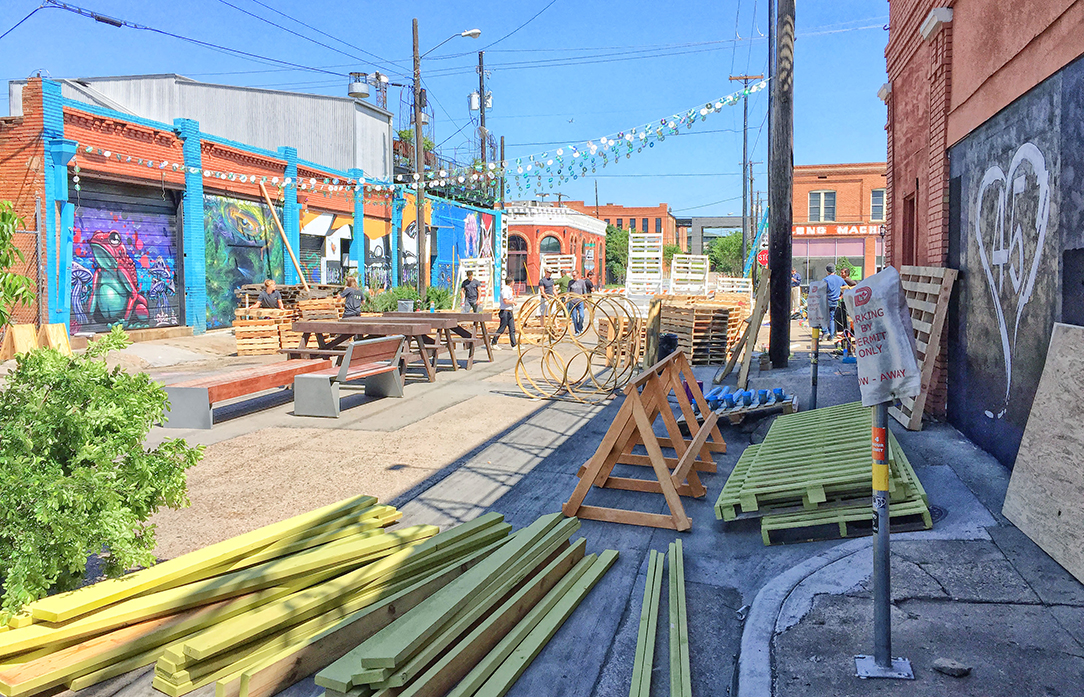 Rise of the Crowd

Thank you for this very informative article!

Rise of the Crowd: Crowdfunding and Crowdsourcing Help Architects and Planners Impact Communities

This past April, a park popped up in Deep Ellum. There were programmed activities, outdoor movies, music, and art—a welcoming environment designed specifically for a neighborhood that has long debated the best way to bring a park to the area. While the park was only a four-day experiment, brought to life to coordinate with the events of the 23rd Annual Congress for New Urbanism (CNU), it helped demonstrate the importance of active, engaging, and inclusive public space to a wide variety of people. Additionally, it brought the local design community, neighborhood, and City of Dallas together in support of the effort. 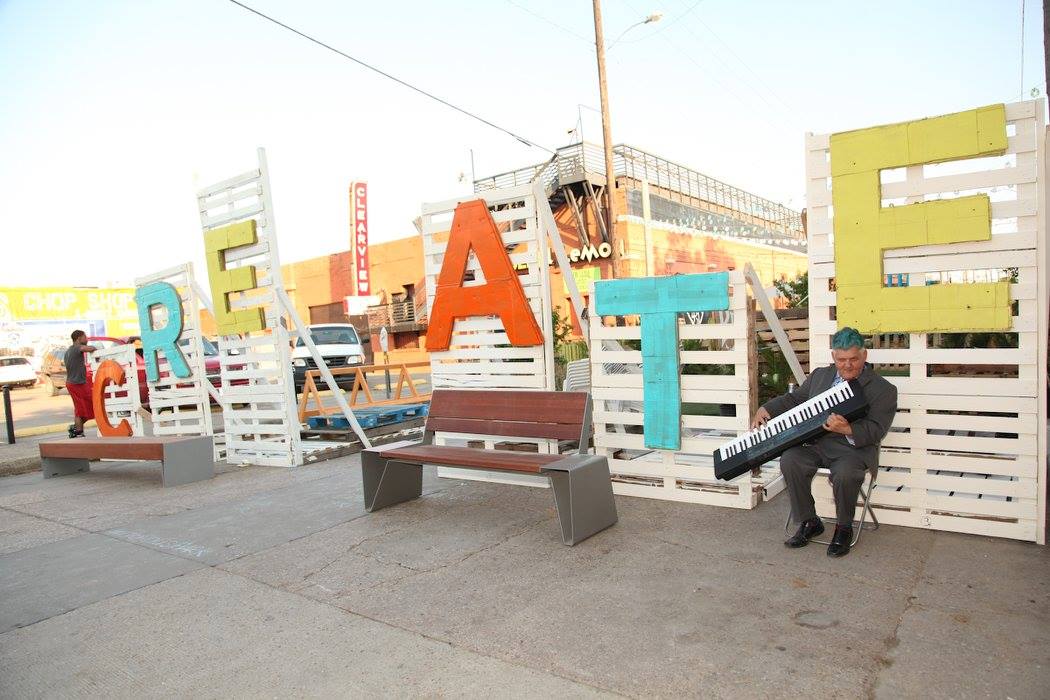 Perhaps the most impressive thing about the pop-up park was how it came to be. A group of urbanists, led by ASH + LIME Strategies, solicited design support from interested landscape and architecture firms, raised funds  through a variety of venues, and coordinated the approvals and permits required by the city. Callison and TBG Partners were quick to get involved, and neighborhood associations enthusiastically threw their support behind the project. As is becoming increasingly common these days, the project was driven by community involvement on all sides, through crowdfunding and the crowdsourcing of ideas and labor.

Crowd-driven projects like the Deep Ellum park are not new, but they are becoming more and more popular in the worlds of design and urbanism. Forming a project around community support rather than conventional channels allows project leaders to circumnavigate bureaucracy and take hands-on control in an efficient and productive way. 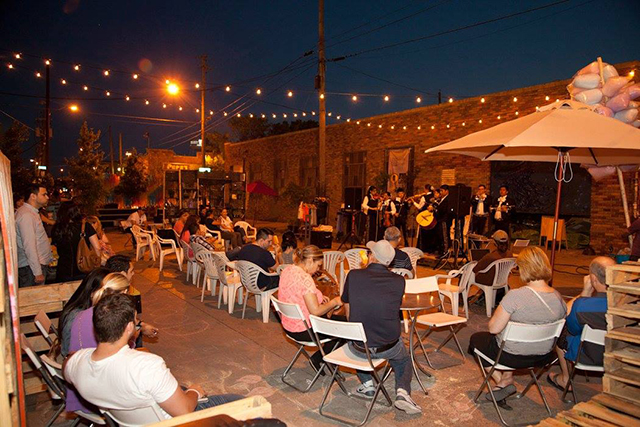 “Because of the crowd-focused approach, the Crowdus Street pop-up park team was able to spread many of the tasks between many people,” says Rik Adamski of ASH + LIME Strategies. “[We] were able to get large numbers of volunteers when we really needed them.” Simultaneously, fundraising was successful because it used a diverse approach, pairing crowdfunding efforts with more traditional fundraising efforts and sponsorship levels for donors. Because the project was linked to CNU, crowdfunded donations came from all over the country, a fact that surprised the organizers given the hyper-local nature of the project. 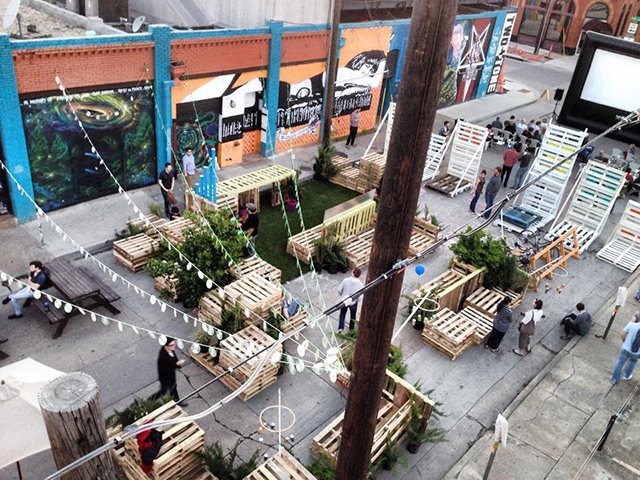 A bird’s eye view of the completed park shows what attracted the community to come. Photo credit: TBG Partners

Crowdfunded and crowdsourced projects are not all equally successful. While smaller scale community-rooted projects such as this pop-up park do well in gathering support and participation, many professionals are wary of what architectural critic Alexandra Lange calls “Kickstarter Urbanism.” The critic’s concerns recognize that many crowd-driven architectural and urban projects can be overly ambitious and that people often misunderstand the scale, scope, duration, and complexity of such projects.

One such project, The Lowline, was recently “kickstarted” with great success as a concept for a “reverse High Line” or underground park in Manhattan. However, the nearly $225,000 raised will not go directly to supporting the park, but rather to developing solar technology that would make the project feasible and that could be used in the future park, pending additional fundraising.

Furthermore, critics are apt to criticize crowdsourcing and crowdfunding as design-by-social-media, an extension of the design-by-committee phenomenon, which ends up favoring the opinion of the public over design intuitions and experts. Sites such as ArcBazar—which Dwell magazine referred to in a tweet as “the worst thing to happen to architecture since the Internet started”—create a frenzied design environment with a pervasive lack of quality control and financial exploitation of design labor.

The Humanity of Crowdsourcing

Despite these criticisms, it is undeniable that, when channeled effectively, crowd-driven design can create a lot of good, especially when looking at social causes that would otherwise not get sufficient attention. “It's important to emphasize that this type of tactical project is a team effort,” Adamski says. “One small group of people cannot do anything on this scale—at best, we can inspire and empower others.” 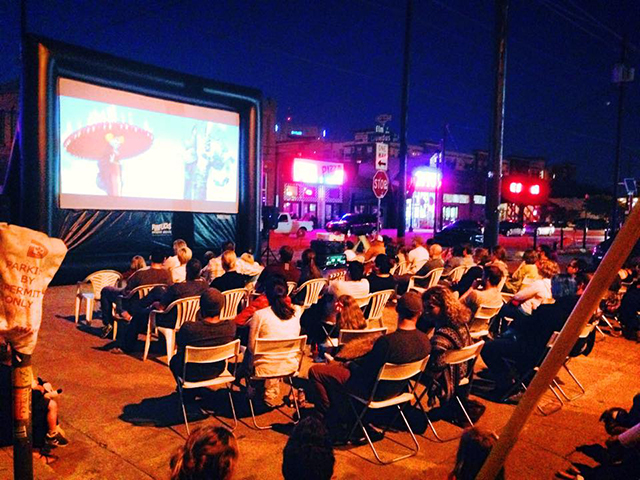 This socially-driven approach was the backbone of organizations such as Architecture for Humanity (AFH), which took a grassroots approach to design and construction internationally. AFH used crowdsourced design ideas and construction labor from the architectural, engineering, and construction community to tackle major housing crises, from war-torn Kosovo to post-earthquake Haiti. The international organization recently folded, but local chapters are working to find ways to continue the design mission, albeit at a more regional scale.

The Dallas chapter of AFH was established in 2009, and a committed core group of architects, designers, and planners has pushed forward with a variety of projects of varying scale, from organizing community brainstorming and design charettes to design competitions and small scale construction projects. The diversity of their work ranges from small-scale installations in Dallas to an orphanage in Haiti. In the past, fundraising initiatives have been creative (from movie screenings to pub crawls), but the chapter recently began partnering with organizations that have the resources to get projects done. This approach lessens pressure on the team and allows team members to focus more on the design work at hand.

Moving forward, “the work we are hoping to engage in is very neighborhood-based,” says Ryan Behring, one of the original founders of AFH’s DFW chapter. “At the neighborhood level, we see our group acting as a liaison between neighborhood leaders, community groups, the development community, and the City of Dallas.” In this vein, recent involvement has focused on the South Dallas neighborhood of Cigarette Hill, which needed help with both general neighborhood clean-up and design help to establish placemaking strategies. So far, the effort has resulted in designs for neighborhood welcome signage, sign toppers, and landscaping at Lancaster Boulevard. Work has been accomplished in partnership with the neighborhood, 2nd Saturday (a local volunteer organization), and the City of Dallas. As with the Crowdus pop-up park, a shared vision for the neighborhood has helped advance the work, build enthusiasm, and attract participation.

There is an ongoing struggle for many organizations in finding the right “crowd” to source from, whether it is designers or a general community. With any group consisting solely of volunteers, projects can stall depending on team members’ availability; and a similar paradigm exists for the funding of projects. Fine-tuning this process—and finding the right projects, neighborhoods, and volunteers to encourage involvement and support—is often a learning experience which translates into project execution. For AFH, “we learned from our own group, that growing involvement beyond the core group can be a hurdle to development, and I think that makes us a good fit for neighborhood work,” Behring says.

As groups work to find the most efficient way to approach crowd-driven design, the topic has become a prominent point of discussion within the architectural profession. Many universities have organized students to further the practice of crowd-driven design, forming community design studios in their respective cities with university funds. Similarly, the AIA has embraced the challenge on both national and local levels; the topic of crowd-driven design has inspired lectures and panels at architectural conventions and been the guiding force behind the formation of design-action groups such as the Design Voice committee in Austin.

In Dallas, the local AIA chapter has integrated principles of crowdsourcing and funding into the Emerging Leaders Program (ELP). This empowering leadership program for young architects includes a group community project as a component of the year-long course. The expectation is to organize and manage the design, funding, and execution of a community project. In doing so, ELP relies heavily on the power of the crowd: a diverse, otherwise unaffiliated, group of designers brought together to identify a community need, formulate a project around it, and see it through to completion. Seed money for each project is often crowdfunded from the group’s professional network and the projects would truly not be possible without the backing and encouragement of the overall architectural community.

Since the program’s founding, projects have included a playground at CityWalk@Akard, finish-out of a youth shelter for Promise House, and various master planning efforts. Bonton Farms in South Dallas the most recent, and arguably most successful, project to date has evolved into a two-year commitment from ELP. The project started out as the preliminary planning for an urban farm and help in obtaining city permits. It has grown to include a community center with meeting spaces and transitional housing options for community members. 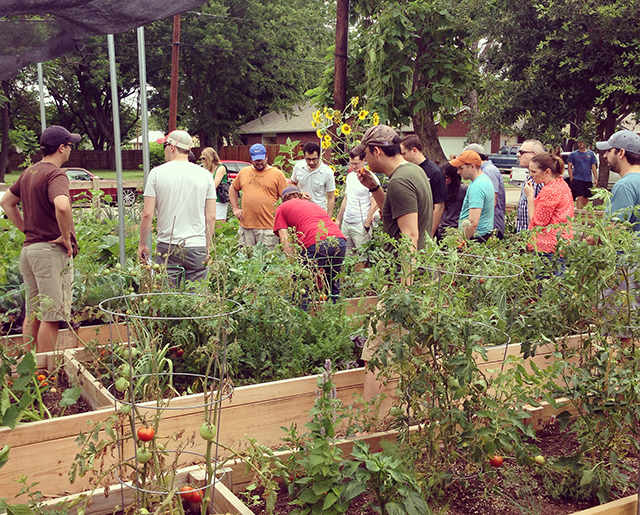 As with other crowdsourced projects, working out the availability of team members, finding a project of manageable scope and budget, and staying the course is a challenge. With the continuity of ELP, lessons learned have been passed down from class to class and this has made the projects more efficient over time. Earlier classes devoted substantially more energy to fundraising, but the focus with recent classes has been on partnering with organizations that can provide their own financial resources. Bonton Farms is an example of this; it was made possible through the involvement of His Bridge Builders and Habitat for Humanity. Volunteers from these organizations, as well as the neighborhood community and 2nd Saturday, worked to get the first phase of the project built and operational. 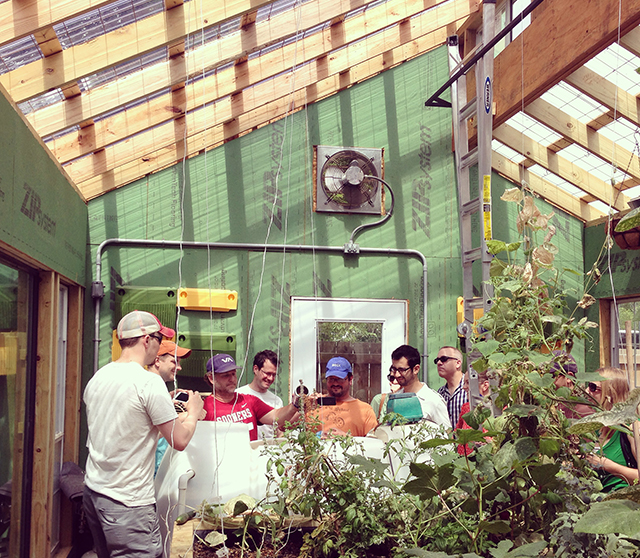 Pulling the project together with a diverse group of participants “may just be the biggest leadership lesson we have learned and it shows each of us how critical it is to put the right team together to get the task accomplished,” says ELP alum Andy Moon, AIA. As one of the core team leaders, Andy and his family became so invested in the project and neighborhood that they purchased land in Bonton and are now in the process of constructing a carbon-neutral home for themselves. 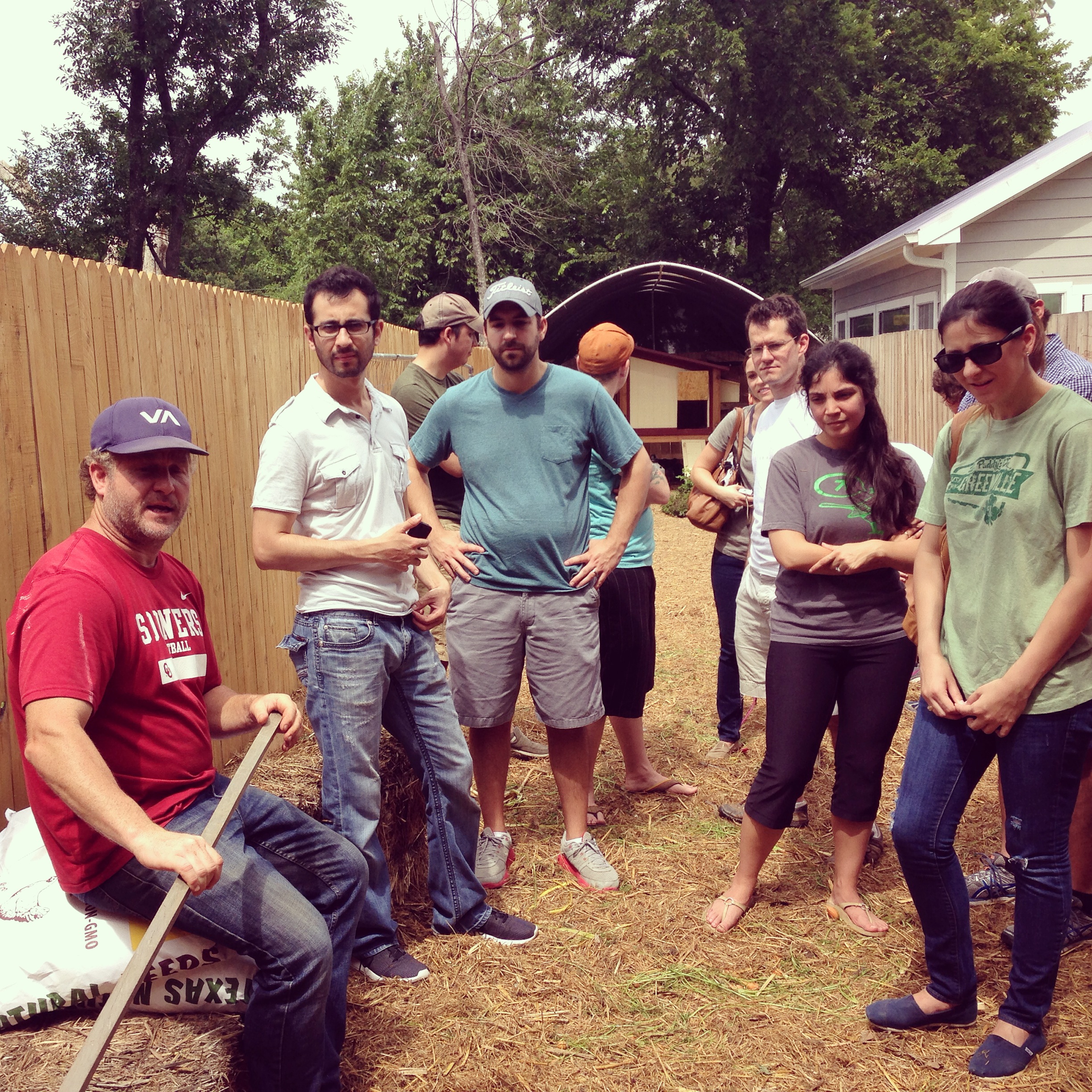 Architectural projects can often be too complex and involved to crowdsource effectively, but these local groups have all found that starting small and building out incrementally—through a network of community relationships, non-profit partnerships, and communication with the city—is the best way to tackle an ambitious project. These principles, along with a general desire to improve the urban fabric of our city, form the cornerstones of crowd-driven design in Dallas. As Amanda Popken of ASH+LIME Strategies puts it, “A common thread in the successful crowd-funded projects I've been involved in had to do with being a project for the public good. It's typically for a situation where there isn't necessarily an organization or government body tasked with providing it, but there's a need identified by one person or a small group who can rally the community. That's the other common thread—the ability to mobilize though an effective campaign.” 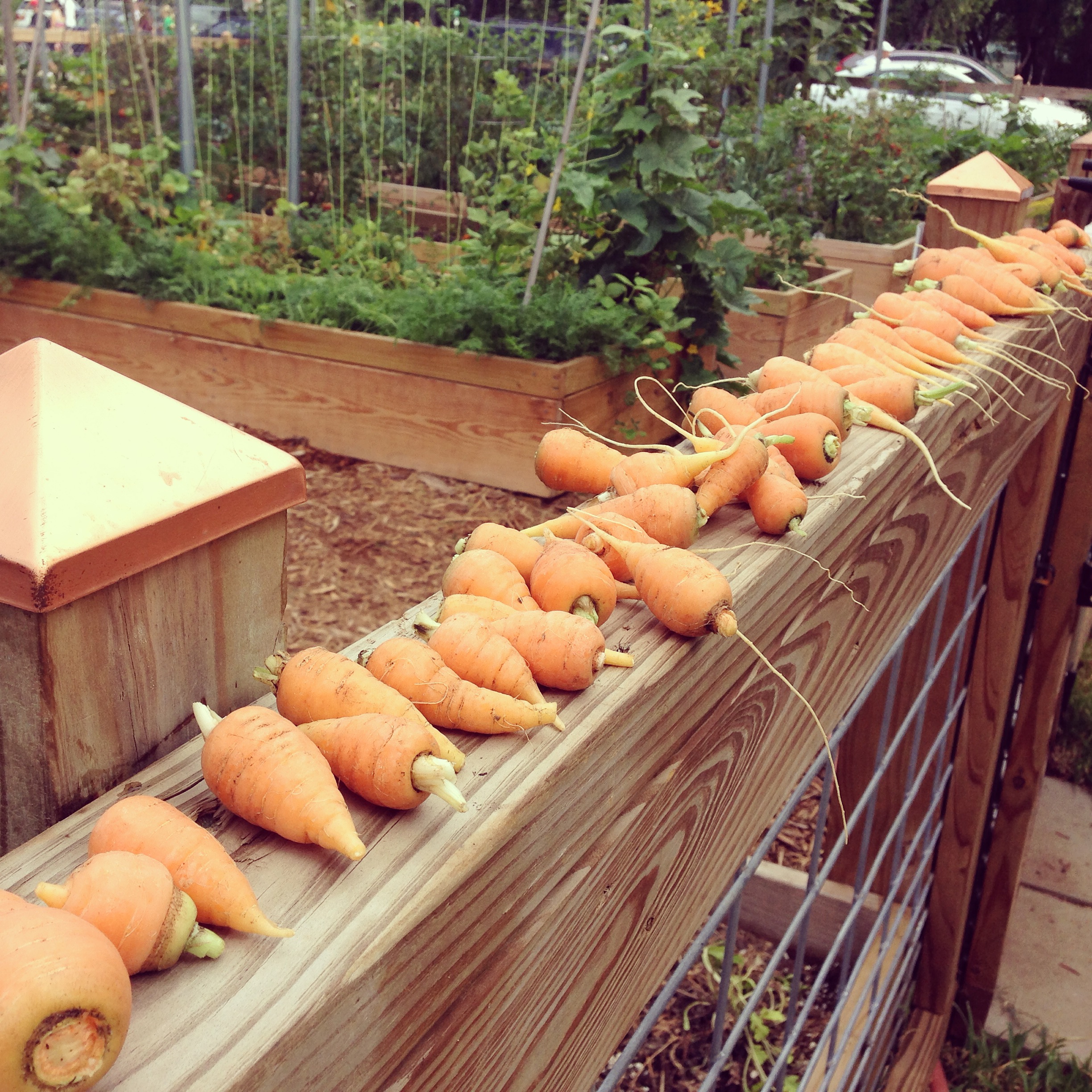 When done right, a successful crowd-driven project brings together a diverse group of people for a common cause that can have a powerful transformational effect on a community.

Mia Ovcina, AIA is an architect with DSGN Associates Inc.