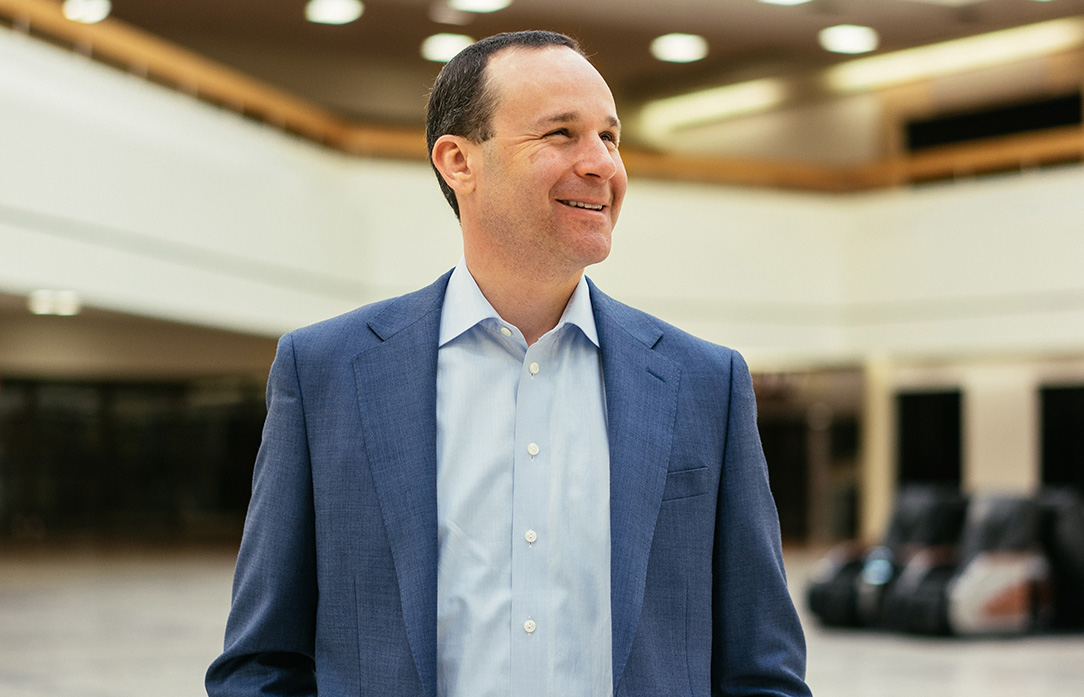 Former private-equity investor turned developer Peter Brodsky was raised in Brooklyn, the son of an attorney and step-grandson of the noted economist Peter Bernstein. Bernstein dedicated his best-selling book on financial risk, Against the Gods, to young Peter.

On the surface, Peter appeared to have a charmed life. However, he endured major testing while growing up. His mother was diagnosed with multiple sclerosis when he was 11 and his sister died unexpectedly of an allergic reaction when he was 15. His parents divorced, and Peter, while still a teenager, had to make medical decisions on his mother’s care. That included placing her in a nursing home, where she died when he was 22.

Despite these challenges, Peter enrolled in Yale and excelled in his studies. Since he majored in Russian, he took a job teaching English for a year in the former Soviet Union. He considered staying in the Soviet Union to pursue a business career but returned to the United States to first get some hands-on training with CS First Boston (now Credit Suisse).

Back in New York, someone suggested that Peter interview with Tom Hicks at the Dallas-based investment firm Hicks Muse Tate & Furst. Although a self-described “Ivy League liberal Democrat,” Peter moved to Dallas in 1995 to work for Hicks. He met his wife, Lael, the next year. Lael was a quintessential Dallasite who worked at Neiman Marcus, but Peter felt her subscription to The New Yorker was a sign that they were meant to be together. Within months, he proposed, and they began their life together in an affluent enclave of North Dallas. Peter and Lael had the late Frank Welch, FAIA, design a modernist residence that became their family home, replete with an urban chicken coop.

Peter has expanded beyond investing and North Dallas. He is now focused on educating underserved Dallas youth and redeveloping RedBird Mall. The elimination of the space between the words is part of an effort to "hearken back to, but also differentiate from, the past."

I recently sat down with Peter to learn more about why and how his focus shifted and his plans for economic redevelopment in Dallas’ southern sector.

What series of events led you to leave investment banking and focus on the southern sector of Dallas?

I enjoyed my time in investments but wanted to find a way to feed my soul and give back to the community. I applied to and was accepted in the Dallas Regional Chamber’s Leadership Dallas program. Over the course of 10 months, I received a very meaningful overview about Dallas—its strengths as well as its challenges. The Dallas that I had seen was mostly Highland Park, or Highland Park-like. I realized Dallas was a diverse, textured city that was much more interesting than I thought. One of the areas that I became focused on was the inequities in our educational system throughout the city.

Is this what led you to get involved in the Knowledge Is Power Program (KIPP)?

Yes. I learned how KIPP used innovation to help students in under-resourced neighborhoods in Houston, Dallas and a couple of dozen other cities succeed. They help children develop the knowledge, skills, character, and habits they need to succeed in college and build a better tomorrow for their communities.  I became actively involved in KIPP and was the board chair for DFW for 6½ years. During my tenure, we grew the KIPP program to cover 2,400 students in southern Dallas. KIPP now has both elementary and middle schools in the southern sector of Dallas and will start a high school this year.

You are focused on redeveloping RedBird Mall. Tell us some about the history of Red Bird.

The DeBartolo family, who owned the San Francisco 49ers, were mall developers and built a mall in the Red Bird section of southern Dallas in the mid-1970s. They gave the mall the Red Bird name. It was, and remains, the only major shopping center located in the southern half of Dallas. Initially, it was anchored by four department stores: Sears, J.C. Penney, Sanger-Harris (later Foley’s, then Macy’s), and Titche’s (subsequently Joske’s, then purchased by and renamed Dillard’s). Montgomery Ward was added a few years later. Of those five anchors, only Sears and Burlington Coat Factory (which replaced Montgomery Ward) are still operating at the mall. RedBird has a great location, at the intersection of U.S. Highway 67 and Interstate 20. In the mid-1990s, a perception of crime in the area became an issue, and that negatively impacted the volume of shoppers at the mall. The mall was sold several times and was rebranded as Southwest Center Mall, but that name was never accepted by those who shopped and lived around the mall. The new owners basically tried to milk what was there without any long-term vision of financial investments. The mall had also been developed with multiple owners of various tracts of land in and around the mall. When I became interested in redeveloping the mall, there were 28 property owners in the area, further complicating the effort.

Why did you decide to redevelop RedBird?

I saw an opportunity to do good for the community while also creating economic value.  Many people have an oversimplified and overly negative view of southern Dallas. First, it is an area of 208 square miles with a wide range of neighborhoods. The area around RedBird has solid demographics, with a median family income of $55,000 per year. It has a great location and is the only major shopping center in the southern area of Dallas. For perspective, it is 10.7 miles from downtown Dallas, and the Galleria is 11.3 miles from downtown—both of them readily accessible. There are five colleges and universities in the area, and over 50,000 people are members of the megachurches located nearby. There's a terrific workforce that lives nearby, but they have to drive too far to Frisco or west on I-20 to Grand Prairie and Arlington to work, and a part of our vision it to create space and bring in companies with job opportunities for these residents. My purpose, along with our other investors, is to redevelop RedBird (we have brought the name back) to be a community asset and economic generator for live-work-play-stay in southern Dallas and the surrounding cities.

What is the status of the RedBird redevelopment? What has been done and what are the project’s goals?

Our investment group purchased the common areas of the mall in 2015. Since then we have consolidated ownership and now have 78 contiguous acres under our control. We hired Omniplan to help us develop a master plan for the project. They are the same architecture design firm that worked on Highland Park Village’s renovation and NorthPark Center’s expansion. We have commitments for a new Marriott Courtyard since the lack of hotel space was identified as a key need for the area. And we have broken ground on a new free-standing Starbucks, the first one in southern Dallas. It’s also part of Starbucks’ initiative to invest in underserved communities around the country and will include a training center for Starbucks employees.

We have also partnered with Dallas-based commercial real estate developers Frank Mihalopoulos and Terrence Maiden to become key players in the redevelopment efforts.  Terrence is involved with the project daily and brings a longtime personal experience with the mall, having grown up in Oak Cliff. Mihalopoulos is redeveloping other aging malls in other states and brings valued expertise to the project.

Going forward, we have plans for a park, restaurants, residential and office space. We also are opening the RedBird Entrepreneur Center in collaboration with the Dallas Entrepreneur Center, supported by the Dallas Regional Chamber. There's a lot of talent in this community, and a big need that kept coming up in our research was for high-quality incubator space. The City of Dallas and Texas Department of Transportation have also approved new access roads into the property. I’m very excited, and I hope this will be a role-model project for other malls across the United States. But most of all, I hope RedBird shows other developers that quality works in southern Dallas.