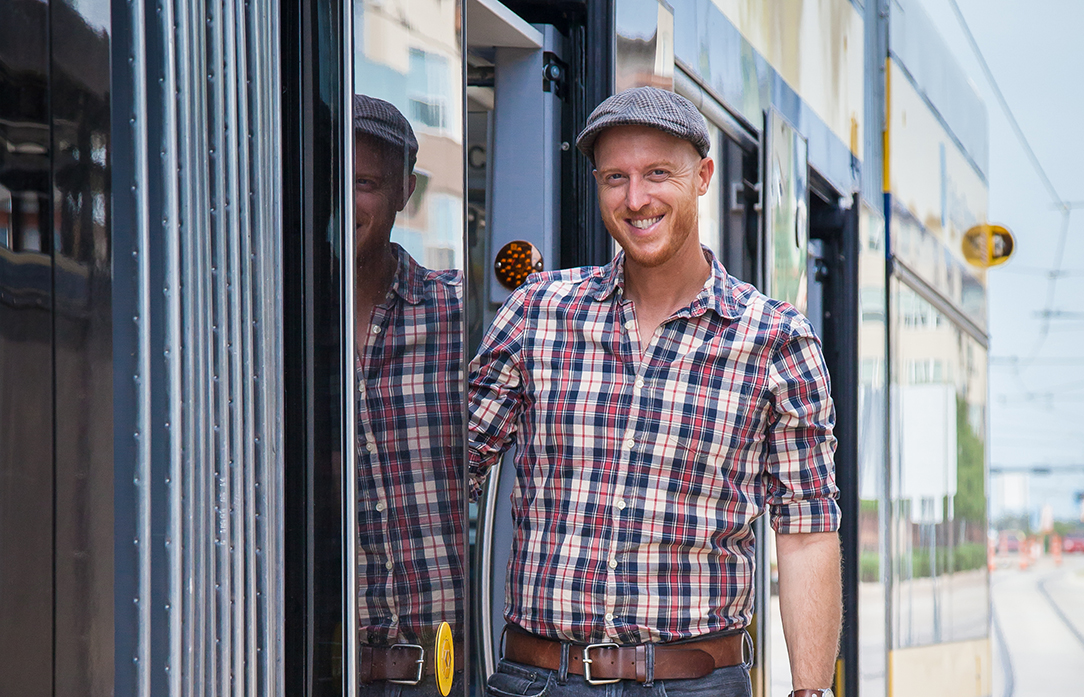 Jason Roberts is the founder of the Oak Cliff Transit Authority, an originator of the Better Block Project, and co-founder of the Art Conspiracy and Bike Friendly Oak Cliff. His focus on revitalizing inner-city neighborhoods was recognized with a Champions of Change award from the White House in 2012. Jason’s consulting firm, Team Better Block, has been widely recognized, including being showcased at the United States Pavilion at the Venice Biennale.

Tell us about your background.

I grew up in Garland and other towns around Dallas. From an early age I spent much of my free time outside, playing in creeks and exploring nature. I developed an appreciation for living in harmony with nature that serves today as a framework for my wanting to see our cities be livable with public spaces for everyone to enjoy. 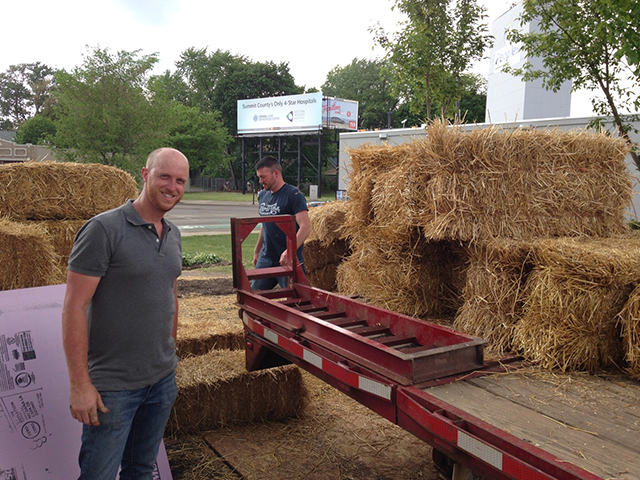 Jason Roberts lays out hay bales for a plaza garden.

Some of my early jobs were in the tech field during the dot-com boom. I developed websites and I had time in the evenings to read and study. I began to read books by Jane Jacobs and blogs on urbanism, and I became interested in neighborhood revitalization.

What brought you to Oak Cliff?

After leaving Denton, following time at the University of North Texas, I wanted to move to Dallas. East Dallas around White Rock Lake was too expensive for my budget, but I found affordable housing in Oak Cliff. I found some pockets of burgeoning front-porch communities in Oak Cliff similar to what Jane Jacobs described in her books.

How did you get involved as founder of the Oak Cliff Transit Authority?

Using my background in web development, I built a website for a concept called Oak Cliff Transit Authority in 2006. Having the site online for people to view almost created an illusion that what was still basically just a concept was actually a viable organization. We saw that there was interest in bringing this to reality, so we incorporated as a non-profit in 2007. We also began to hold lots of meetings to get community involvement about what the Transit Authority could and should be. The vision became to revive the Dallas streetcar system, and our group later spearheaded the city's efforts to obtain a $23 million TIGER stimulus grant from the Federal Transit Authority to help reintroduce a modern streetcar system to Dallas. We are very pleased that the initial 1.6-mile track from near Union Station to the intersection of Colorado and Beckley opened this past spring, and there are plans underway now to expand the line to Bishop Arts.

You also were an organizer of Bike Friendly Oak Cliff. Tell us how that happened.

I enjoy riding my bike, but Oak Cliff and Dallas in general have not been very bike-friendly, historically. Over beers, some friends and I organized the group to advocate for bike infrastructure. It has been a grassroots effort with blogs, group rides, and the formation of an advisory group for the city.

How much progress has been made in making Dallas and Oak Cliff more bike-friendly?

How did the Better Block Project develop from a concept into reality?

In 2010, a group of friends created an art project called Better Block in which we decided to create our dream neighborhood block in about a day using very little money. We never envisioned the project becoming a national movement and being part of a larger trend of citizen-led efforts to rapidly transform blighted communities around the world.

On a European vacation I had fallen in love with city blocks filled with old and young people, street music, flower shops, cafés, old buildings, and small marketplaces. When I returned to Dallas, I drove around Oak Cliff and saw boarded-up and vacant buildings, wide streets, small sidewalks, and little street life. I commented to a friend, “Why can’t we have blocks that look like the ones throughout Europe?” He scoffed, “Let’s be honest: Dallas will never be Paris.” That night, I began looking into what was holding my neighborhood back. I found a series of ordinances that prohibited or heavily taxed things that foster amazing urban blocks. From restrictive zoning rules, parking minimums, exorbitant fees on café seating, landscaping, and more, I learned that the ability to have a great block like those I had seen abroad was largely forbidden. 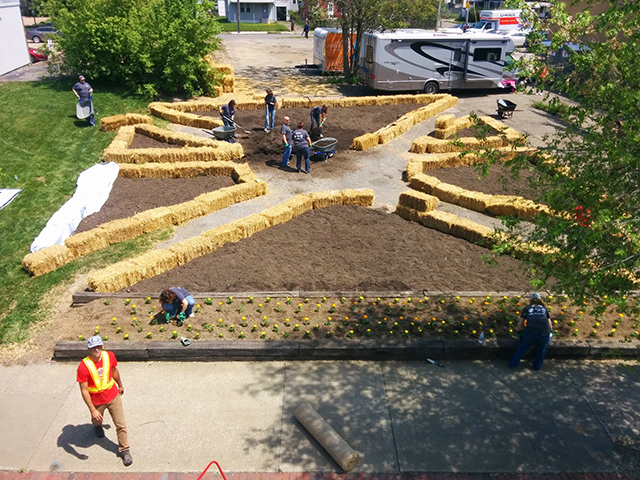 A vacant lot becomes a plaza garden, thanks to Keep Akron Beautiful volunteers.

We developed a plan that was the opposite of those found in traditional planning: Work cheaply and quickly, use temporary products, break rules, and focus on action over dialogue. The goal was simple: Build our dream block in 24 hours using anything at our disposal. Artists were key, borrowing was imperative, and the potential of going to jail was likely. A group of friends and I met at night in a theater prop warehouse and began laying out a vision for the block. … Paint and clean buildings; create bike lanes; set up outdoor cafés and fruit stands; string lights across the street; convert vacant buildings to art galleries, flower shops, kids’ art studios, and coffee houses. Lastly, we printed out the ordinances we were going to break and hung them in every window. On a Friday night in April 2010, we began transforming the block, and by Saturday morning the street was unveiled. 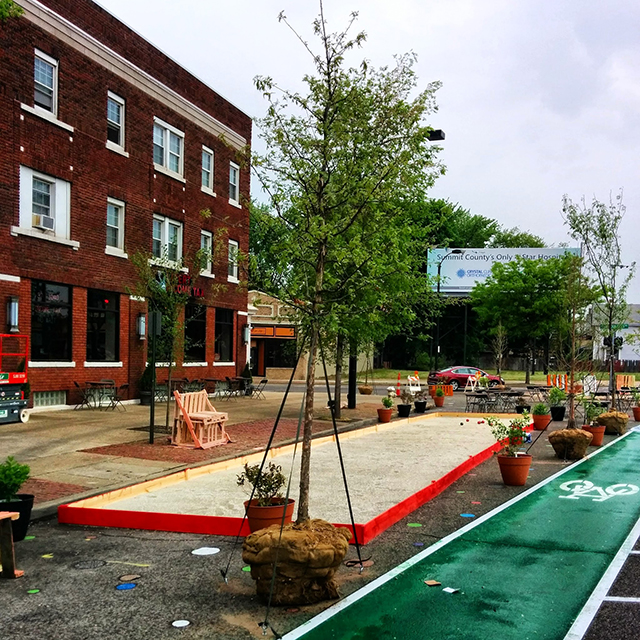 Developed in tandem with the Italian community of Akron, a pop-up bocce court is installed in a temporary plaza.

For years, we had been told that Dallas didn’t have the culture to embrace a walkable, urban environment—that it’s too hot, that people are too accustomed to driving, and that no one would come. What we saw that day challenged everything we’d been told. People walked to the street, sat outside, drank coffee, and read newspapers. Flowers hung from window sills, old men played chess, children made art in former auto shops, teens pedaled in freshly painted bike lanes, residents began volunteering in our pop-up shops, and musicians appeared unexpectedly with open guitar cases and performed on street corners. The street came roaring back to life. In 24 hours and with less than $1,000, we built our dream block and disproved the skeptics. Most notably, we learned that a vision is fruitless without action. 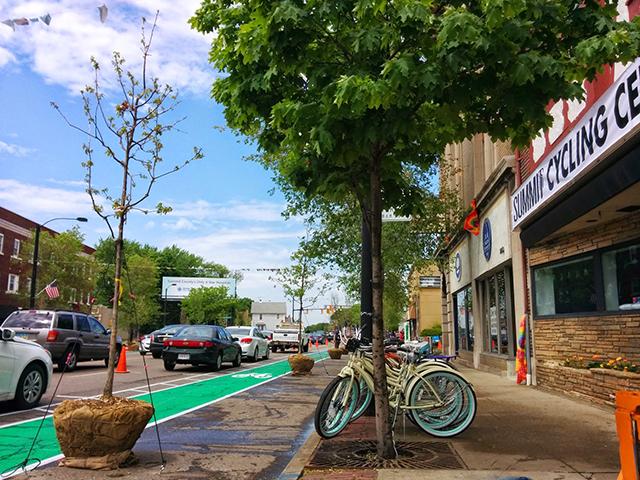 A building slated for demolition is converted into a bike shop.

What has happened since then with Better Block?

The initiative has spread more than we ever imagined. The project has now become an international movement, occurring everywhere from Melbourne, Australia, to Tehran, Iran, and has been featured in The New York Times, in Dwell magazine, in TED Talks, and on National Public Radio. Team Better Block was even showcased in the United States Pavilion at the Venice Biennale as a part of its Spontaneous Interventions theme. The American Society of Landscape Architects has also given a National Honor Award to Team Better Block. 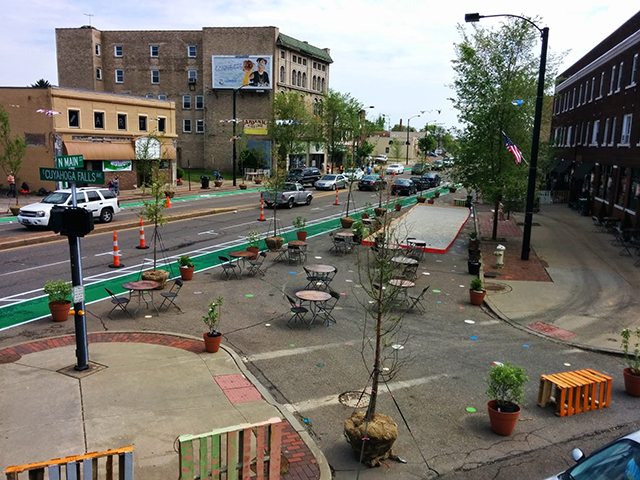 A turn lane is converted into a plaza, complete with al fresco seating and landscaping.

Oak Cliff Transit Authority and Better Block are both remarkable achievements, but you’ve achieved much more. Tell us about being a co-founder of the Art Conspiracy.

In December 2004, Sarah Jane Semrad and I developed the idea of creating an event where local artists could create art together, fostering a sense of community while raising money for a local non-profit. We held the first event at the Texas Theatre because of its ties to the Kennedy assassination conspiracy theories—hence the name “Art Conspiracy.” Each year since then, there is an open call for around 100 artists, who come together to create the art. The auction is a big party with live music, food, and drink. The live auction proceeds are given to a different local non-profit each year.

What is a typical day for you?

Busy. Calls, meetings, and planning for future events. I am a business partner in some Oak Cliff restaurants and also spend time with my kids. Over the course of a month, I usually am traveling close to 50% of the time.

How did your cancer diagnosis and treatment impact your life and goals?

I was very fortunate that my partner in Better Block, Andrew Howard, kept the organization going in a strong and viable manner. My treatment and some surgical complications kept me sidelined for close to a year, so I am very grateful to be active again.

In your limited spare time what do you like to do?

Play keyboard and guitar in a band a few times a year. I also like to ride my bike when possible.

See a university open a campus in Oak Cliff. Help construct new buildings with and for communities. Incorporate what has been learned into a true community.

“He went beyond just talking and took action.”