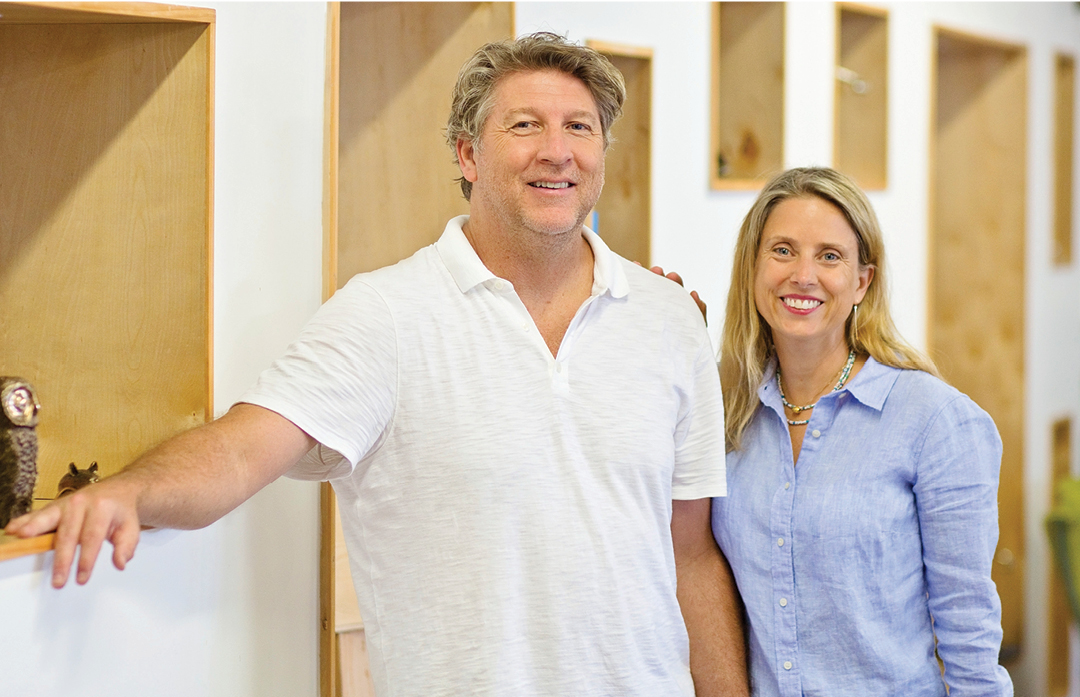 Brad Oldham and Christy Coltrin are partners, both at Brad Oldham Sculpture and as husband and wife. Their studio work exemplifies one of the definitions of craft: “an art, trade, or occupation requiring special skill.” Together they craft sculpture in a wide range of materials, sizes and styles. Brad was named the inaugural Artist of the Year by the Dallas Convention and Visitors Bureau, received an Artisan Award from the Texas Society of Architects and the Artist/Craftsman Award by the Dallas Chapter of the American Institute of Architects.

Tell us about where you grew up, your family, and childhood interests.

Christy: I am the oldest of three children and was born in Bryan, TX, where my parents were students at A&M. After they graduated, we moved to rural Pennsylvania and lived in a farming community. Growing up, I was very active in community service, gymnastics, cheerleading, and was on the yearbook staff.
Brad: I was born in Glendale, CA, and our family moved to Fort Worth when I was 15 months old for my dad to work at General Dynamics. After a few years with General Dynamics, my dad took a job with Bell Helicopter, which took us to Iran, where I lived from ages 7 to 11. Dad then worked for various companies as a consultant in aerospace, telecom and project management, which eventually brought us back to Keller, TX. I’m the third of four kids. I have an older brother and sister and a younger sister.

What was your educational experience after high school that led to artistry?

Christy: I’m a third-generation Aggie. My grandfather studied architectural engineering.  I studied marketing communications, which I found interesting since I had been on the school newspaper and yearbook staffs. I like writing very much. I enjoyed developing close friendships in school and enjoyed studying public speaking and creative writing.
Brad: I attended Austin College for two years, then 2½ years at Texas Wesleyan on a basketball scholarship, where I earned a degree in economics/finance.

Before collaborating, how did you put your Marketing Communications degree to use, Christy?

I worked in commercial real estate from 1988 to 1991 in Washington, D.C., marketing high-end commercial projects. I was involved in the historic renovation of Warner Theatre there. I moved to Dallas in 1991 and held a series of jobs, including becoming the development director of the SPCA, creating community around shared interests. I met Brad at an SPCA fashion show. Brad’s brother Todd had been the honorary chair, and he introduced me to Brad, but we didn’t keep in regular contact at that time.

In 1999, while doing marketing work for the Kirby Building restoration project I met up with Brad again. The project owner and developer wanted a unique invitation for the opening of the Kirby Building cast in metal. I reconnected with Brad to create the invitation which led to doing freelance writing for Brad's new sculpture company. Later, I was the marketing director for Park Place Dealerships. During that time, the company won the prestigious Malcolm Baldrige National Quality Award. In 2007, I left Park Place and began working with Brad to grow the company together.

Brad, describe your career in the family apparel business before Brad Oldham Sculpture.

My brother Todd started making clothes in the early ’80s and turned it into a company with the help of my mom, Linda Oldham. I started working for them in high school. After graduating college, I opened my own shop in North Richland Hills mostly making buttons and jewelry for the company. In 1992, I joined the company full time as an employee and helped with production. After the company was sold to Jones Apparel, Todd introduced me to the New York-based designer David Rockwell, where I did work for David at the Little Buddha Café within the Palms Casino, including— bronze castings, columns, and light fixtures. Over the years I have worked for Jeffery Beers International, Gensler, Corgan, Wilson & Associates, Hirsch Bedner Associates, Whitespace Interiors in Chicago, and many other firms across the U.S. and Europe. As Christy mentioned, I started Brad Oldham Sculpture in 1999 and the business grew so that Christy was able to work with me full time in 2007.

How do both of you collaborate at Brad Oldham Sculpture?

We work on telling stories and creating experiences through sculpture for our clients. Christy and I conceive our designs together with our respective skill sets, bringing a different, unique view to each project. We view our studio’s work like a team, with real involvement from everyone who works with us.

What is the significance of The Traveling Man sculpture project that is so prominent in Deep Ellum?

Brad: Barry Annino was a longtime advocate for Deep Ellum. When DART needed to replace the railway underpass by the entrance to Deep Ellum, Barry and neighborhood advocates secured a commitment from DART to develop a new artistic gateway to welcome residents and visitors. There was a call for entries across North America for artists to submit designs for the competition. Brandon Oldenburg, Reel FX Creative Studios, and our company won the competition.

The Traveling Man encompasses the music and history of Deep Ellum. As the story goes, a blues musician fell asleep by an elm tree in Deep Ellum, spilling his bottle of gin, soaking deep into the ground, touching the roots of the tree to a buried train underneath. The Traveling Man was born. The adjacent BIRD sculptures have a mirror finish so you can see yourself in them, further connecting to the past and the future. It took us two years to complete the project.

What is the origin of the Tiny Sparks pocket sculptures collection?

Christy: Unlike our site-specific, monumental work at Brad Oldham Sculpture, they are pocket-size, giftable sculptures. The messages with each sculpture and the small scale are intimate — people really engage with small artwork differently than public art. My mom died about five years ago, and this concept was developed in part in honor and memory of her as I wrote about the most important feelings that we find difficult to communicate. Tiny Sparks carry messages when words fall short. There are 11 sculpted forms that I made at home using cake-decorating tools, and then I brought them into our studio for production. 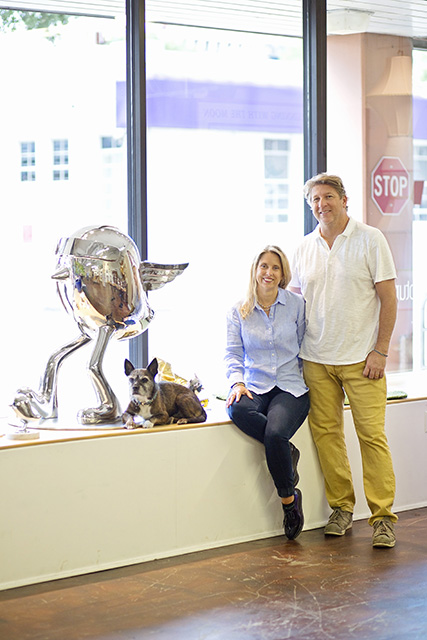 What are some of your community outreach initiatives?

Christy: We support young artists by hosting a show in our studio for young K thru 12 grade artists each January. The students like to see their artwork in downtown Dallas in a professional art environment. We support the Stewpot Alliance with a custom spoon each year during the Soup’s On fundraiser, and we created the Birth of a City sculpture for the Stewpot’s Encore Park amphitheater.

We enjoy creating tabletop sculptures for a couple nonprofits that have become an icon for the organization, such as the Milton P. Levy Award of LaunchAbility, which is now called My Possibilities, a non-profit that works with adults with cognitive differences.

Tell us about your family.

Both: Our son is 23, and is a graduate of NYU. He is an artist who is involved in fashion, theater and film in New York, just back from assisting with a fashion show in Paris. We have a daughter who is 20 at UT-Austin, studying pre-med, and we have a 16-year-old daughter just finishing her 10th-grade year at Highland Park High School. She will follow in her sister’s footsteps at Mercersburg Academy in Pennsylvania, close to the community where Christy grew up.

Last, when you are not busy working, what hobbies keep you busy?

Christy: I sculpt small beads for lost-wax bronze or sterling silver casting, and collect beads on our travels for jewelry that I make to further the Tiny Sparks stories. I enjoy blending various types of tea from exotic sources. I like to travel and enjoy reading.
Brad: I enjoy walking our dog, Pete, and like fishing. I also enjoy basketball, movies, and we travel a lot. I travel throughout the U.S., China, and Asia for work.

What books have you read recently that you find interesting?

Christy: I enjoy history books, like Hamilton by Ron Chernow, and page-turning beach reads. I really enjoy researching history that relates to projects we’re working on. We dive deep into our background work for our site-specific commission. We fall in love with each location in our reading, research, and interviews.
Brad: I enjoy mystery novels, especially those by Lee Childs. One of my favorite reads is Secret Spy.

Favorite types of music and podcasts?

Christy: I primarily listen to alternative music on satellite radio, and I also listen to soundtracks and the music our kids listen to such as Kanye West, Kendrick Lamar. I enjoy podcasts such as Revisionist History by Malcolm Gladwell as well podcasts by Marc Maron and Dak Shephard — and many serial, story-based podcasts.
Brad: Country and pop.

Christy: I enjoy Hong Kong’s areas that are off the beaten track as well as Palm Springs. I also enjoy the creeks and pocket parks in Highland Park.
Brad: I like the atmosphere of San Francisco and also enjoy China and Hong Kong. I enjoy traveling across Texas as well. Locally, I like the Trinity River Audubon Center and eating lunch at the food trucks at Klyde Warren Park.

What guests, living or deceased, would you invite for an evening of dinner and discussion?

Christy: Thomas Jefferson, David Bowie, Oprah, and Gal Gadot.
Brad: Robert Redford, John Adams, and Teddy Roosevelt, along with some of the American Indians of the past and some of our U.S. Navy SEALs.