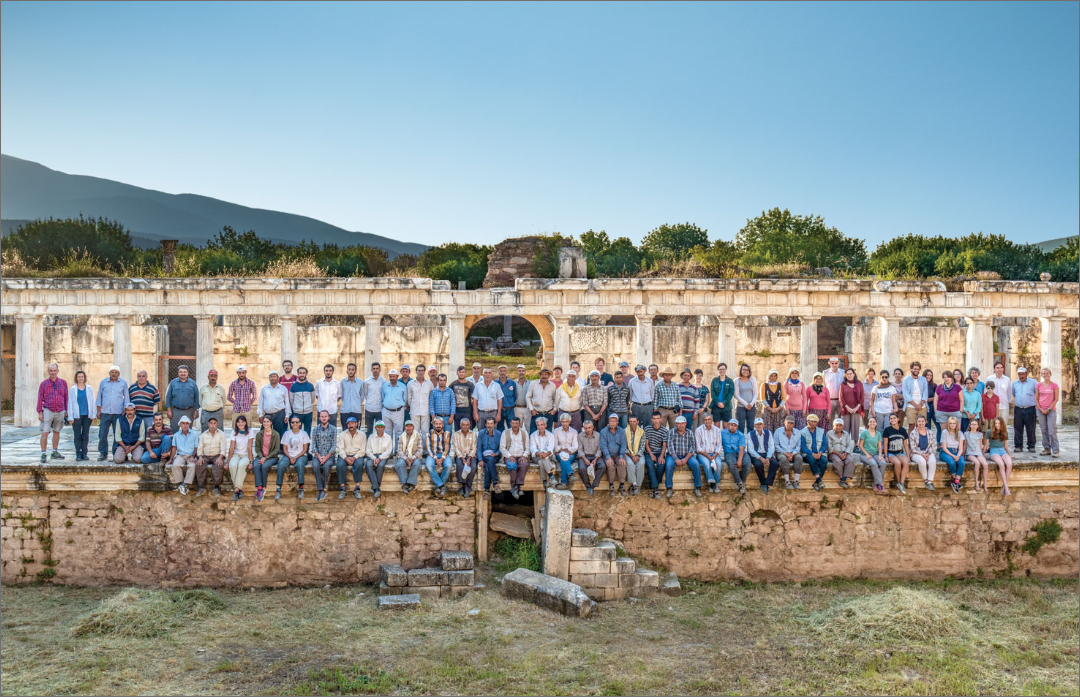 Passion Revealed: Harry Mark, FAIA Focuses on the Intersection of Architecture and Archaeology

The following article is about our own humble editor who voices his thoughts at the beginning of each publication but rarely shares his fascinating experiences with his work in Turkey. After much convincing from the Columns committee, we are excited to tell Harry Mark’s inspiring story.

“It belongs in a museum!” shouts the young Indiana Jones at thieves trying to steal the Cross of Coronado. The scene is at the very beginning of Indiana Jones and the Last Crusade and establishes an enthusiastic hero who will fight for the preservation of historically significant sites and artifacts. Armed with horses, guns, lassos, and wit, Indiana goes on to (spoiler alert from 1989) save the Holy Grail from the Nazis. Just an average day for a professor.

For 25 years, Harry Mark, FAIA has been traveling to Turkey armed with pen, paper, and a moral compass that has uncovered antiquities belonging in a museum. He is an architect living a dual life between architecture and archaeology, Dallas and Turkey. He utilizes his architectural training and drawing skills as tools transcending our traditional role of building new places and entering into an academic world of conservation, documentation, and reconstruction. In Turkey, drawing is about preserving and communicating to future generations about the antiquities and culture they discover. While it might be a joke in Indiana Jones, in this story the pen truly is mightier than the sword. 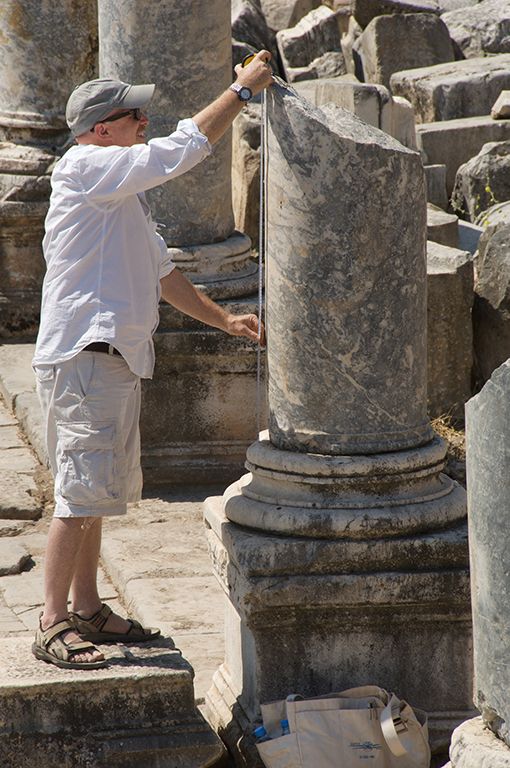 In southwest Turkey, the newly designated UNESCO World Heritage site of Aphrodisias has been undergoing modern-day excavations to preserve the Roman Empire-era capital city of the province Caria since 1961. What began as a passion for Kenan Erim, a young Turkish diplomat’s son and Princeton professor, has evolved through the leadership of the current director, R.R.R. Smith, into an international endeavor administered by New York University and Oxford University. Each year, the project engages the brightest students and professionals through a range of expertise including art history, archeology, and architecture.

Harry's involvement began as a University of Pennsylvania graduate student lured by a summer in Turkey and the chance to work on an archaeological dig. By chance, he discovered a lifelong project and a crusade of his own.

“I've spent almost half my life in Turkey,” he says. “That's the longest time in any one place for me.”

After the first year of practicing architecture at an international firm in Dallas, Harry realized he wanted an unconventional career path that would allow him the flexibility to work as both an architect and conservationist. His first job out of school promised during his interview to allow for this flexibility but when the time came to go to Turkey, they could not promise he would have his job when he returned. The choice to start his own practice allowed him the flexibility and peace of mind to continue his work in Aphrodisias each June, July, and August. 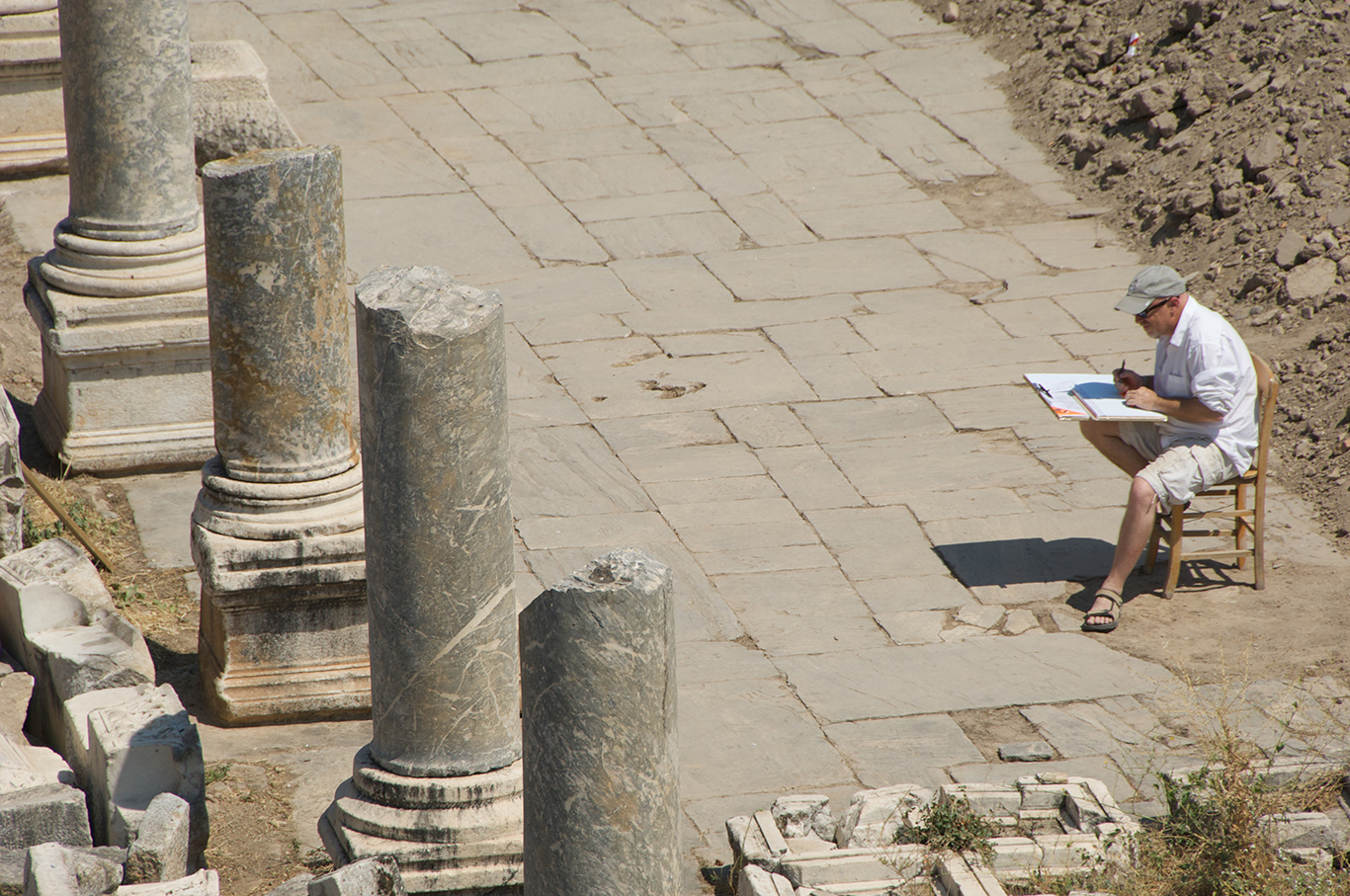 Every June, Harry starts his 30-hour journey to Istanbul and then to Izmir, followed by the long drive to Aphrodisias. The excavation team lives in a stone structure from the late 1800s that was part of the original village of Geyre. The farming village grew up around and within the ancient ruins, including the outdoor amphitheater. After the area was declared an archeological excavation site in 1961, the entire village of Geyre was relocated 2 kilometers to the west.

From about the 6th century BC, the city grew up around the Sanctuary of Aphrodite, goddess of love. Originally it was a Greek city state and later part of the Roman Empire. As a result, Aphrodisias is a unique place to learn about the intersection of Greek and Roman cultures. Academics refer to it as an artistic center because of its renowned school of sculpture and nearby marble quarry. Its urban design and architecture were built to a grand scale and heavily populated with locally produced marble sculptures.

Once a thriving urban center that boasted a reflecting pool two blocks long and a stadium that could seat three times its population, Aphrodisias eventually fell into decay in the late 600s A.D. Historians believe this was because of a weakened government in Constantinople and not any singular event.

All this history is set within the Meander River basin, about 150 miles from the Mediterranean Sea. With hills in the backdrop and ruins throughout its topography, “there is a romanticism about the site. It’s hard not to fall in love with it,” Harry says. “It’s intimate, rich with beautiful sculptures, and off the beaten path.”

The surrounding area outside Aphrodisias is filled with tobacco and olive farms that support the village of Geyre. The village, in turn, supports the excavation work during farming’s off-season. Roughly 100 workers are hired to help with the manual labor and given fair pay and insurance in return. Over the years, the relationship between the village and the archaeological team has grown, and Harry has attended weddings and other major ceremonies for those who have become like extended family.

The work to salvage and preserve the art and architecture of Aphrodisias is physically exhausting, tedious, and at times emotionally draining. The desire to save everything is often met by the reality that not all the beautiful pieces will be preserved and displayed.

“Every summer, we find so many marble sculptures that would be a significant piece for any museum but we just don’t have the funds or space to preserve them. So we document them, photograph, study, draw, and then they end up in a depot rarely seen again,” Harry says. This is one reason Harry’s role in the excavation is so important. It is also the reason that those working on the dig believe so strongly in the importance of their labor.

Each year Harry’s team of students is responsible for documenting the sculptures, buildings, roads, and miscellaneous artifacts found during the excavations. They have a three-part process: survey, field drawing, final drawing. The process is an interesting intersection of architecture and archaeology since, in architectural terms, they are creating “as-built drawings.”

“Out there, the hand drawing is alive and well!” Harry says. 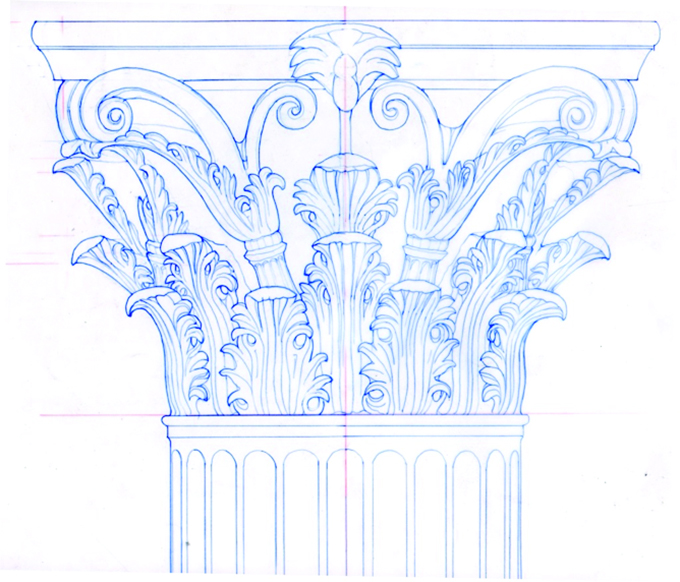 To begin the documentation, they use modern surveying equipment to pinpoint the site of where the object or building was unearthed. They use this information to show the orientation and relationships in their drawings. The field drawings are all about exactness and detail, so beginning with an accurate survey is critical.

The process of creating these drawings is when Harry’s passion for this project lights up.

“I love the process!” he says, almost giddily. “It’s 100 degrees out there, with no shade, and you have to take precautions not to sweat on the drawings.” In the sun and the dry conditions of the dig, the team draws at a 1:25 or 1:50 scale with a pencil, a large drawing board, and gridded graph paper at a millimeter scale. After ruining a few weeks of work, Harry learned the hard way how to protect his drawings —knowledge that he passes onto his student team. He keeps a towel under his arm, wears fingerless gloves, and carries the board on his hip to keep his arm from rubbing the drawing. He also wears long sleeves and long pants to help keep the sun off. 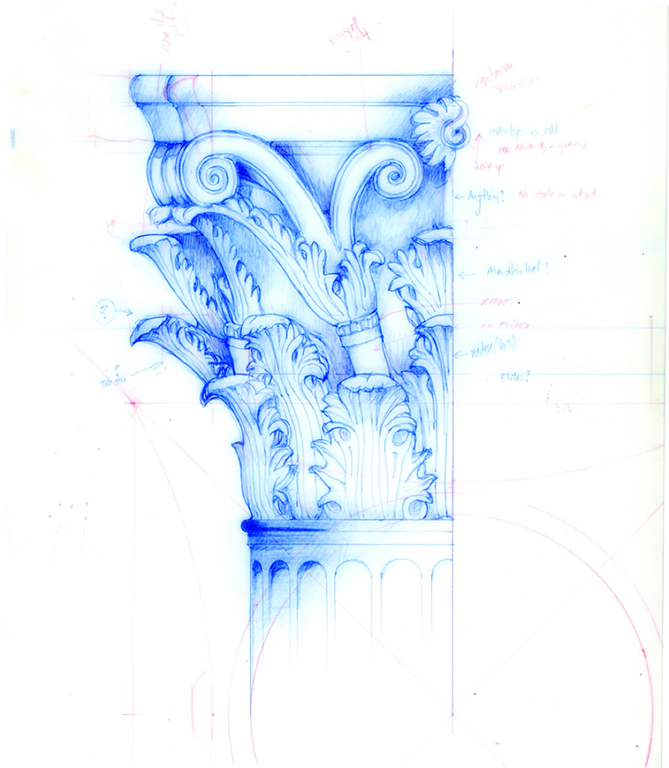 They draw each individual stone in the exact condition it was found. “You begin to learn your own techniques. I know my shoes that I wear on site are 28.5 centimeters, and I have units ‘Harryed’ on each side so I can measure with my shoe.”

Throughout the summer, Harry does critiques of the student drawings to help teach. He wants his team to draw once, be precise, don’t erase, and don’t use shading for emphasis. As much as they try to make the drawings look consistent, “the hand drawings still have personality,” Harry says.

Final drawings are for publication and display. “Ten years ago, these were ink on mylar and three meters long. Now we only do ink on mylar for sculpture and pottery.”

The field drawings are typically scanned and used as a background to trace using AutoCAD and Adobe Illustrator. The students use laptops and work on these drawings in a studio they set up on site. Sometimes they finish the final drawings throughout the year off-site. All the drawings, both final and field drawings, are archived at the Ashmolean Museum at Oxford University and the Institute of Fine Arts at NYU.

“In 25 years, I've seen how the elements can destroy the antiquities. Our drawings might be the final record ever of these buildings. We are preserving a legacy so the buildings can live on in our drawings,” Harry says. 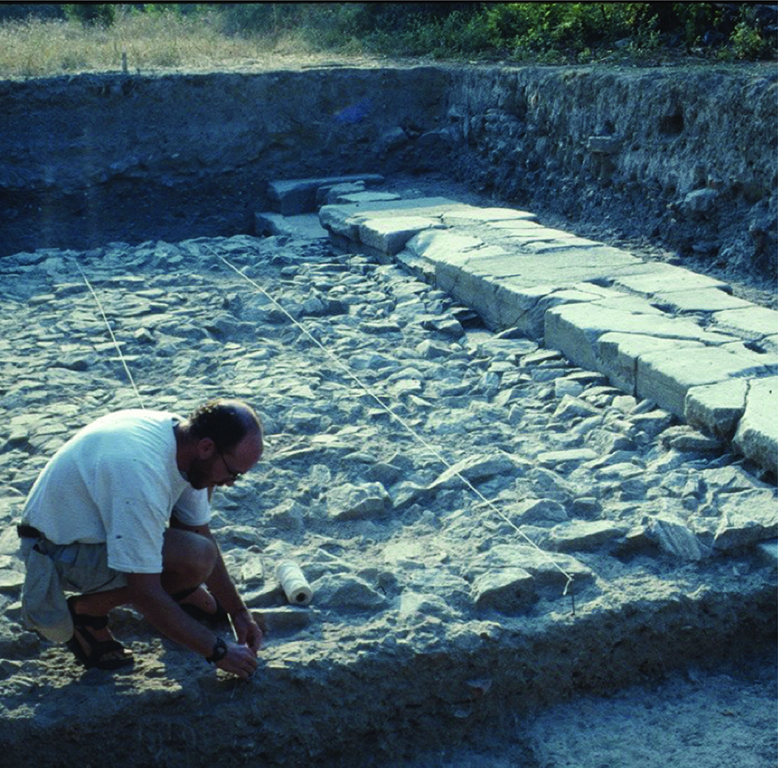 Every year is different, but Harry’s summer trips to teach and volunteer are a constant. “It puts life in perspective and it's rewarding professionally, spiritually, and personally.”

For the first ten years, he spent every June, July, and August at the site. Now it's a more of a balancing act to volunteer and manage his practice. He now spends three and a half weeks weeks at the beginning of summer and three and a half weeks at the end in Aphrodisias. Fortunate to have patient clients and business partners, he works on final drawings throughout the year.

Funding is almost entirely through private donations, mostly from patrons, as both private foundations and individuals, who also believe in the value of learning from antiquities. In some cases, a particular site or sculpture may be so significant to a donor, they will personally fund the entire excavation and conservation. 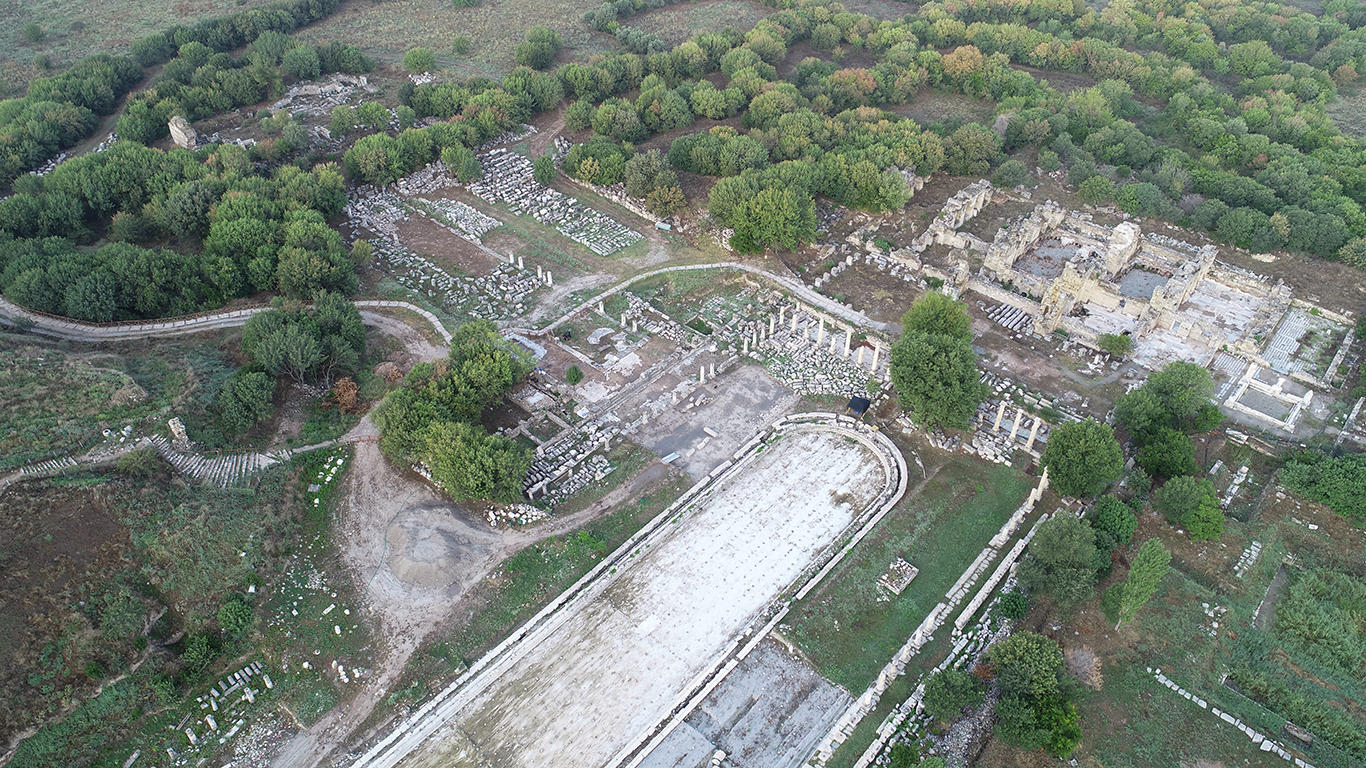 When funds are available, they will make a plaster cast of the sculptures to help re-create the experience seeing the work in context. They also use their drawings to rebuild portions of Aphrodisias’ significant structures, slowly putting together a sense of the former Greek and Roman life. The viewable buildings include a variety of homes, the theater, stadium, and the recently excavated Hadrianic baths. The excavation and preservation in place of the Hadrianic baths were personally funded by a single donor and is just one example of how significant the role of the donor support is for the team in Aphrodisias.

Conversely, when funds are unavailable, the best option for sculpture is to document and store it away in a dark depot for protection. Building antiquities such as mosaics and architectural features, however, are reburied after being documented and studied — the best affordable means of preservation.

There is a small museum on-site to display some of the work found, but most items that aren’t reburied are stored in a warehouse. Harry recently designed an addition to the museum, but it still cannot possibly display everything.

Harry laughs at the idea of being an architectural Indiana Jones.

“I think I was a little influenced by Indiana Jones at the time,” he says of his first year to volunteer. After 25 years of working on this project, his passion and shared goals are the same. 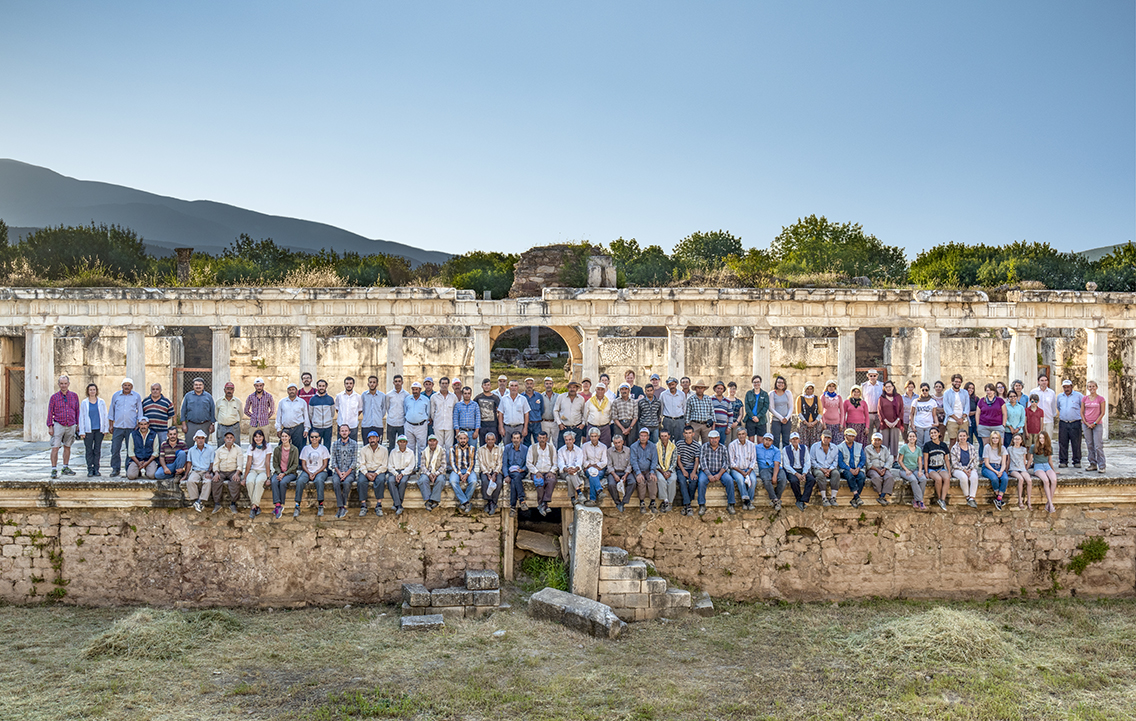 Each summer, the team is composed of approximately 35 students and professors from more than 12 international universities, with assistance from up to 75 local skilled craftsmen. / Photo courtesy of New York University Excavations at Aphrodisias

With pencil and paper, Harry can document a culture that is not yet lost so future generations can learn from the drawings and beautifully preserved archaeological site.

“It's not about creating something new,” he says. “It’s about revealing something that needs to be revealed.”

Jenny Thomason, AIA is a senior associate at Omniplan and associate editor of Columns.