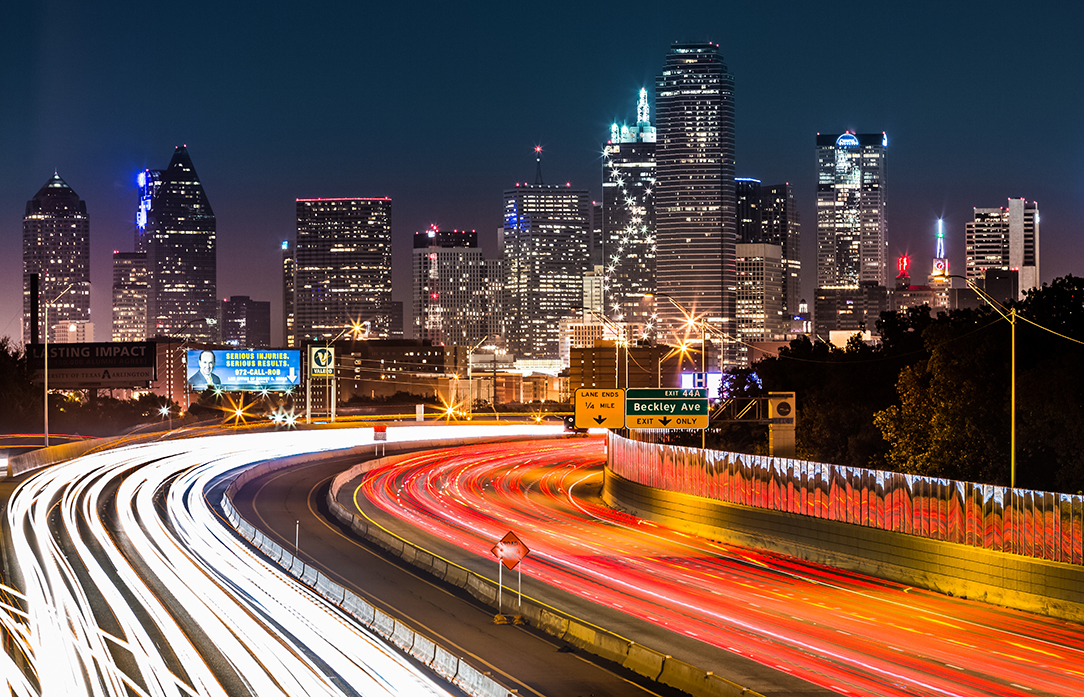 Mobility, Sprawl, and the Future of North Texas

Mobility, Sprawl, and the Future of North Texas

Before JFK’s assassination changed the path of Dallas’ future, our sunbelt city began a major shift unabated even by the soul-searching tragedy. The Federal Highway Act of 1956 and the interstate highway system—in conjunction with Texas’ state system of spurs, loops, and highways—decentralized growth in North Texas and pushed development further and further from our core. Today, Dallas/Fort Worth is the fourth most populous metropolitan area in the U.S., ranking just below New York, Los Angeles and Chicago.

Sprawl has not only made us automobile-dependent, it has changed the organization of our neighborhoods and eroded our culture by chipping away at connectivity. A ten-block walk to the grocery store, common in the early ‘50s, all but vanished as our lifestyles morphed to accommodate the assumption that we must drive to our destinations. This cultural shift is evident in our regional architecture. Our building programs are centered around the automobile, higher parking requirements, and singular zoning regulations.

Sprawl gave us a different way of thinking about what we do and where we go. When Raymond Nasher opened NorthPark Center in 1965, it was the largest climate-controlled retail establishment in the world. Surrounded by surface parking lots, and eventually larger parking structures, this elegant center produced no connectivity beyond its property lines. Today, the 2.3 million-square-foot structure accommodates 26 million visitors a year with more than 235 stores and restaurants. The intrigue and success of concepts such as this led to further changes. By the 1970s, zoning practices in North Texas changed to support residential neighborhoods that included clusters of strip centers at the intersections of major arterial roadways. During this era, the population growth rate in Dallas was cut in half from 10 years prior while Plano experienced a 300% annual increase and Arlington a 400% increase over the previous decade’s rate. Opportunities for cheap development further from our core became easily attainable through the highways produced via the 1957 Thoroughfare Plan, the brainchild of Marvin Springer, Dallas’ first full-time planning director.

Automotive-dependent growth continued as planned communities came into vogue and began popping up in suburban areas. Developer Ben Carpenter’s Las Colinas to the west of the city became one of the earliest planned communities in the 1970s. It experienced major growth during the 1980s construction boom. Carpenter displayed exceptional vision at that time, imagining a people mover system that would ferry business professionals throughout the Las Colinas community. His plan was to extend the people mover from Las Colinas to Dallas/Fort Worth International Airport so that people could leave their cars at work and simply hop on the transit system—a dream foiled by recession and slowed growth of the business community. However, EDS followed suit with a corporate campus at Legacy Plano which led to many new corporate relocations to the far north suburbs. These campuses provided for low-density with large parking structures and increasingly higher parking requirements, driven by market needs. All of this growth continued to fracture the urban core.

The architectural culmination of sprawl and its impact on consumerism is visible in the advent of big box retail. They became dominant in the late 1980s as they were the most utilitarian and efficient response to the zoning changes of previous decades. These hulking buildings litter the access roads of North Texas highways and are universally considered unsustainable due to their land use requirements, rain water run-off, and automobile-focused planning.

North Texas had spiraled away from developers Hugh Prather and Edgar Flippen’s Highland Park Village, a quaint predecessor built in 1931 and recognized by the Urban Land Institute as the first planned shopping center in the United States. As Jane Jacobs wrote in The Death and Life of Great American Cities, “As a sentimental concept, ‘neighborhood’ is harmful to city planning. It leads to attempts at warping city life into imitations of town or suburban life. Sentimentality plays with sweet intentions in place of good sense.”

What To Do with Sprawl

The North Dallas Corridor Study, completed in 1979, was an early attempt to determine the implications of sprawl. The study, funded by Dallas, Addison, Carrollton, Plano, and Farmer’s Branch, turned out to be “grim reading,” according to the late David Dillon who was then architectural critic at The Dallas Morning News. The plan showed that, if development patterns continued at their present rate, it would require investing about $200 million to upgrade existing roads and build new ones. Interestingly, the study also concluded that North Dallas could not ever develop the density necessary to support mass transit unless some efforts were put in place to manage and control commercial sprawl. Little did they envision the success of the Dallas Area Rapid Transit (DART) system. The creation of DART in 1983 was a result of regional collaboration among Dallas’ neighboring communities that voted to levy a 1% sales tax - for the creation of a regional mass transit system. This public rally was the impetus for accomplishing a part of Mayor J. Erik Jonsson’s Goals for Dallas, a carefully designed and integrated public transportation system for the future.

The turning point for mobility in relation to future developments came with the opening of the first light rail lines in 1996. This is most apparent in the construction of Mockingbird Station in 2001, the first transit-oriented development in the state. Developed by UC Urban and Hughes, and designed by RTKL with Selzer Associates Inc. and Envirodesign, Mockingbird Station integrated existing buildings into a mixed-use, dense node that succeeded both in creating an active work/play/live environment and in serving as a successful case study for future developments in the region.

Today, DART’s fleet of busses and light rail vehicles traverse Dallas and 12 North Texas suburbs. DART is now the largest light rail operator in the United States, covering 90 miles. Interestingly, many of its routes follow streetcar paths from the past. DART’s green line, for example, carries passengers through Deep Ellum and the neighborhoods by Baylor Hospital to Fair Park. DART’s Fair Park Station is situation in the same location as the original Fair Park streetcar stop.

As sprawl continued to seep deeper and deeper into the fabric of North Texas throughout the ‘70s, a new plan, Dallas 2000, was spearheaded by Jack Schoop, planning director for the City of Dallas from 1979 to 1983. The goal was to develop a comprehensive land use plan for the city. Hundreds of citizens were engaged in the plan, spending thousands of hours studying current issues, including mobility problems and unbalanced growth, and envisioning the needs of the next century. Dillon dismissed the work. “Like other comprehensive planning efforts, it got nowhere,” he said. “Developers dismissed it as wimpy utopianism, and the city manager’s staff privately regarded it as a joke.”

The rise of smart growth in the early 1990s has influenced our thinking. The American Planning Association’s 1997 publication Growing Smart Legislative Guidebook: Model Statutes for Planning and the Management of Change began a shift towards ebbing city sprawl. The Congress for New Urbanism (created in part by Andres Duany and Elizabeth Plater-Zyberk of the architectural firm Arquitectonica) pioneered efforts for the modern implementation of form-based codes.

The earliest and best example of this is the Seaside Code that regulated the development of the town of Seaside, FL. These codes are implemented by traditional municipalities, but are favorable to developers in the creation of flexible projects and a wider range of land use. In North Texas, this method has been prevalent in planned development zoning in both areas of new growth in suburbs including the wildly successful town center portion of Legacy Plano and the forthcoming CityLine development along DART’s red line in north Richardson, as well as within neighborhoods and districts in the city core that have begun flourishing in recent years.

Crescent’s newest mixed use office tower in Uptown, designed by Cesar Pelli, FAIA, serves as a trend towards architecture that better engages pedestrian activity. Located on a three-acre site, the design allocates a significant amount of land for smaller scale urban-friendly retail and green space. In a Dallas Morning News interview, Design Principal Gregg Jones says, “Twenty to 25% of this site is not built on and is non-revenue generating.”

Another example is evident in Victory Park’s renewed commitment to make the planned neighborhood successful. This includes efforts to redirect traffic to fit the area’s circulation needs and to improve pedestrian traffic. Smaller scale infill is expected as well to enhance the urban fabric. Last April, Phil Puckett of CBRE Group told Dallas Morning News: “This means people will actually be living at Victory Park day and night, which means that Victory Park will soon be able to support retail that it never could before.”

Great architecture is made when it responds effectively to its surroundings. As a result our city and its architecture have been shaped by the automobile and by the infrastructure that has paved the way for development. With 1,000 people moving to Texas every day, our job as architects and influencers of the built environment is to guide North Texas development towards success. We can do this by heeding the lessons learned from bad planning, unconnected neighborhoods, and unsustainable design practices, and by leading future projects to incorporate multiple means of mobility.

Sprawl is inherent with growth. However, the opportunity to construct it wisely is ever-present.

James Adams, AIA, RIBA is a senior associate with Corgan.