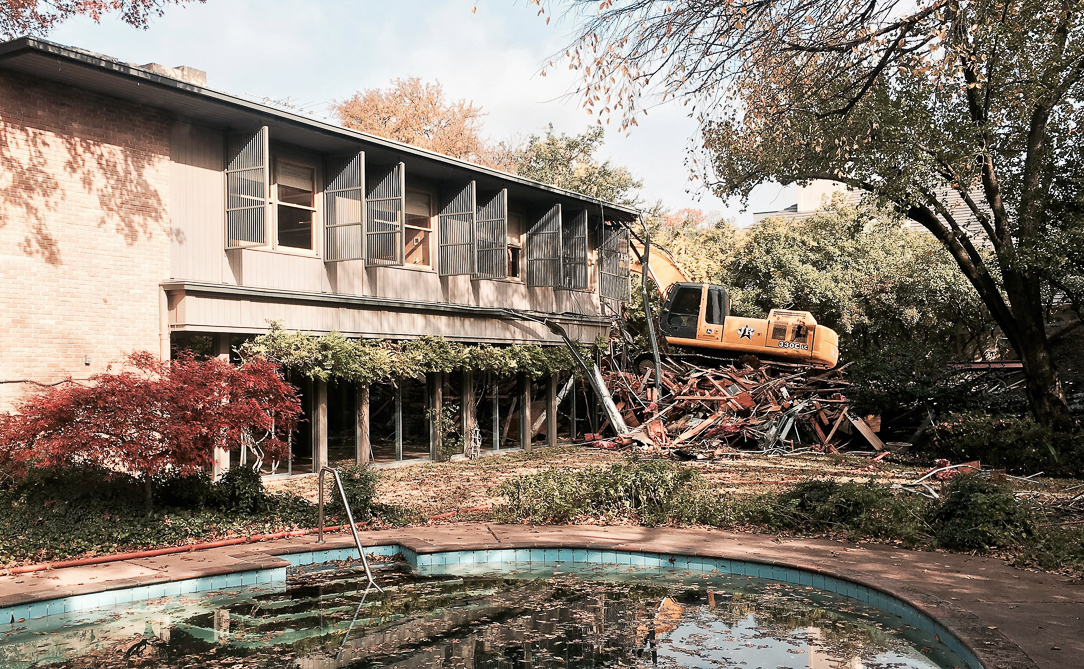 Plowing Through the Park Cities

Lately, both University Park and Highland Park—better known as the Park Cities—have been suffering from a rash of unfortunate demolitions of significant architect-designed historic homes. The land values have increased so much that the structures are worth very little compared to the land, which makes it easy for developers and property owners to scrap what’s there and start over. Another factor leading to demolition is many structures are located on highly desirable lots along Turtle Creek or they back up to the Dallas Country Club. Regrettably, both cities have no legal mechanisms to protect historic houses, such as those in place in the City of Dallas. 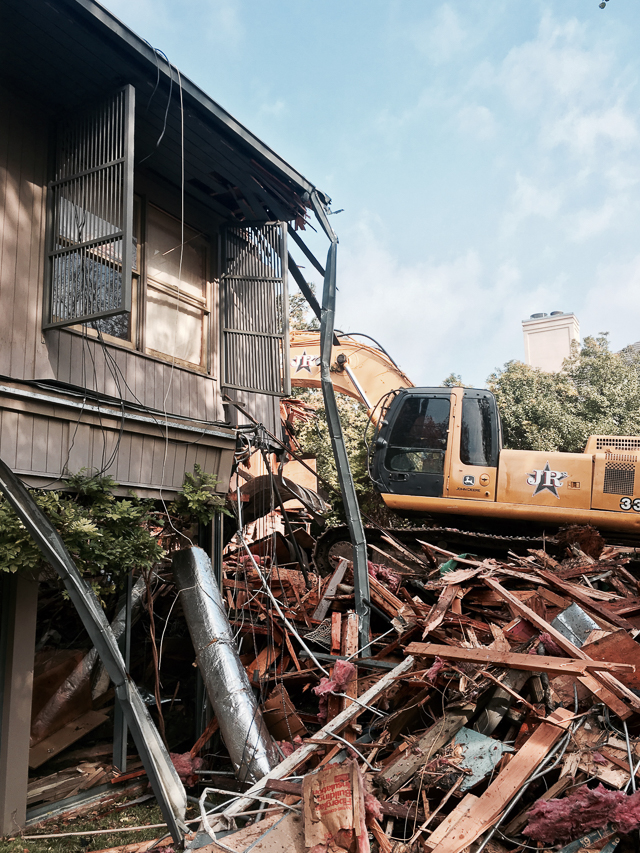 Erasing the history of the Park Cities is easy as there is no way to protect historically significant houses like the O’Neil Ford designed Penson House. The 1954 house was one of Ford’s largest residential projects and designed in his hallmark Texas Regionalism style. Credit: Preservation Dallas

In September 2016, the house designed by O’Neil Ford, FAIA at 3756 Armstrong Ave. in Highland Park went up for auction. The hope was that someone would purchase the house (built in 1954 for Jack and Nancy Penson) and restore it to its full grandeur. That was not the case; the purchaser demolished it three months later. One of Ford’s largest residential projects, the 9,800-square-foot house was designed in his hallmark style: Texas Regionalism. The exterior and interior remained very close to the original design with the exception of a second story addition, a master bath expansion, and enclosure of a rear porch. Its location on an impressive corner lot across the street from the Turtle Creek tributary and directly across from Davis Park made it a highly desirable lot. After the demolition, the lot was put on the market for $1 million more than the purchase price for the property, making this significant house worthless in the eyes of the buyer. 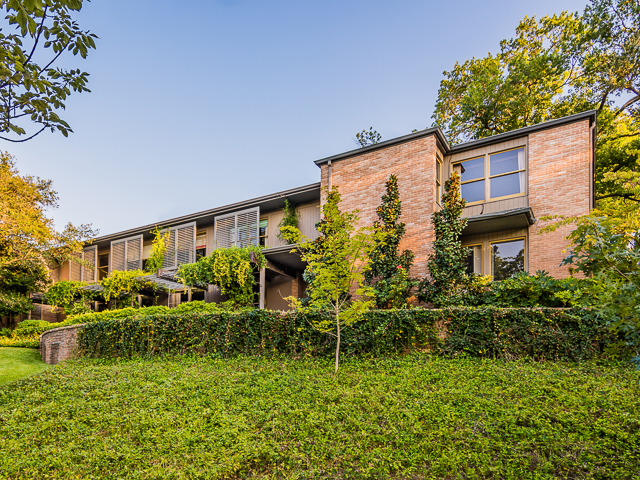 At the end of 2016 the Penson House was demolished and the empty lot put on the market for $1 million more than the house and lot were purchased for at auction a few months earlier. The house was an excellent example of a later version of O’Neil Ford’s Texas Regionalism style. Credit: Michael Cagle

An even larger house, with a list price five times the final price of the Penson House, met the same fate with a demolition that occurred in February 2017. The house at 4500 Preston Road in Highland Park was located on six acres along Turtle Creek. Completed in 1912, the 10,000-square-foot house didn’t stand a chance against the demolition crew that leveled it in a matter of days. The Tudor style mansion was designed by architect C.D. Hill. Hill is particularly remembered for his design of the 1914 Dallas Municipal Building. The home was completed for Henry Lee Edwards, co-founder of the Dallas Country Club. It later became home to Trammell Crow in 1961 and remained in the Crow family until it sold to the current owner. Now the lot is vacant and ready for new development.

One extremely significant house which is still holding on—for now—is located at 3805 McFarlin Blvd. in University Park. It was designed by architect David Williams in 1932 for University Park Mayor Elbert Williams. David Williams is considered the father of Texas Regionalism. O’Neil Ford also worked for Williams, and no doubt picked up his love of the style from Williams. The Williams house is considered the premier example of the style, even gracing the cover of a book on Williams’ work. The home was his last residential project and contains all his hallmarks, including hand-carved interior woodwork by Lynn Ford (O’Neil Ford’s brother), a mural by Jerry Bywaters, and abundant lone star ornamentation, as all true Texas houses should have. With only two owners the 6,000-square-foot house remains remarkably intact with original details on the exterior and interior and a layout almost identical to when it was built.

As of this writing, the house is vacant and could be put up for sale or auction in the near future. The threat to the house is extremely significant as it sits on 1.15 acres of prime University Park property. Making the land even more valuable and desirable is that it runs along the Turtle Creek shoreline abutting the Dallas County Club golf course. The fate of this extremely important house is up in the air, and if it goes to market or auction, there is no way to stop a buyer from demolition if they don’t appreciate the significance of the house. 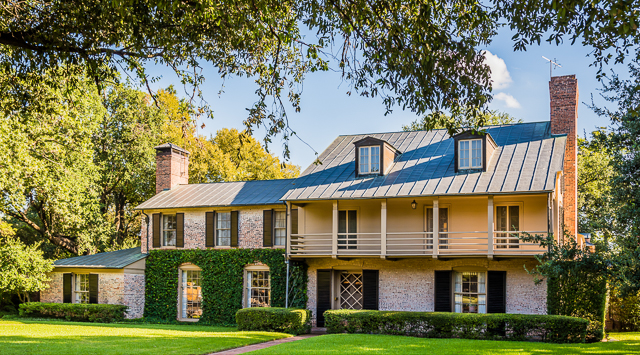 The Williams House in University Park is considered the premiere example of the Texas Regionalism style. For now, the house is holding on; however, it is vacant and if put up for sale or auction someone could buy and demolish the house on the highly prized lot as there is no way to legally protect the house from demolition. Credit: Michael Cagle

Will the tides turn in the Park Cities? Will city leaders enact protections for their significant historic buildings? Probably not, unless there is pressure from the residents of each city to pass such protections. Until then, more and more historic fabric will come down for new construction. Every remaining significant historic house becomes even more precious in the Park Cities—and presumably more valuable. However, that doesn’t seem to matter to developers or property owners who only want to maximize the return on their investment—at the expense of the architectural heritage of Highland Park and University Park as well.