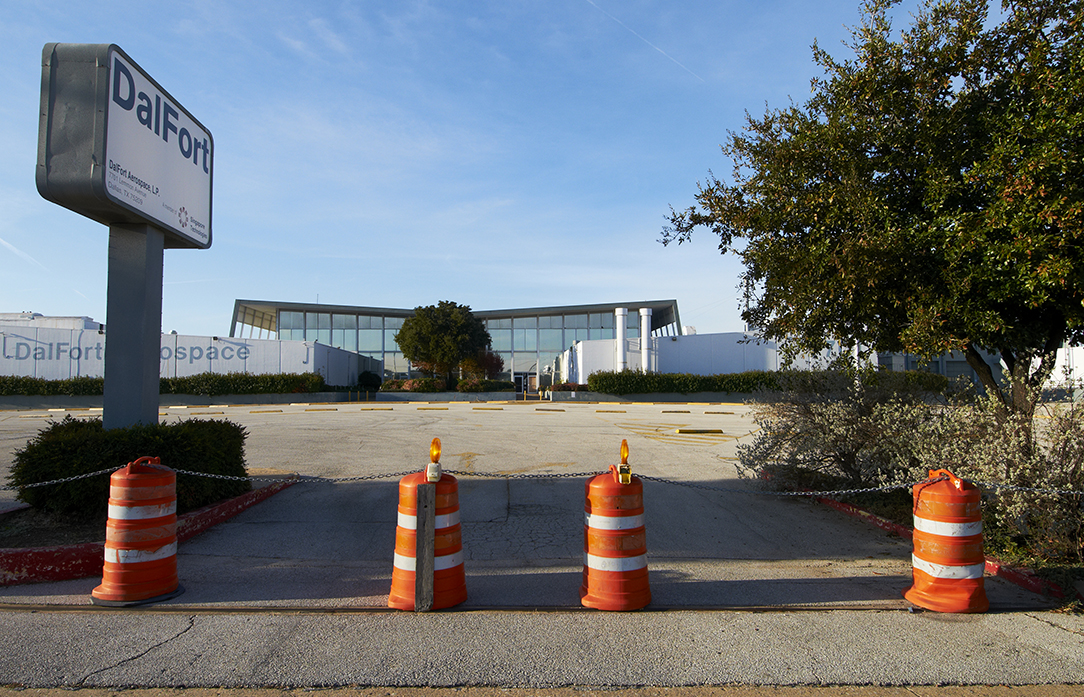 Braniff International Airways was a cutting-edge airline with an emphasis on design, evident by its hostess uniforms, airport lounges, plane liveries and interiors, and buildings. Designers Alexander Girard, Emilio Pucci, Alexander Calder, and Halston all provided designs for Braniff. Famous architects were also called on by Braniff, including the Los Angeles firm of Pereira & Luckman that designed the Braniff Operations and Maintenance Base at Love Field, one of the best pieces of mid-century aviation architecture in the country. What could have been just a non-descript hanger to service aircraft turned out to be a highly designed and cutting-edge modern facility that embodied the spirit of flight in its architecture.

The Operation and Maintenance Base, or OMB as it was called, opened at 7701 Lemmon Ave. in 1958 to serve as the maintenance center for the entire fleet of Braniff aircraft. It included two hangar bays, repair shops, testing laboratories, training facilities, a reservations center, a dining center for employees, a prep center for flight meals, and offices. There was even a room to test jet engines. Utilizing an overhead track, the engines were removed from the planes and delivered to a special testing room with reinforced walls and a three-foot thick blast door.

The massive 400,000-square-foot building is supported by a skeletal structure of 2,850 tons of steel on caisson foundations. Long-span trusses are supported by two columns, thus eliminating traditional cantilever construction. As described by chief designer and famed architect William Pereira, the structure has no internal load-bearing features to allow for maximum interior configuration and the flexibility to move walls as needed to create different office configurations.

From the street elevation, an entire floor is hidden below grade to accommodate the sloping site. Over 22 feet or 216,000 cubic yards of rock and dirt were excavated to shape the slopping site to allow the hangar floors to be at runway grade and the main public entrance to the building to be at street level. This was the largest excavation project to date in Dallas.

The dominant design element of the building is the central core with an inverted roof flanked by sloping hanger roofs on either side. These primary, slightly angled, forms are composed with rigorous symmetry—a fundamental precept of the aviation industry—and are distinct references to the geometry of aircraft wings. The spaces below the soaring roofs are enclosed with combinations of aluminum and glass curtain walls, aluminum panels, and cement plaster—all quietly detailed and often recessed to emphasize the dominance of the roof forms.

Not only was the architectural design significant, but the engineering as well. The building used 1,160 tons of air-conditioning to cool the spaces, including the hangar bays, which was a first in an aviation maintenance hangar. The entire building had sprinklers installed for fire suppression, done well before the now common code requirement for commercial buildings. The hangar openings are an impressive engineering feat with 35-foot-tall doors which roll completely into pocketed gussets to reveal a clear horizontal opening of over 400 feet, the largest of the kind when built.

Over time, the building was expanded and portions of the interior reconfigured for different uses. However, the building still maintains much of the original features and integrity that made it such a cutting-edge design.

Today the building sits vacant and in 2012 was threatened with demolition. Luckily, several groups banded together to fight for its survival and prevailed. Now plans are underway for redevelopment of the OMB with new uses while maintaining the spirit and intent of the original design, preserving its place as one of the most significant aviation buildings surviving from the 1950s.