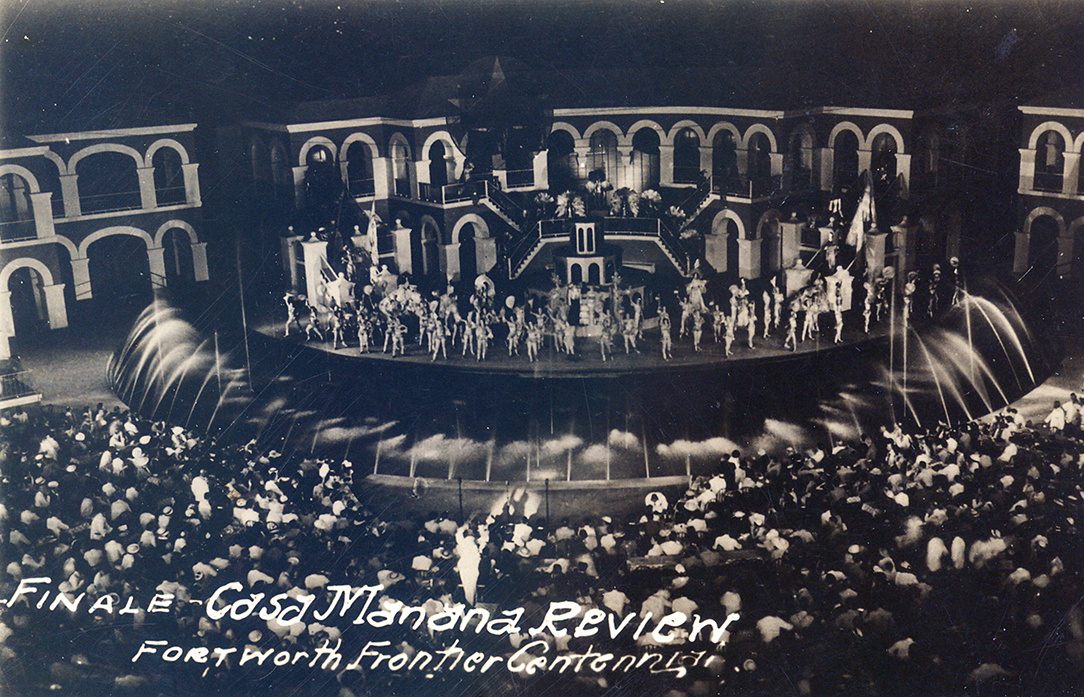 Capitalizing on the 1936 Texas Centennial Exposition in Dallas—and wishing not to be outdone by Dallas—Fort Worth opened its own fair the same year and named it the Frontier Centennial. It was touted as the “fun” fair, as opposed to Dallas’ hosting of the “educational” fair. A large sign outside of Fair Park advertised the fair as “Wild and Whoo-pee” 45 minutes west.

The Frontier Centennial was the brainchild of Amon Carter and a group of local business leaders who hired New York master showman Billy Rose to organize the fair and its many colorful activities. The centerpiece of the Centennial was Casa Mañana, a 4,000-seat amphitheater and café built to hold the “Frontier Follies.” 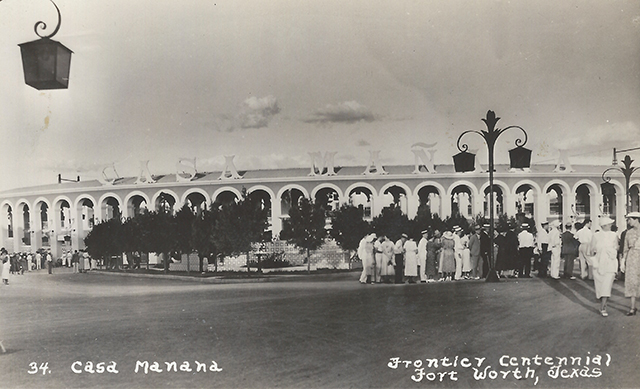 Fort Worth architect Joseph Pelich was hired to design the mammoth building, which contained the world’s largest revolving stage: 130 feet in diameter and weighing 17,000 tons. The stage sat in a 130-foot by 175-foot tank of 9-foot-deep water, which gave the appearance of a floating stage. The center of the stage had a permanent theatrical set, two bandstands and dressing rooms for the performers. Mounted on the front rim of the tank were 43 pipes which shot geysers of water that created a “curtain” effect when turned on during the performance. Richard Bruckner designed the engineering for the stage system which could revolve in under two minutes and slide back and forth with the help of two 450 horsepower motors, one to propel the stage forward or back and one to rotate it. 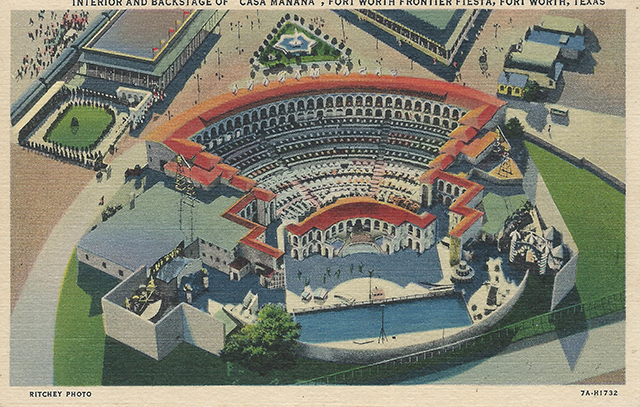 Architecturally, the amphitheater favored the Spanish style and even had a Spanish name meaning “house of tomorrow.” Over 30 blue and white Spanish-styled arches rose nearly 30 feet to the roof and stretched over 280 feet around the curve of the 320-foot façade. The arches and roof covered two levels of horseshoe boxes and a 50-foot bar, which was dubbed the world’s longest. Patrons passed through the arches into the open air on the other side where 19 graduated tiers of seating spread out towards the stage at the lowest level. Each tier held tables for the customers to dine while viewing the performances. Smaller arches with double tiers framed the perimeter of the outdoor seating area and extended to the stage, which created an enclosed atmosphere. 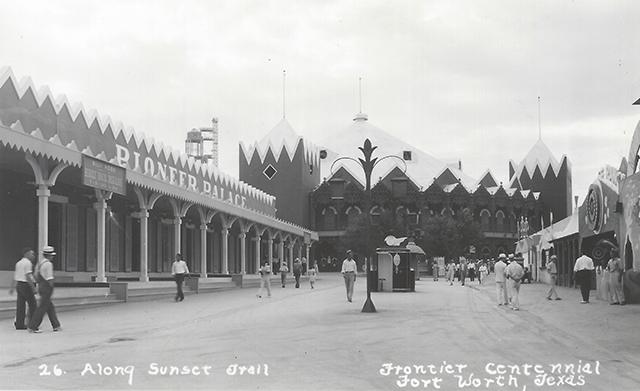 After the centennial closed, Casa Mañana continued to operate by offering various types of performances.  However, with mounting costs, sagging ticket sales, and the looming world war, it closed after the 1939 season. Unsuccessful campaigns to reopen the facility in 1940 and 1941 failed. The temporary nature of the original structure showed itself as it began to fall apart due to lack of maintenance. In 1942, the structure was demolished, although the stage machinery remained for many years on the property. The demolition was not the end of Casa Mañana though. In 1958, a new Casa Mañana opened near the site of the old one. This time the design featured a fully enclosed geodesic dome over a theater in the round. The building was designed by A. George King and Associates with the geodesic dome developed and designed by Kaiser Aluminum Corporation. 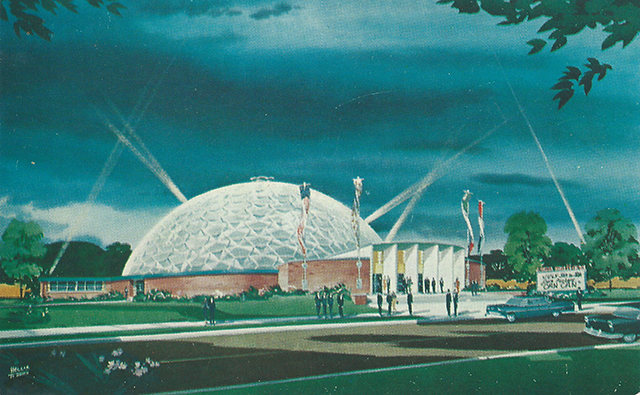 In addition to Casa Mañana, the Frontier Centennial featured several other buildings and themed areas including The Last Frontier, Pioneer Palace, an enclosed theater for the Jumbo performance, and The Sunset Trail. There were numerous sideshow attractions at the centennial; however, none more popular or controversial than Sally Rand’s Nude Ranch. The ranch building featured “Venus-like” female figures, arms outstretched, holding up the roof of the portico. The roof supported a sign made out of individual letters which spelled “Sally Rand’s Dude Ranch.” The “D” in “Dude” was crossed out and the letter “N” was affixed above it. Inside the ranch were bare-breasted women wearing cowboy boots, hats, and holstered six-shooters who sat on horseback, shot arrows at targets, tossed horseshoes, and more. 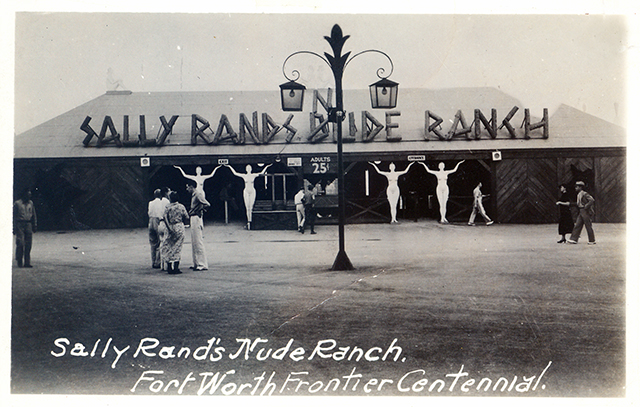 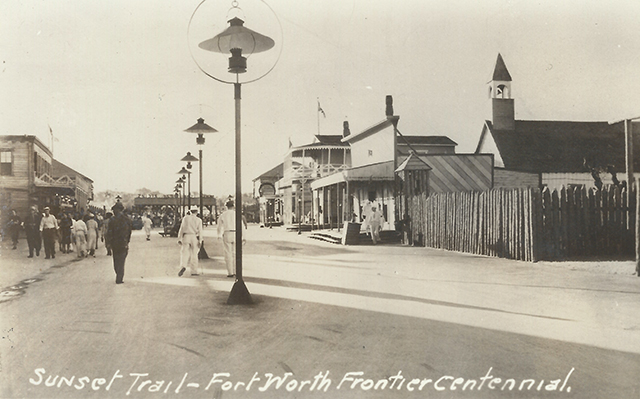 There has always been a rivalry between Dallas and Fort Worth and that was never more apparent than in 1936 when each city celebrated the centennial—in completely different ways. They vied for crowds during the height of the Depression when people wanted to escape the reality of their difficulties. In true Texas fashion, there was a choice: Dallas for a grand experience that celebrated the history of Texas or Fort Worth for an entertaining and risqué time which celebrated the wild frontier. 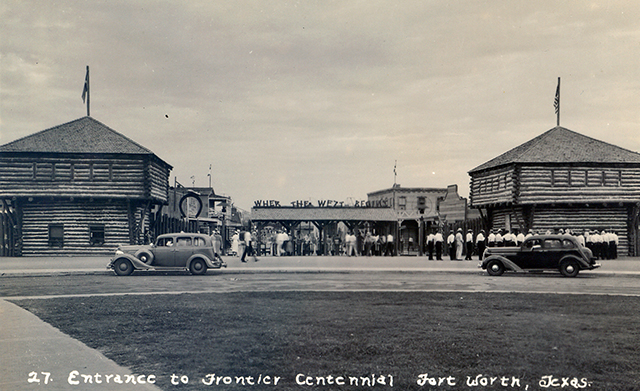 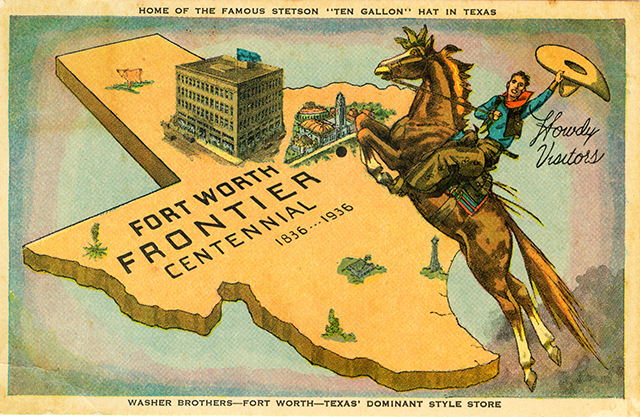 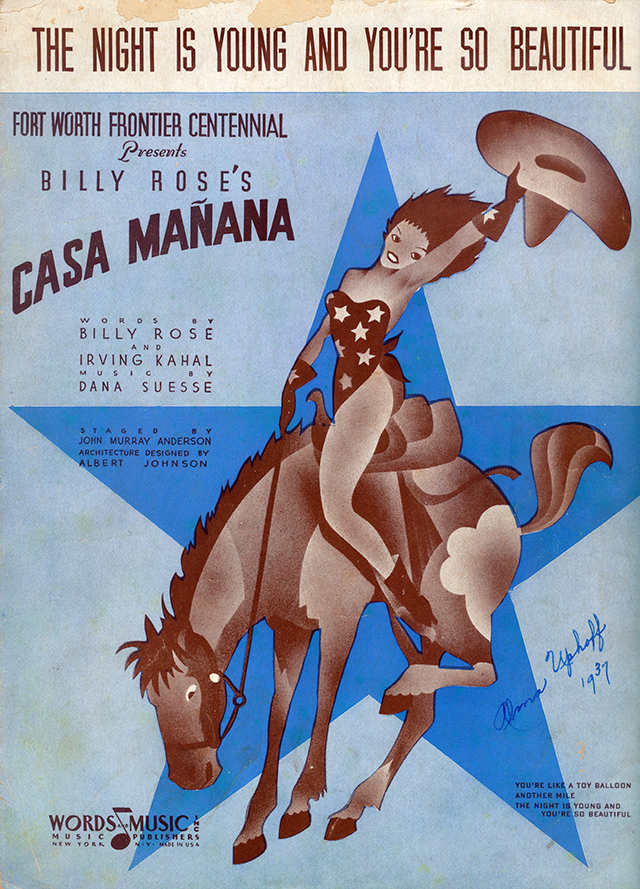