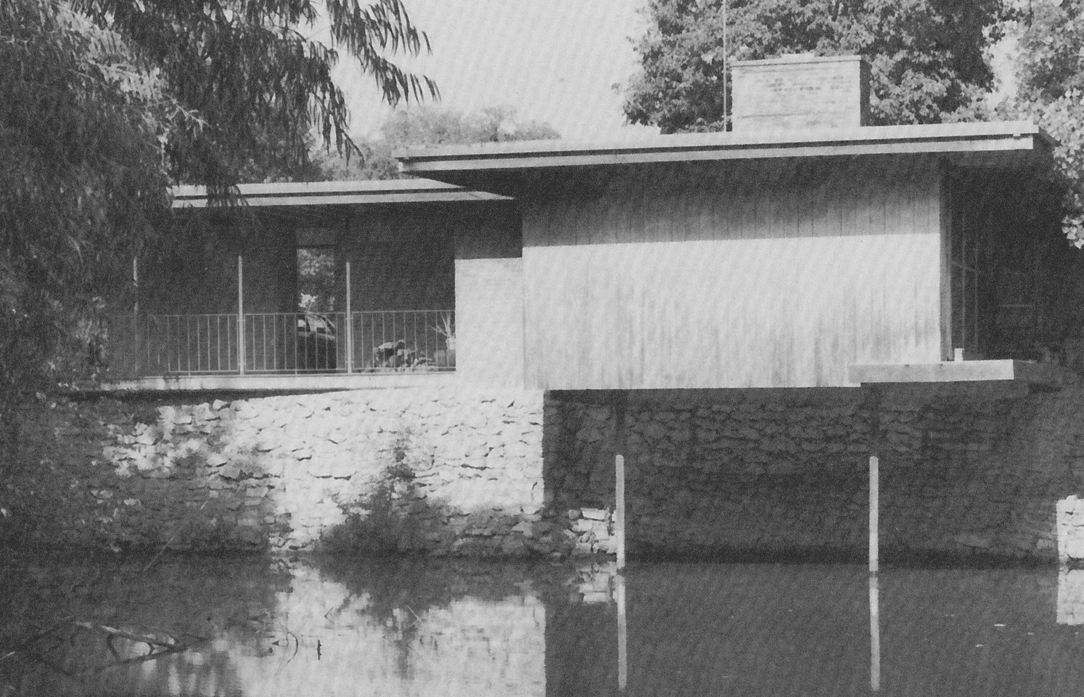 The house at 3615 Amherst was originally designed and built for Lon Tinkle, his wife Maria, and their three children. It sat at the edge of a picturesque lake in what became known as “Culture Gulch” at the beginning of Turtle Creek. The modest two bedroom house, designed by architect O’Neil Ford, was a masterpiece of simplicity and modern design.

Completed in 1952, the house had all the hallmarks of the modern style with open spaces, large expanses of floor-to-ceiling glass, and a flat roof with deep overhangs to shade the glass from the Texas sun. The house included a cross bream ceiling in the living room radiating from a central skylight with a single post centered under the skylight to support the ceiling. A library hovered over the lake with a 16-foot wall of shelves for Lon’s collection of 4,000 books.

A 1952 article in the Dallas Morning News said, “This house achieves the feeling of one room flowing into another, chief characteristic of a contemporary house, but its informality and design also brands it individually Texas.”

O’Neil Ford started his career with Dallas architect David Williams in 1926 after very little formal education in architecture. During the Great Depression, he worked on WPA projects and in 1937 formed his first partnership with Arch Swank in Dallas. Two years later, Ford moved to San Antonio and partnered with Jerry Rogers with whom he designed the campus for Trinity University in San Antonio (in partnership with Bartlett Cocke and Harvey P. Smith).

In 1953, the firm―known as O’Neil Ford and Associates―worked on a number of high-profile projects including Texas Instruments, with the best known work being the Semiconductor Building in Dallas, completed in 1958. A partnership was formed with Boone Powell and Chris Carson in 1967 leading to many more outstanding designs in Texas and around the country.

The Tinkle house remained in the family until 2013 when it was sold and subsequently demolished to make way for a much larger and grander home. The loss of the Tinkle House is tragic, especially due to its unique design by such an important Texas architect. Thankfully, there are still several Ford houses that survive in Dallas, such as the 1939 Bromberg house, which has been lovingly restored.