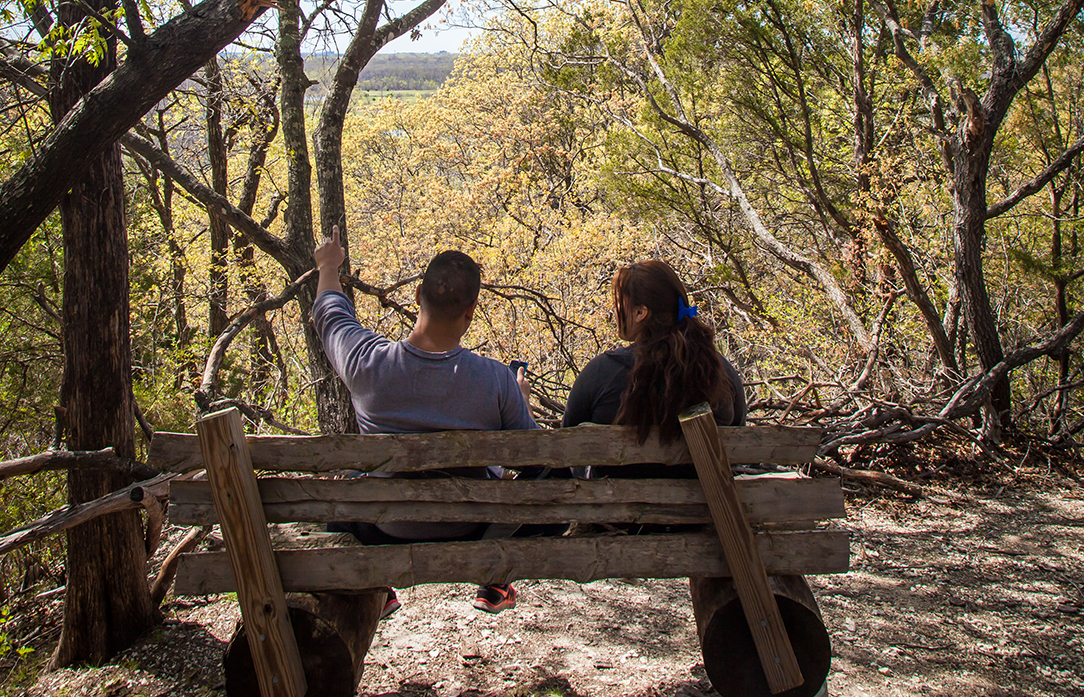 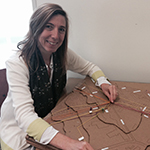 View the author’s TEDxSMU presentation on this topic

Why set up a city and nature in opposition? Consider these tired dichotomies: city to nature, dirty to clean, mechanical to natural, vertical to horizontal. Have they lost their relevance in our broad, expansive Texas city?

Most of metropolitan Dallas is structured like an agricultural landscape, itself a machine-like nature: fields of homes, regularly spaced, watered, and served by an infrastructure of piped resources and access road. And like agriculture, the network of fields is not fixed, but spreading and growing.

The pattern of our suburban landscape was built onto the underlying Texan agricultural geometry and was built in its scale; individual farmsteads were developed as subdivisions, each following the given land order. Greenville Avenue, where cross-streets just slightly don’t line up, is a memory of this agricultural history in our urban environment.

On the other side of the conversation, our city parks and landscapes are, in many ways, as artificial as any construct in our city: Vertical dams hold back straightened river waters, creeks are channeled into concrete dykes. The startling industrial remains of the Trinity River lock frame the hidden, flowing river like a romantic ruin in the rough undergrowth. Even the Great Trinity Forest is, in some ways, a forgotten land that has a gentle continuity with the un-remembered neighborhoods of South Dallas, a shared character, rather than a distinctive contrast. There is something gentle, and special, about this integration.

Can this reversal of the typical dichotomy become its own story? Maybe Dallas can be known as a city that does not set out to isolate its preserved land ecologies, but instead celebrates the interconnectedness of our city and its lands. Can we find strength and beauty in the seamlessness of this territory, and the continuity between its streetscapes and landscapes? In the search for models of landscape-urbanism in which urbanism grows from the landscape’s patterns, can we reveal Dallas to be a model city in which urban strategies have long been drawn from the shared infrastructures of our territory? Dallas can be celebrated as a land-city environment.

The tapestry of Dallas’ urban grid is a regular pattern, a tartan landscape, structured by the Jeffersonian land-grid. But just like a tartan rug, the land is also wrinkled, folded into itself at the crevices and curves. It offers natural interruptions in the horizontal plane with its ridges, its creeks and rivers. 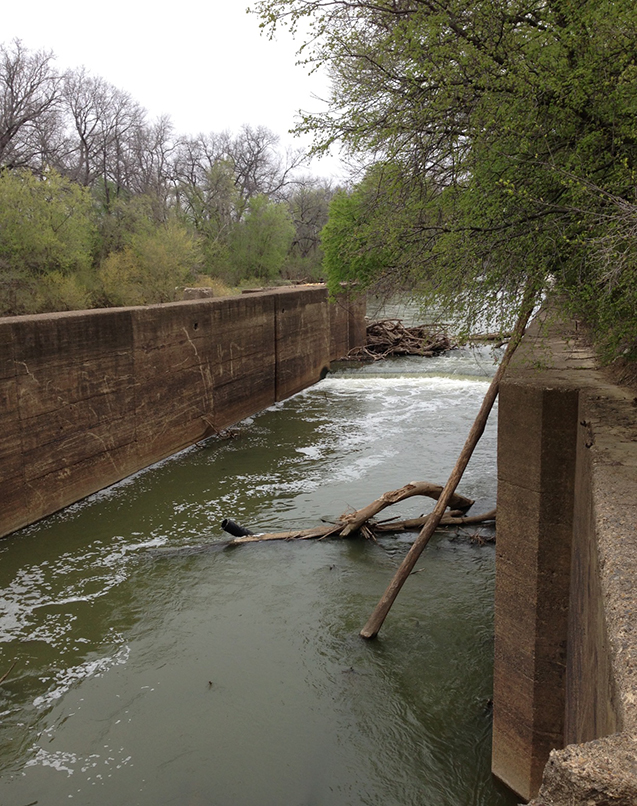 These interruptions become the sites of placemaking, canyon-cuts into the endless repetition of space, which create moments for community-gathering, sites for creativity and recreation, real civic spaces in the most basic meaning of the word: places where civilians gather, and share their cultural, social and community life. As designers in this city, our task is to draw out, purposefully, such folds, revealing them. These are the sites that give us opportunities for marking our civic connection to the city, through the overlap of infrastructures and their deep cuts into place.

Early 20th century city planner George Kessler himself set the standard and drew the first land-folds onto the Dallas map. Kessler—already known for his master plan of Fair Park—helped with flooding problems, replanned and restructured the logic of the numerous train tracks winding through the city, and urged the inclusion of more boulevards, parks, and plazas. Thanks to Kessler, Turtle Creek—a small, shabby waterway like its buried cousin, Mill Creek—was envisioned, and (unlike Mill Creek) built as a celebratory site. It is not a single park, but a series of park pauses, stretched along the travelling route through the city.

This original vision of the creek-park was as a set of places for gathering, adding character to its neighborhoods. This vision has been built upon through the years. The energies of the Turtle Creek Association, for example, extended its quality into the medians along the parkway: limiting lanes, but slowing traffic, reducing glare, and visually connecting the park to the neighborhood.

Further integration of community and creek was the development of Lee Park—at its most celebratory for the Easter concert and dog parade—in the form of the Lee Park and Arlington Hall Conservancy. Like Klyde Warren and Reverchon parks, credit for the animation of this park lies greatly in its programming; however, for each, there is also a carefully scaled quality of movement in this place. Turtle Creek is not contained as a plaza or square might be, but extended along a route, celebrating again the continuity of community and natural place, and the experience of that connection on foot. 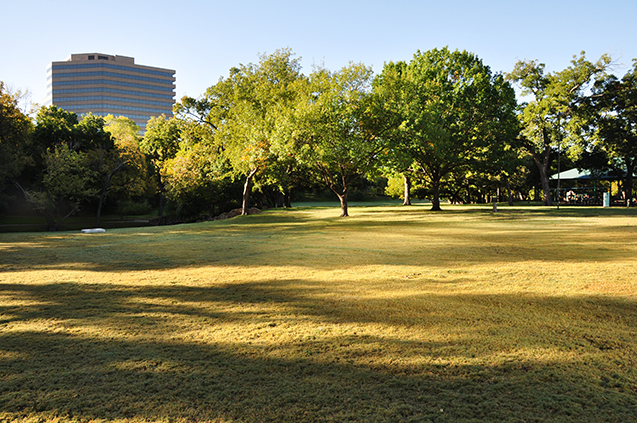 Choices made along Kessler’s Parkway may serve as a lesson to our city. Turtle Creek is not the Trinity Parkway; at least as it is currently designed and planned, it is not even similar. The possibility of pause, the tangible connection of footpath to road, land and water: This is the quality that makes the road at Turtle Creek subservient to its park; the primary order in its curving route is that of the river. The road is slow, winding, inefficient, and beautiful. Cars pause like pedestrians, and are stopped completely when the road is closed for community events. It is, first of all, public place.

The Katy Trail benefits from its early adjacencies to the Turtle Creek park system, interconnecting its trail-motion with glances to the natural flow. As they both flow northwards, the Katy Trail, in a way, underlines its resemblance by making, again, a series of small stopping places such as David’s Way and the drama of Thomsen Overlook—places of community pause along its extended route. David’s Way—a memorial to David Meyerson, son of arts patron Morton Meyerson—is a small plaza framed by delicate steel columns, each of which magically communicates with passing runners and walkers through motion sensor activated light and sound art. Like a refrain in a song, the trail makes a landscape out of sound and movement rather than out of stopping. Onto this trail—casually and naturally again like beads on a string—public places like gyms, bars, community spaces, and the active evening noise of the Ice House underline the integration of garden-trail and city.

The newly renovated White Rock Creek Trail, following north from the lake, again picks up the pattern. The tartan fabric of the city plan folds into a deep wrinkle, following the flood plain of the creek, as the trail winds its ways through the regular street grid of north Dallas. Instead of seeing this landscape element as an interruption in contrast to the grid, we can see it as the fold that makes the pattern most celebratory. A curved river in a curved landscape would not reveal itself as well as the twisted, curvy river cutting through our rigid agricultural land-structure. The cycle and pedestrian pathway creates a three-dimensional journey, wrapping cantilevered bike trails onto the undersides of bridge structures, bridging the river, diving below the flood plain level--and all along this fold are opportunities for placemaking: The liveliness of the Fair Oaks tennis center integrates community and trail walkers; soccer fields flow into family picnics and horse riding trails.

Yet other opportunities are missed. Why is there no connection, for example, between the active playing fields of Conrad High School and the flow of the trail? And what wonderful integration could be imagined between the Jackson branch of the creek and the hundreds of adjoining low-income apartment units alongside Skillman Avenue, if they were linked through the natural environment to the wider city?

The new Santa Fe Trail may serve as a barometer of change: This ongoing community and city project is serving neighborhoods of all incomes and qualities. The landscape quality of a trail, rather than a park, is not just connecting communities like a bridge might, but integrating their actions, allowing the opportunity for each neighborhood to make public places along its route. A walk along the Santa Fe is like a gallery walk, a sequence of chapters about community life in the city of Dallas, each chapter inhabited by citizens using the natural environment as the creative structure for making public space.

Landscape, then is not the quiet, serene, absence of civic life, but its opposite: the opportunity and celebration of enhanced public space.

Trail systems, powerful bridges, and generous, paved pathways are striking out across the huge expanse of the Trinity Forest. These are not dotted lines on a map, but built structural realities, striding into the overlap between infrastructure, untidy nature, and abandoned industry. 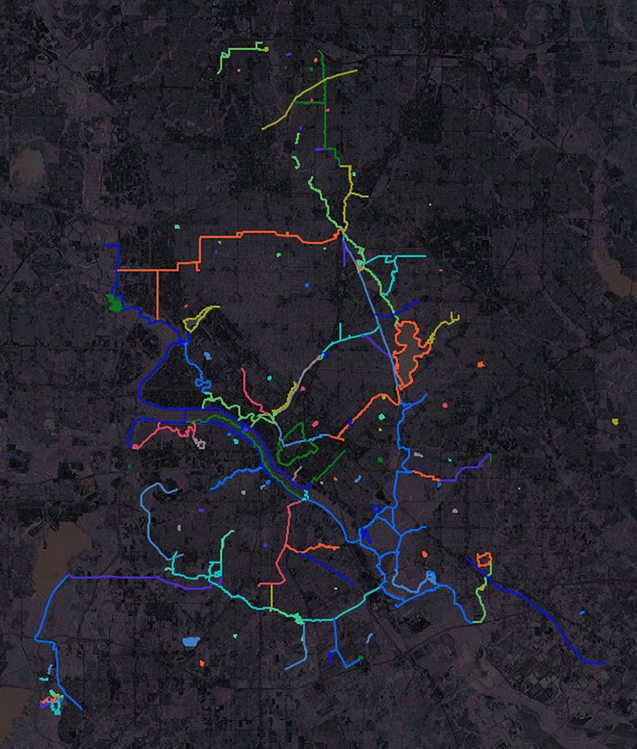 In this reversed map image, the dense lattice of existing and proposed walking trails in Dallas are highlighted. Image credit: City of Dallas

This space of opportunity—a new vision of what urban landscape can be—cannot be seen anywhere better than here. Other cities make urban trails, other cities make river walks, but no other city can find urban forests at the scale of ours, and could integrate so fully the natural to the urban as a single vision for community in a city. Can this extraordinary tapestry of trail threads be seen not just as an opportunity to give city people access to the wilderness experience of the Trinity, its birds, trees, and river, but more powerfully to weave communities along the route of the trail into participation with city placemaking?

In the end, that’s the crux of the great parkway debate. Does Dallas have the courage to see itself as a leader in a vision for a city of communities gathered around the public patterns of its landscape? We have no other city to copy. We have to assess the extraordinary economic empowerment Dallas can get from prioritizing places for public interaction and pause, and value that over traffic statistics. Dallas can be the example for others of the most integrated urban land environment, but we have to recognize that we don’t get that value unless we truly prioritize the embedded connection between tough landscapes and deeply connected communities.

The Dallas Design District and the old Industrial Boulevard are among the toughest, most urban parts of our city. Here, our forgotten land is industrial land, unclaimed, paved, polluted, overgrown with weeds. Yet its in-between character is, in some way, its greatest beauty. As the territory is reclaimed, the difference between forgotten land and abandoned land is unimportant; it’s the continuity and the re-inhabitation of that land as place which makes it into a land-fold park.

The Trinity Strand Trail can be described simply as an extension of Turtle Creek and as a connection to the Trinity River. However, perhaps it is most interesting to re-frame it as a reclaiming of the continuity of our landscape. Here public space is rediscovered both as nature—on those curved trails of original Trinity geography—and as reclaimed industrial territory.

This vision may be a small example of the great opportunity of the city, a chance to weave our network of trails into the integrated vision of our city neighborhood life. It is a dense vision that does not pitch city against nature, but integrates the most urban intensity with the deep patterns of the land.