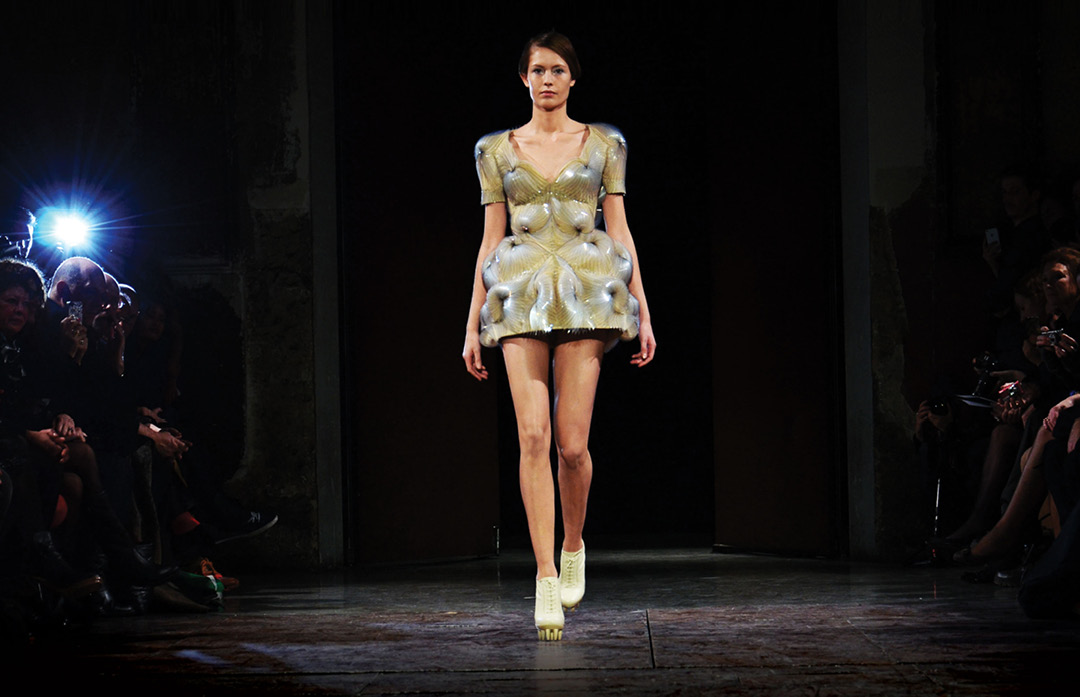 “You think this has nothing to do with you. You go to your closet and you select ... I don't know ... that lumpy blue sweater, for instance, because you're trying to tell the world that you take yourself too seriously to care about what you put on your back. But what you don't know is that that sweater is not just blue … It's not turquoise. It's not lapis. It's actually cerulean. And you're also blithely unaware of the fact that in 2002, Oscar de la Renta did a collection of cerulean gowns. And then I think it was Yves Saint Laurent ... wasn't it who showed cerulean military jackets? … And then cerulean quickly showed up in the collections of eight different designers. And then it filtered down through the department stores and then trickled on down into some tragic Casual Corner where you, no doubt, fished it out of some clearance bin. However, that blue represents millions of dollars and countless jobs and it's sort of comical how you think that you've made a choice that exempts you from the fashion industry when, in fact, you're wearing the sweater that was selected for you by the people in this room from a pile of stuff.”

With these withering words to her new assistant, Miranda Priestly, the Meryl Streep character in “The Devil Wears Prada,” outlined a kind of “food chain” for fashion and its evolving trends. As she sees it, the designers create their one-of-a-kind runway looks, leading to a kind of “trickle down” effect that impacts people at all socio-economic levels and what we all wear. This concept triggers an interesting discussion: Does the same phenomenon exist in architecture?

Just as outlined in “The Devil Wears Prada,” there is a desire on the part of many—whether one acknowledges it or not—to have a wardrobe that aspires to the fashion sensibilities of the “in the know” trend setters and celebrities. Magazines like Us, Glamour, and People have regular features called “Get the Look!” or “The Look for Less,” showing a celebrity’s outfit and then explaining how you can get similar clothes at discounted prices at stores like H&M and Old Navy.

Trickle-down fashion means that a haute couture, one-of-a-kind garment that was worn down the catwalk in Milan or New York might be re-fashioned by the designer into a simpler, more affordable prêt-à-porter (ready-to-wear) piece that can be purchased at Bloomingdale’s or Neiman Marcus. Other designers might take the color and style trends seen on the runway and incorporate them into their even more discounted collections. Less scrupulous designers might go directly to the knock-off. Celebrity wedding dresses are a ubiquitous example; within days of her internationally-televised walk down the aisle at Westminster Abbey, far less artful and far less expensive versions of Kate Middleton’s wedding attire hit the racks at stores worldwide.

One can see a similar phenomenon when it comes to architecture. Throughout history, people have shown a desire to have the elegant houses that they see others have. In the case of the Gilded Age, titans who could afford to build just about any home they wanted looked to the prestigious cultures of the past.

Standard Oil co-founder Henry Flagler had his Florida winter residence designed in Beaux-Arts style to highlight the tenets of Classical and European architecture. To him, this showed that the residence was a place of the highest ideals and aesthetic values—a retreat from the wilds of Florida to a more refined space where art and culture could reign. 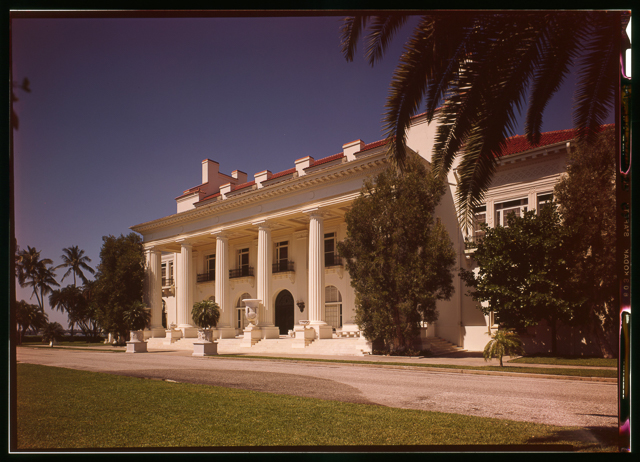 Similarly, Cornelius Vanderbilt had money, but not a noble pedigree; he was determined to outdo the European aristocracy in opulence and ostentation. The Breakers, designed in the early 1890s by Richard Morris Hunt (“the dean of American architecture” at the time), was based on the architectural style of the Italian Renaissance. Serving as Vanderbilt’s summer home in Rhode Island, the 70-room mansion was a tribute to ancient Rome.

Architectural Fashion for the Masses

Not all homeowners can—or could—afford such a significant monument to the architectural fashions of the past or present. At the turn of the last century, Sears, Roebuck & Company, with its dedication to be “A Money Saver for Everyone” and the “Cheapest Supply House on Earth,” worked to revitalize its struggling building materials department by selling the plans and supplies for entire houses through mail order. 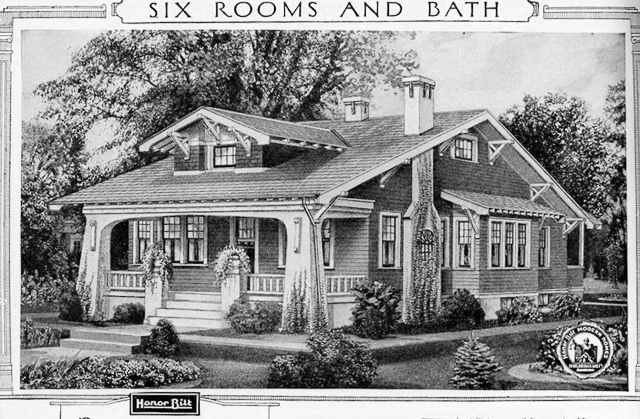 Sears Roebuck & Company's popular mail-order catalog provided plans for "do it yourself" houses as shown in these pages from the 1908 and 1920 catalogs.

As “a mirror of [its time],” Sears created home plans that reflected then-contemporary styles, customs, and modes of living. The first order came in 1908, and by the end of the product’s life cycle in the early 1940s, Sears had offered over 500 different models for sale.

The typical Sears Modern Home kit, with around 25 tons of materials, was shipped by boxcar and then trucked to the home site. Plumbing, electrical, and heating systems could be included at additional cost. The plans reflected the architectural fashions of the times; Arts and Craft, Prairie Style, Bungalows, and Foursquares were prominent styles, although there were also several options that reflected the Victorian designs popular in previous decades. 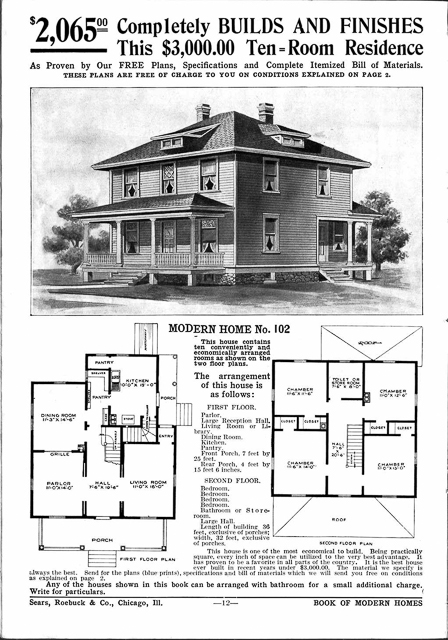 The Modern Home Kit program was scrapped in the early 1940s due to lagging sales caused by the Great Depression of the 1930s and increased demands for lumber for World War II efforts. From 1946 to 1952, it was revived, in a fashion, with the establishment of Homart Homes, built in sections in a factory and sold through limited distribution. The designs were much simpler, almost generic, and did not necessarily reflect any aspiration to a higher architectural style or fashion.

The Mass-Customization of Architecture

Lying in the spectrum somewhere between architect-designed and mass market houses are Frank Lloyd Wright’s Usonian homes. After the Great Depression, Americans reconsidered their everyday needs, including housing. Budgets were limited, and Wright’s clientele, which had previously been elite and wealthier than most, was now firmly rooted in the middle class. The architect saw an opportunity to design homes that were stylish and tasteful—distinctly “New World” and free from previous architectural conventions which had borrowed from European fashions and ancient cultures. The designs were to be practical and functional, but specific enough to the client to meet their family’s individual needs.

Wright saw it as mass-customization rather than mass-production, and he believed that a beautiful house would inspire its residents to live a better life. Unlike Wright’s marquee designs for wealthy clients, these houses were meant to be affordable and the owners were encouraged to become involved in their construction so that they had an additional attachment to their homes. 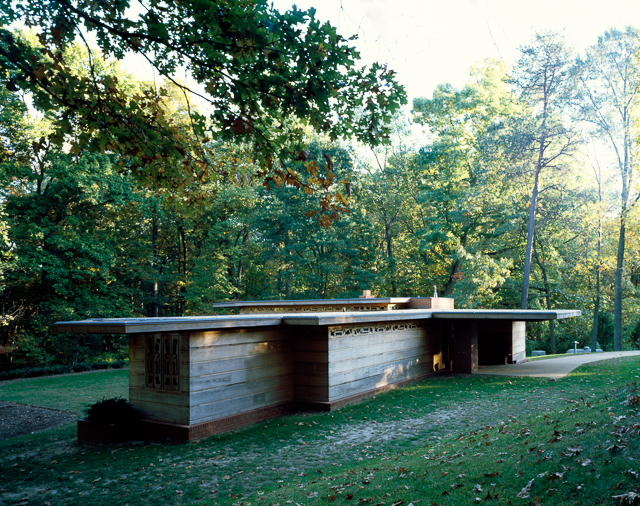 Frank Lloyd Wright wanted his designs to reach "the masses" through his Usonian vision.

Signature features of these designs in “organic architecture” included strong horizontal lines, the use of native materials, and a grid-oriented plan. They had no formal dining rooms or living areas; the Usonian style was intended to reflect the more casual home life that Americans were pursuing.

After designing Usonian homes for clients across the United States, perhaps inspired by programs like the sears Model Home Kits, Wright saw an opportunity for a factory that made Usonian “parts.” These elements could be adjusted for a certain client’s needs, broadening the opportunity for mass-customization. However, the factory never became a reality, and, as labor and material costs increased, the Usonian concept became less feasible. Wright returned to large-scale commissions, and it was left to a group of his apprentices to design and build an entire community of 47 Usonian houses in the town of Mount Pleasant, NY, in the late 1940s.

Today’s prospective homeowners can purchase stock home plans that offer generically bland designs for oversized homes. There are a few options that still fit into this idea of haute couture architecture adapted for the mass market, however.

If looking for a more traditional style, they might invest in a plan offered by the magazine Southern Living. With choices ranging from “country house plans, country cottages, luxury home plans, and more,” the plans are designed by architects and reflect Southern home design fashions such as wrap-around porches, seaside architecture, and the incorporation of subtle Classical details. In keeping with Wright’s ideas, plans are customizable … for an additional fee, of course.

Those looking for homes in the Modernist fashion might turn to Hometta. Founded by real estate developer and builder Mark Johnson in 2009, Hometta is a collective of designers, architects, builders, writers, and editors who are striving to change the model of mass market residential architecture. The homes are an architectural alternative to more generic builder-designed homes while remaining accessible and affordable. The emphasis, as stated by Hometta’s promotional materials, is on “great design.” Developed by award-winning, renowned architecture studios, the homes are all under 2,500 square feet and include sustainable materials and design methods. Plans average $2,000, and are also customizable—either by working with a local architect or builder or hiring the original architect to make adjustments. 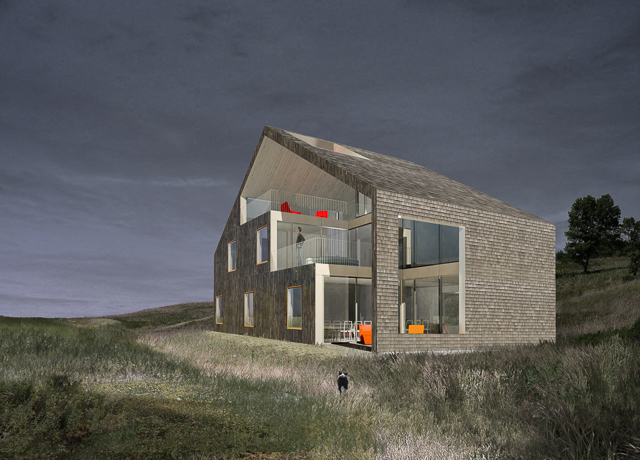 Hometta follows in the footsteps of Usonian and Sears models, providing design-savvy homes to a populace that might not otherwise be able to afford them.

As the legendary designer Coco Chanel said, “Fashion is architecture. It is a matter of proportions.” It is little wonder then that there seems to be a permeability between the world of architects and fashion designers. Tom Ford; Bill Gaytten, the creative director of fashion house John Galliano; Pierre Balmain; and Gianfranco Ferré, the one-time stylistic director of Christian Dior, all studied architecture for varying lengths of time before embarking upon their fashion careers. Fashion designers from around the world have noted their influence by a variety of architectural sources, from Rei Kawakubo of Comme des Garcons citing Le Corbusier as a key influence to Rosie Assoulin pointing out that her fall/winter 2015 collection was influenced by Italian architect Carlo Scarpa’s Brion Cemetery.

Additionally, several notable architects have applied their skills to fashion design, especially accessories. For example, Frank Gehry, FAIA designed a handbag for Louis Vuitton; Zaha Hadid, Hon. FAIA designed shoes for Melissa, Lacoste, and NOVA. For those of us not looking for a pair of shoes priced in the thousands, Hadid also designed a version of the “jelly shoe.” No, not the versions you can buy at your neighborhood Walmart, but a limited edition, priced at around $250 and presented in “a limited-edition box.” 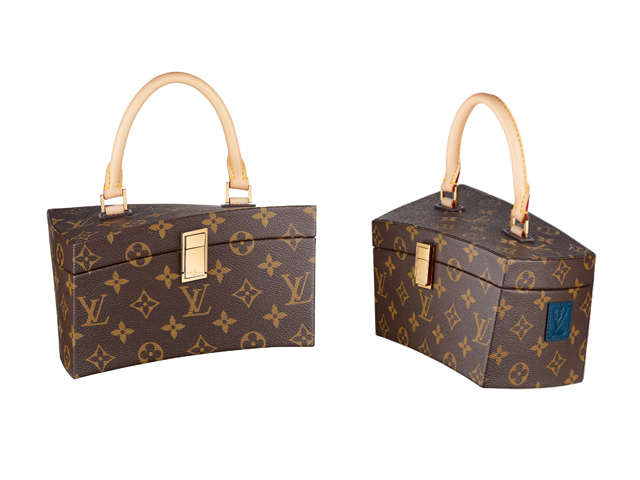 The architects who have ventured into the world of fashion design have not yet seen a need to create clothing for a larger mass market; their work is notably more expensive than the everyday consumer could afford. Yes, noted Postmodernist architect Michael Graves, FAIA designed watches and affordable products for Target, and Philippe Starck created a line of “multifunctional garments” with Scottish cashmere company Ballantyne, but Old Navy and Macy’s have yet to offer a clothing line designed by any of the world’s great architects.

The Blurring Between Architecture and Fashion

Coco Chanel was right that architecture and fashion are remarkably similar. While architecture is larger in scale, and, one should probably argue, a far more significant influence on the way we live, both disciplines deal with structure, form, and balance.

With ever-evolving technology, perhaps even more is shared between the two professions. Both are already exploring the artistic and practical impacts of 3-D printing on their creations. Material costs and renewable resources are increasingly of concern. One wonders what is next. Frank Lloyd Wright designed the furniture and accessories for his Usonian homes. Might he have designed the inhabitants’ clothes as well?

In creative disciplines such as architecture and fashion, where DOES one draw the line? After all, today’s haute couture could be tomorrow’s prêt-à-porter.