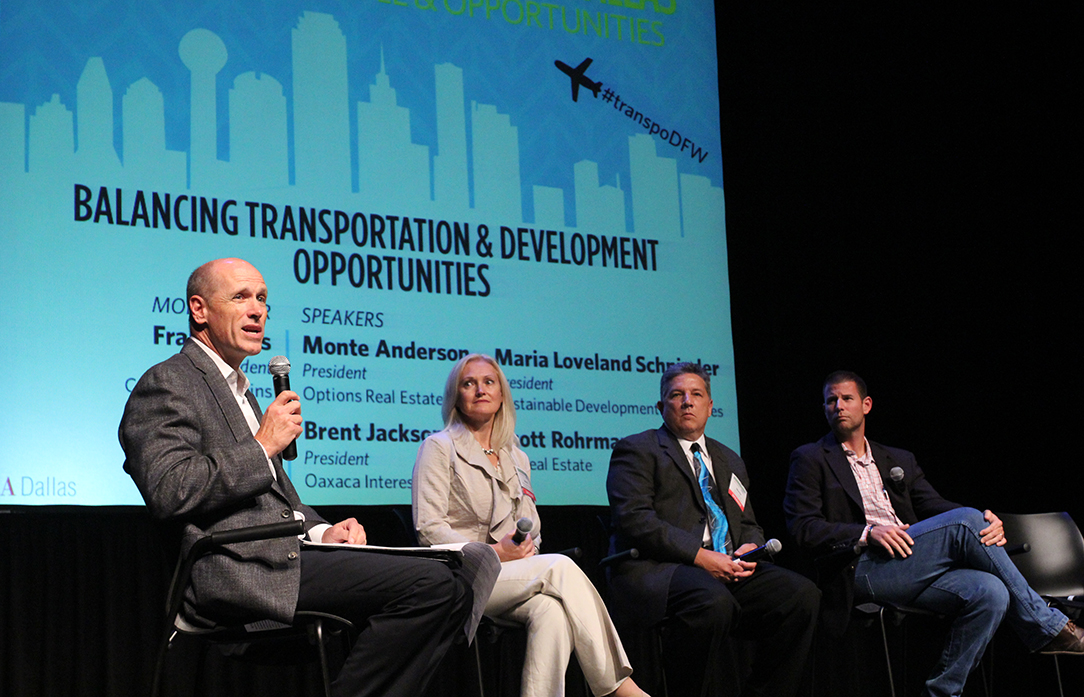 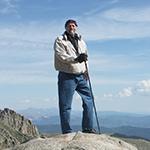 Who’s minding the city? The venerable Stanley Marcus, were he alive today, would likely be asking this very question in a sequel to his much-loved book on retailing principles by a similar name. He commanded his managers to “lift the hood and check for leaks” before opening their stores each day. By Marcus’ standards, when small aberrations were promptly addressed, sales went well—and events came off with few, if any, glitches.

Today, Dr. Gail Thomas of the Trinity Trust and founder of the Dallas Institute of Humanities and Culture asks us again what the Dallas that’s surrounding Stanley’s stores wants to be.

But how do we navigate the challenges confronting Dr. Thomas and the rest of us? And how do we accomplish the small creative improvements that make huge differences in people’s lives?

In 2014, AIA Dallas and the Greater Dallas Planning Council (GDPC) organized a two-day event—Choices for a 21st Century Dallas: Connecting People and Opportunities. It focused on the long-range future for Dallas and the surrounding region. This summit featured a variety of perspectives and explored what investments may be needed to achieve the greatness we collectively envision. AIA Dallas and GDPC expressed concern that the conversations seen in the press focus on isolated projects and that the solutions to specific traffic needs are not comprehensive enough. The summit explored ways traffic infrastructure decisions impact the social, economic, and environmental future of Dallas and North Texas.

Transportation planning —in the context of both internal and external costs and benefits—can run a similar qualitative course in shaping urban life for decades to come. It happens both regionally and citywide, and sometimes in just a single corridor. The job of implementing transportation infrastructure can be adversely affected by skipping over details, just as in a retail operation. As Mr. Marcus would say, cheap or not well thought-through is never the best approach.

Summit keynote Jeff Tumlin of Nelson/Nygaard views transportation as an investment decision that results in real estate and social responses. A transportation system, he says, is intended to support larger goals in addition to transportation.

The Next Gen panel, moderated by Scott Griggs, got a boost when he said, “… A sign Dallas is maturing is that there’s more than one hot spot. City life is coming back.” Architect Roddrick West of Oak Cliff, one Next Gen panelist, suggested that IH-35 led to urban sprawl with the result being loss of tax base, schools, and culture—as well as (city) life after 5:30 p.m. “Today’s generation wants to create density and make it easier to be downtown” he said, warning that a Trinity Toll Road wasn’t appropriate for South Dallas. “The solution is to fix the core.” 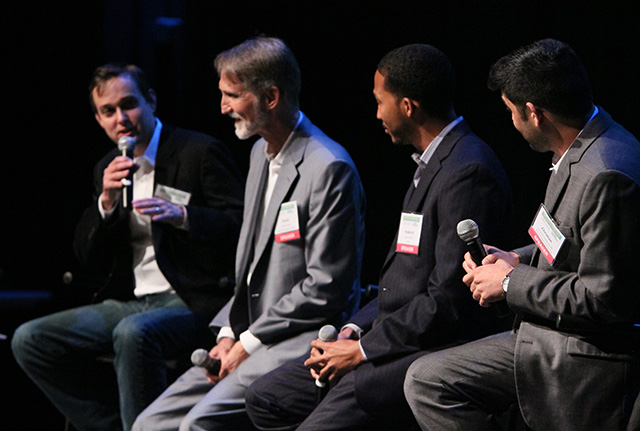 West said he loves Deep Ellum because it gets away from Dallas stereotypes and is very accessible. He mentioned that the recent move by Uplift Academy to Deep Ellum creates a node for South Dallas education and urged the audience to count education facilities as nodes of communities.

Next Gen panelist David Marquis worries about mobility limitations. He believes that the lack of mobility choices remains a social justice issue. “When people can live in Deep Ellum, it has potential. It comes down to water, mobility, and housing. And how do we fund all this?”

While the automobile remains the primary form of transportation for most individuals, the need for safely accommodating the most basic transportation modes, including bike and pedestrian facilities, is only growing stronger.

So what principles apply, and how do we navigate the process of funding and implementing active transportation infrastructure? How do innovative bikeway and pedestrian facilities get properly built, managed, and maintained?

At the federal level, most gas taxes sent back to states can fund walking and bicycling facilities. A cornerstone is that agencies must give equal consideration to all modes, and include public involvement from the earliest stages when planning for transportation infrastructure projects.

Here in the North Texas region, progress toward these principles began gradually shifting more than a decade ago. Morris was given broadened responsibilities with the adoption of this new congressional funding mechanism in what’s now called MAP-21: Moving Ahead for Progress in the 21st Century. The bike and pedestrian components are called the Transportation Alternatives Program, which is also administered through NCTCOG.

Within North Central Texas, the region’s long-range regional transportation plan includes a network of more than 1,600 miles of hike/bike trails called the “Veloweb.” This plan, part of the region’s overall mobility plan, is also updated every five years, and cities within the region apply for funding to build bikeway and pedestrian infrastructure that’s consistent with the long-range vision. (See more at www.nctcog.org/trans/sustdev/bikeped/mtpactive/.)

Through a slow and methodical process, NCTCOG has created an entire team of active transportation planners who manage a sustainable development program that is succeeding at leveraging public improvements with mixed-use developments in Dallas and elsewhere around the region. Hi Line Drive in the Dallas Design District connects the Trinity Strand Trail to DART LRT and TRE stations east of IH35, thanks to this program.

Courtesy of Friends of the Trinity Strand Trail

Another example of progress in mobility alternatives is the 2011 Dallas Bike Plan, which identifies an on-street bikeway network with connections to the park department’s citywide trail network. The goal is to eventually connect more than a thousand bikeable miles throughout Dallas.

For the program to work, several principles need to be considered: 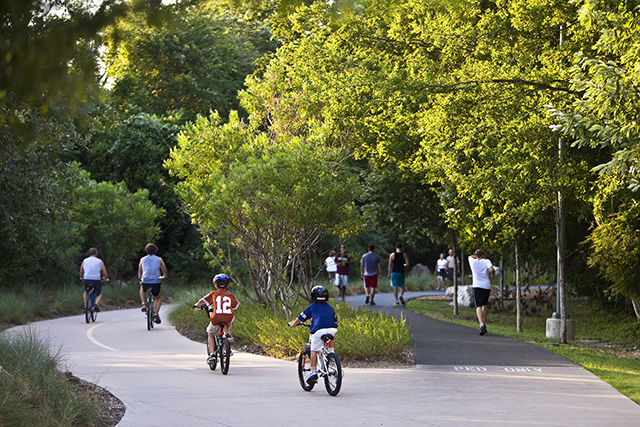 The summit revealed a need for more integration and interconnectivity as guiding principles for transportation alternatives.

What if a more grass roots planning effort emerges within area professional organizations and among neighborhood leaders? What if thought leaders reached out to motivate and teach younger generations—as young architect West implores us to do? What if the next generation of city planners, architects, engineers, and stakeholders chose to transform the Dallas of the future in a big way?

Today’s workforce is looking for transportation options and many would welcome opportunities to arrive at work on foot or by bicycle. Numerous studies show that, in some areas, this strategy can save families as much as $9,000 per year. The average American household spends an estimated 16% of its budget on transportation—more than on either food or health care. Low-income families spend as much as 55% of their household budgets on transportation.

What if the Dallas City Council pressed the city manager and his staff to expand creation of “complete streets” and trails that connect directly to DART stations? Conference attendees questioned why we’re not leveraging more mixed-use centers near inner ring DART stations to be catalysts for creation of “complete streets.” And what if we construct bike and trail plans wherever neighborhoods or districts asked for them? That then begs the question: Would regional highway planners realize we actually don't need a toll road? If that were to occur, the river's free to run or ride!

Just ask any real estate professionals. They’ll likely tell you that bikeways, good sidewalks, and trails are more popular than golf courses. Costly? Yes. Great return on investment? Just look around at the neighborhoods that are near them. As Mr. Marcus would say, cheap is never the best approach—to which I’d add … also true for active transportation infrastructure. These kinds of improvements can be very worthwhile investments.

Bud Melton is a vice president with Bowman-Melton Associates, Inc.