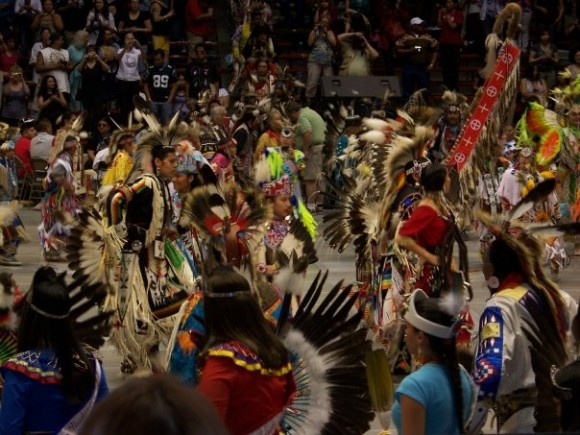 A member of the Women in Architecture group shares her networking experiences amid the intense color and texture of the 2014 Gathering of Nations -- America's largest annual powwow.

In April, I attended the largest powwow in the United States -- the 2014 Gathering of Nations, held annually in Albuquerque. It was an opportunity to visit with friends from all over the country, including a young woman who is also an architect and owner of a firm. We shared our experiences working with consultants, deadlines, and men.

Both my friend and I are Native American women. She started her firm about two years ago, and I am very proud of her, since there are very few Native American female architects in the USA. When in graduate school, I often wondered where all the Native American architects worked; the first I found were men, which was not surprising for the time. With further research, I was thrilled to locate the American Indian Council of Architects and Engineers (AICAE), and I remain so glad the group exists to lend strength and support to its members. Membership is not limited to A & E; there are interior designers, landscape architects, professors, and construction professionals as well. Each year, we convene in a different location across the country. Friendships and mentoring opportunities abound!

My friend who attended the 2014 powwow is an example of the kind of relationships we can build in Women in Architecture. She and I became acquainted several years ago through AICAE while she was a student. We have learned much about life and architecture together over the years. The mentoring benefits extend both ways. Reach out and help to inspire curiosity about architecture in our youth. Your practice will be made richer by the experience.