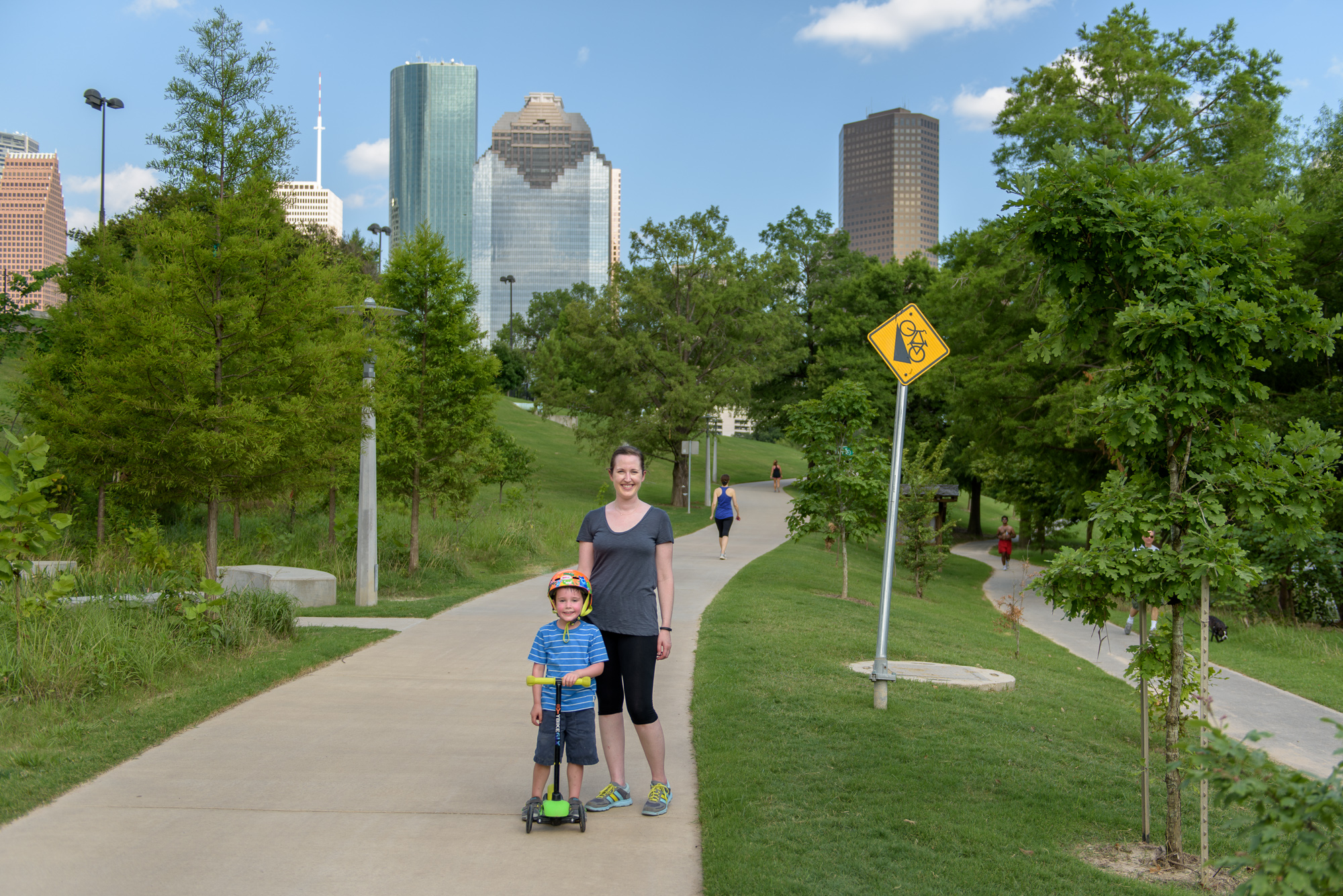 Karoline and I met at AIA Houston's Gala several months ago. During our table side discussion I shared how impressed we were in Dallas that Houston had the political will to transform the neglected bayou into a great linear urban park.

Karoline shared her story of living on the bayou prior to the restoration of the waterway and how valuable an asset the Buffalo Bayou has become to her family and the community since the wetlands have been restored and park amenities have been built.

I feel certain that her story can be our story if we focus first on the Trinity Park and allow the park to inform the design of the Parkway.

Thank you, Karoline, for sharing your Buffalo Bayou story with us.

Reclaiming the Park from Allen Parkway

The winding drive along Allen Parkway that leads into the heart of the nation’s fourth largest city offers drivers a view of green spaces surrounding Buffalo Bayou in the foreground of the downtown Houston skyline. The experience has always been a pleasant one from the car, and a preferred route for those who work downtown. In person however, Buffalo Bayou Park became a neglected space, unfriendly to pedestrians and a missed opportunity for a large city that had become more associated with cement and eight lane highways than beautiful outdoor areas.

My husband and I moved to an area within walking distance from Buffalo Bayou Park in 2007.  Although close to the large outdoor space along the bayou, going on runs, walks, or bike rides was not as pleasant of an experience as we had anticipated.  The bridges in the area were shared between pedestrian and car, with pedestrians being forced along a narrow sidewalk inches away from traffic.  Pathways within the park were uneven, and unsafe when not in view from Memorial Drive or Allen Parkway.  As the spaces closest to the Bayou had become overgrown with vegetation, and less traveled by park-goers, they became a destination for the homeless and were therefore even less inviting for the general public.

In 2010 my family had a new reason to connect with the outdoors, our son was born in October, and we loved taking him outside on long stroller rides.  It was during that year a beautiful pedestrian bridge was built across the bayou to connect the surrounding residential areas and provide views of the winding water and downtown skyline.  This was the first of many changes that developed over the next several years.  The bayou itself was addressed as invasive vegetation was removed and its shape was altered to bring it back to its natural, slower moving current.  Large and small curving pathways were built throughout the park with the addition of several more bridges similar in design to the first.  Hundreds of trees were planted, as well as native grasses and wild flowers that cover the slopping hills leading to the bayou.  Taking our son for a walk or bike ride now is remarkably different than it was five years ago.  Not only can we choose from multiple paths on each visit, but there is the addition of shaded picnic benches, look out areas, water features, a new dog park and event spaces. A great success of the renovated park is the careful attention given to its overarching plan. Unique small destinations are visibly connected by a larger, unified design such as the light posts that dot the paths and an array of outdoor structures with a common motif.

The next step for Buffalo Bayou Park will further rebalance the experience from driver to pedestrian.  Allen Parkway will be modified to provide new pedestrian crossways and parallel parking in place of a current traffic lane.  Similar to the slower moving waters in the bayou, the speed limit for cars will be reduced to support the changes. Where once Houston was becoming known for its vast highways and lack of green spaces, it has recently turned a corner by providing a large scale park that will be enjoyed for decades to come and define the city as one that connects its citizens to its surrounding natural resources.