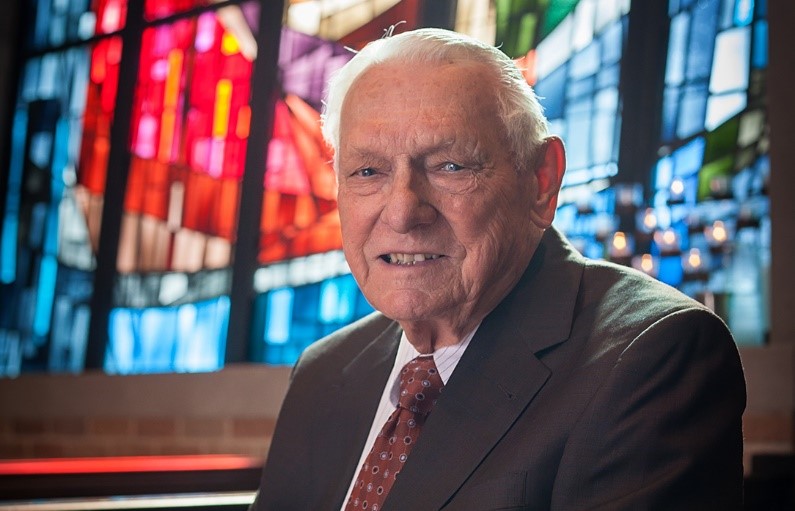 It is with sadness that we share with you the passing of James Arthur (Jim) Clutts, FAIA on May 28, 2021. The recipient of the 2014 AIA Dallas Lifetime Achievement Award, James A. Clutts, FAIA, was an architect with a vast and impressive career. Jim’s contributions to the built environment included a notable range of civic, educational, church and cultural projects both in Dallas and across Texas. Among his many buildings are Saint Michael And All Angels Episcopal Church, The Hockaday School, Yvonne A. Ewell Townview Center and many building projects at the University of North Texas in Denton. He was also a former president of both the Texas Society of Architects and AIA Dallas; his leadership in the profession left a significant mark.

Jim graduated with a Bachelor of Architecture from The University of Texas in Austin by completing the 5 year professional degree program in 3 calendar years. Prior to that, he completed a Bachelor of Structural Engineering from The University of Kentucky. After interning at a Fort Worth firm, he went to work with Harwood K. Smith Architects, now known as HKS. He was a prolific young designer and partner at HKS before he left to start his own firm.  He invited Howard Parker, FAIA to join him thus founding Clutts and Parker (1961-1973). From 1973-75 the firm was known as Iconoplex. Later, the firm merged with another Dallas architectural partnership - Terrell Harper and Harris Kemp to form Harper Kemp Clutts and Parker (1975-1995).  The firm became known as HKCP.  As ownership transitioned from Clutts to younger partners, the resulting firm was known as HKCP/Jennings Hackler. Jim was president of AIA Dallas in 1974, TSA director from Dallas from 1978-1980, was elevated to the College of Fellows in 1981, and received the AIA Dallas President's Medal in 1982. He became TSA president in 1987, AIA National director from Texas 1982-1984, and received the Texas Society of Architects Medal for Lifetime Achievement in Honor of Llewellyn W. Pitts, FAIA in 1990.

An anecdote we found from his son’s Facebook page honoring his father states, “In 1991, Dad was overwhelmed with pride and gratitude as his entire family hid in the wings at the dinner where, to his surprise, he was presented with the Lifetime Award. Self-deprecating as ever, he mentioned that with our unusual family name the headline in the Morning News would probably read ‘Clutts gets Pitts.’”

His daughter, Mary Alva Clutts, AIA, stated that Jim died peacefully. He appreciated the kindness, friendship, and fellowship of so many people over a lifetime of 95+ years.

We are grateful to have known him and to benefit from his architectural legacy in this city. His profile was featured in Columns in celebration and recognition of receiving the AIA Dallas Lifetime Achievement Award.