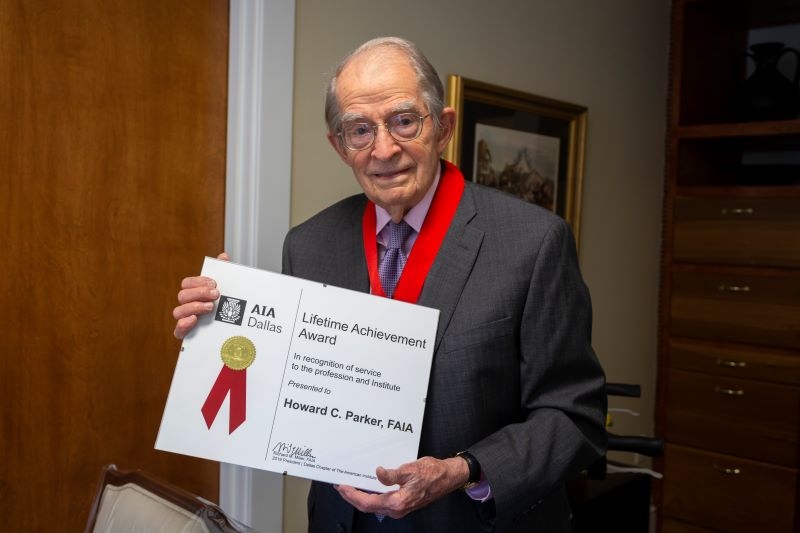 AIA Dallas is saddened to share the passing of Howard Parker, FAIA on September 9, 2022.

Howard Parker, FAIA attended The University of Texas and was married in September 1951. After graduating in January 1953, he served in Korea for 16 months. When he came home from Korea, he found that Robert Buffler, a professor of his in the School of Architecture, had arranged a job interview for him with Harwood K. Smith and Associates. He went to work the day after he introduced himself in January 1955. He was the 7th person on Harwood’s payroll. Jim Clutts, FAIA was the designer for the firm. In 1963, Jim asked Howard to join him in a partnership to form Clutts and Parker Architects. Together, they developed a portfolio of educational, religious, commercial, and industrial buildings to serve their client’s needs. In 1974, Clutts and Parker merged their firm with the firm of Harper and Kemp to become Harper Kemp Clutts and Parker (HKCP). Both Jim and Howard retired in 1996.

Howard served as President of the Dallas Chapter of the American Institute of Architects in 1971, the year of the Town Lake Environmental Awareness Study; and served on the Board of the Texas Society of Architects in 1973. In 1975, he was advanced to fellowship in The American Institute of Architects and received an Honor Award from AIA Dallas for Emeritus of the Year in 2001. He was awarded AIA Dallas’ most significant member award, the Lifetime Achievement Award, in 2019.

Howard remained active in the Chapter until very recently through his involvement in the Fellows’ network and the Communities By Design Committee. He was a dear friend and mentor, and we will miss him dearly!