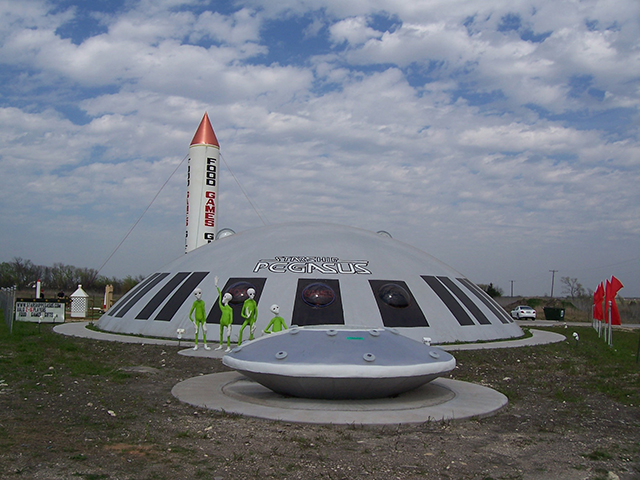 Completed in 2005, this eye-catching monolithic dome, named “Starship Pegasus,” is on the corner of I-35 and Highway 34 in Italy, TX. It was recently sold to McDonald’s.
Credit: Monolithic Dome Institute

Driving south on I-35E from Dallas, just before the exit for Italy on the left-hand side of the highway, drivers get a glimpse of a cheerful caterpillar made out of a series of 76-foot interconnected domes. Its glow-in-the-dark cowboy boots and smile conceal a more serious purpose.

Driving south on I-35E from Dallas, just before the exit for Italy on the left-hand side of the highway, drivers get a glimpse of a cheerful caterpillar made out of a series of 76-foot interconnected domes. Its glow-in-the-dark cowboy boots and smile conceal a more serious purpose. The 14,000-square-foot factory space marks the edge of the headquarters of Monolithic, a family of companies and organizations dedicated to the introduction and construction of the monolithic dome, a structure utilized around the world as an energy-efficient and disaster-proof building solution.

David South, current president of Monolithic, and his brother Barry were granted a patent for the monolithic dome in 1979. Their design includes layers of insulating polyurethane foam, structural rebar, and a special spray concrete mix. The domes meet FEMA standards for providing “near-absolute protection” and have a documented history of withstanding tornadoes, hurricanes, earthquakes, and wildfires.

The domes lend themselves to a wide variety of uses by being employed as homes (luxury included), churches, schools, sports venues, and cultural facilities. Tupelo, MS, has ordered two domes to be used as safe rooms for their community—each holding 1,000 citizens in case of crisis and used as community centers at other times. The dome in Catoosa, OK, is a school cafeteria that can become a safe shelter for students and residents during tornadoes.

Their use extends far beyond the United States; several non-profit organizations have been created to encourage the construction of these resilient buildings in impoverished communities. Domes of the World, also based in Italy, TX, has supported the construction of monolithic domes in Belize, Nairobi, Haiti, and Indonesia. 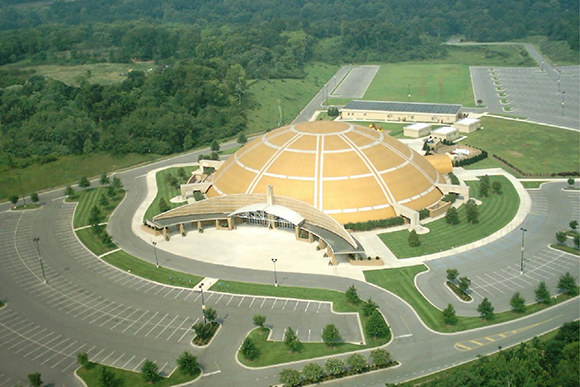 One domed facility in Alabama survived an F4 tornado, a half-mile wide, which hit all six domes. The insurance company valued the entire property at $51 million. The damage was only around $250,000 and entirely cosmetic.

So the next time you drive by Bruco the Italian Caterpillar, remember the quirky little “insect’s” role in resilience.

Greg Brown is program director of the Dallas Center for Architecture.

What goes into the construction of a dome? Watch and see.