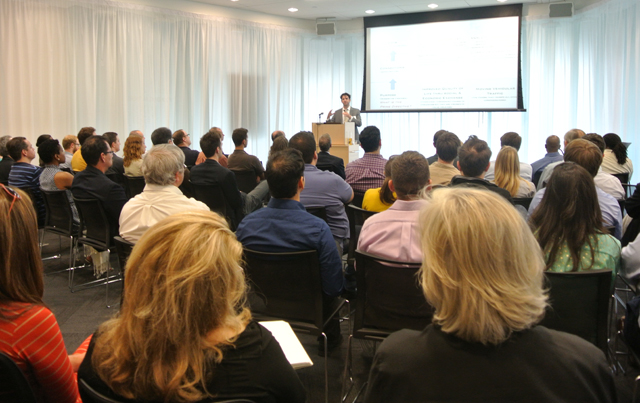 Highway Tear-outs: The Next Frontier

Urban designer Patrick Kennedy recently came to the DCFA to discuss the merits and benefits of a radical idea – tearing down an often used urban freeway in favor of a low speed boulevard.

Kennedy has been presenting this idea to stakeholders affected by the elevated freeway that divides the Central Business District from Deep Ellum and East Dallas.  The highway, officially I-345, connects 75 with 45, and TxDot has reported that it is in need of significant, costly repair.  In drops Kennedy to say, “well, here’s an idea.”

But Kennedy has not simply presented an idea with a cursory review of the actual impact.  He presented relevant research by his team that examined not only existing land values and potential land values, but also intersections per mile, length of lanes per capita per city, transportation costs per gross domestic product, vehicles per day, pedestrians per day on boulevards…  You get the point.  The list was exhausting, but all was necessary to help build a case for removal of a freeway.

Discussion touched on broad ideas, such as viewing cities as complex, biological living systems; the purpose of cities; and the interconnections cities develop.  We discussed the Myth of Bilbao. Did Gehry’s museum really ‘turn’ the city around?  Or did infrastructure improvements set the stage for Gehry?

To help leverage the drastic notion, Kennedy presented a few other areas around the world where freeway teardowns have improved the city.  One notable case is San Francisco’s Embarcadero Freeway area.  It was ‘naturally’ torn down, but civic leaders made a conscious decision to redevelop it differently.  Cheonggyecheon in Seoul, South Korea; West Side Highway in New York; Harbor West in Portland were a few similar ‘teardown’ examples.

In terms of values, Kennedy claims that the existing 245 acres adjacent to I-345 has only $20M in improvements, and generates only $3M in city tax revenue.  According to his group, if an at-grade boulevard were developed in lieu of rebuilding the freeway, the land value could increase to $4B with $110M in city tax revenue after 25 years.

Are developers and landowners interested in his proposal?  He says that he has experienced a range of reactions from enthusiasm to resistance.  Some landowners have sunk costs into the area expecting the freeway to remain, and for it to be above grade.

Judging by the audience that attended, many were very interested.

For more information, go to www.anewdallas.com.