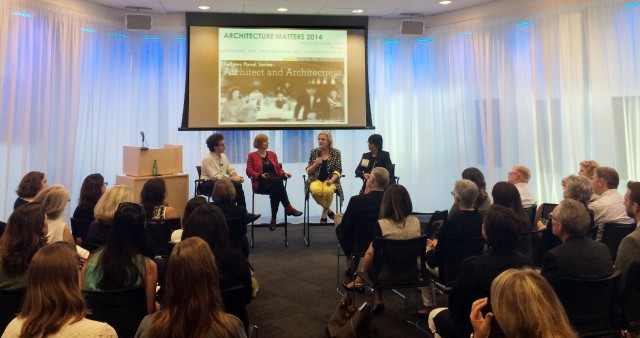 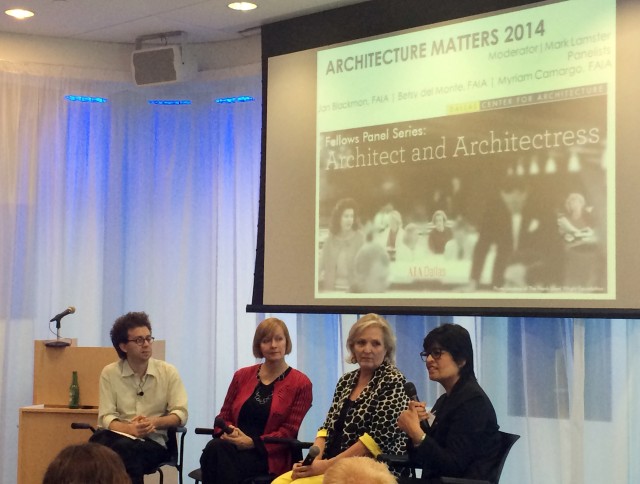 When women have made such strides in other professional fields, why are the numbers still so grim in architecture? That was the topic of the latest AIA Dallas/Dallas Center for Architecture/Dillon Center Fellows Panel: Architect and Architectress.

I know, I know. You're offended by the term "architectress."  And if you're not, you probably should be. It comes from a 1951 series published in the Journal of the American Institute of Architects, full of all the sexist stereotypes and condescension you'd expect from the Mad Men era. But outside of semantics, just how far have we come since then? If you look at the numbers, not very far. In 1951, women made up 5% of the AIA. In six decades, that number has only risen to 19 percent. Only 9 of the Dallas chapter's 130 Fellows are women.

Mark Lamster, UTA professor and Dallas Morning News architecture critic, moderated a panel discussion by three of those women Fellows -- Jan Blackmon, Betsy del Monte and Myriam Camargo. It was good to see a large number of men in attendance. As Mark said, "the lack of status of women in architecture is not a female problem; it's an everybody problem." And as the panel noted several times, the issues holding back women in our field are increasingly unacceptable to modern men as well:

- low pay
- lack of work-life balance
- a culture of long hours and all-nighters.

Such a culture is not sustainable for our profession, Jan said. Betsy maybe put it more bluntly: "The coming generation doesn't want to put up with all the crap we did." Because of that, things are changing, though not as fast as they should.

Another problem for both women and the profession: the "starchitect" system. Women have long excelled as collaborators, the panelists said, but the system doesn't reward that skill. Even the Fellowship process discourages the idea that many people contribute to successful projects. Instead, you're supposed to pretend you did everything alone. Women have historically been more willing to let others take the credit. "Women have been contributing to architecture all along," Myriam said. "You just didn't know it."

Well, it's about time that changed.