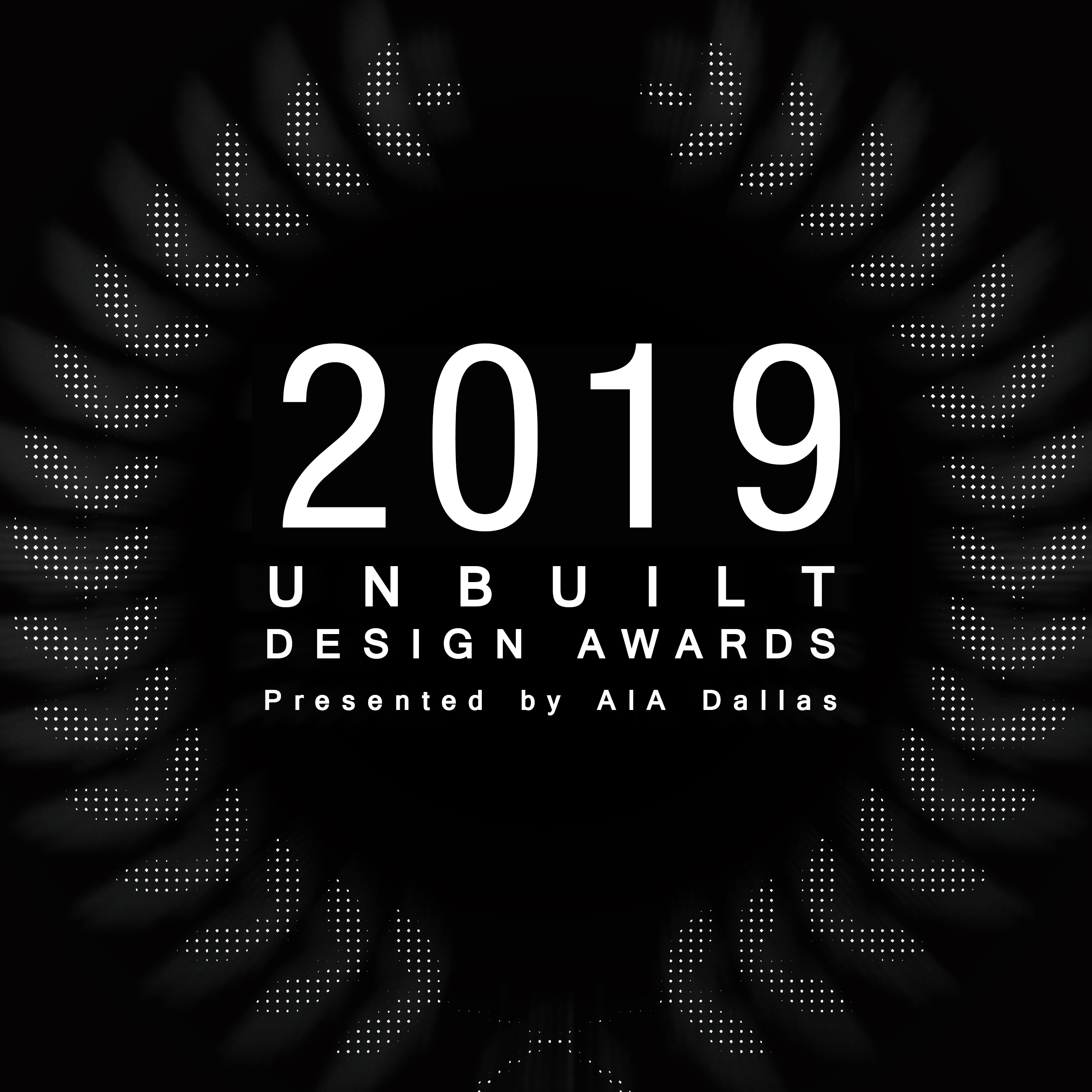 The 2019 reception also included additional honors, including the Critic’s Choice Award as selected by Mark Lamster of The Dallas Morning News at the University of Texas at Arlington, and a People’s Choice Award that was voted on by event attendees.

“The Unbuilt Design Awards offer a unique opportunity to look behind the scenes of projects in the works in Dallas and around the world,” said Ricardo Munoz, AIA, of Page, 2019 AIA Dallas Design Awards Committee Chair. “The presentation of these projects, designed by Dallas architects, helps create a valuable conversation about how architecture can and should play a vital role in the shaping of spaces and places for communities. By sharing our work with the visiting jury, we have the opportunity to communicate the wonderful solutions and research being developed here with others in locations around the world.”

“This year, we held our second Student Design Awards and were very impressed by the quality and thoughtfulness in the student work. The winning projects in this category once again remind us of the possibilities and aspirations architecture can achieve. We are excited at the opportunity this program affords in bridging the profession with academia,” said Munoz. 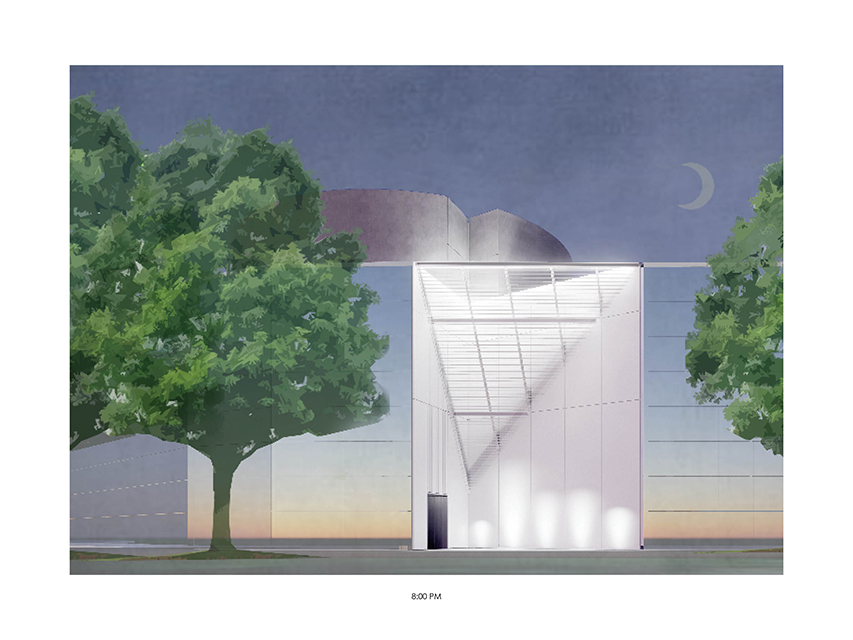 Second Shadow, Entos Design (Dallas, TX) – The project consists of an intervention to the building entry of an existing corporate building, offering a second chance to create a meaningful entry experience in this building. The new solution is to apply fenestration to enhance the building's entrance. The triangular shape is composed of prefabricated louver modules that will give pedestrians a sense of lightness, similar to being under a tree canopy. The louvers will slice light and will cast shadows over the building. The beauty of shadows is that they last only a second in time. Though this entrance may seem simple, as you engage, it reveals a multidimensional experience. 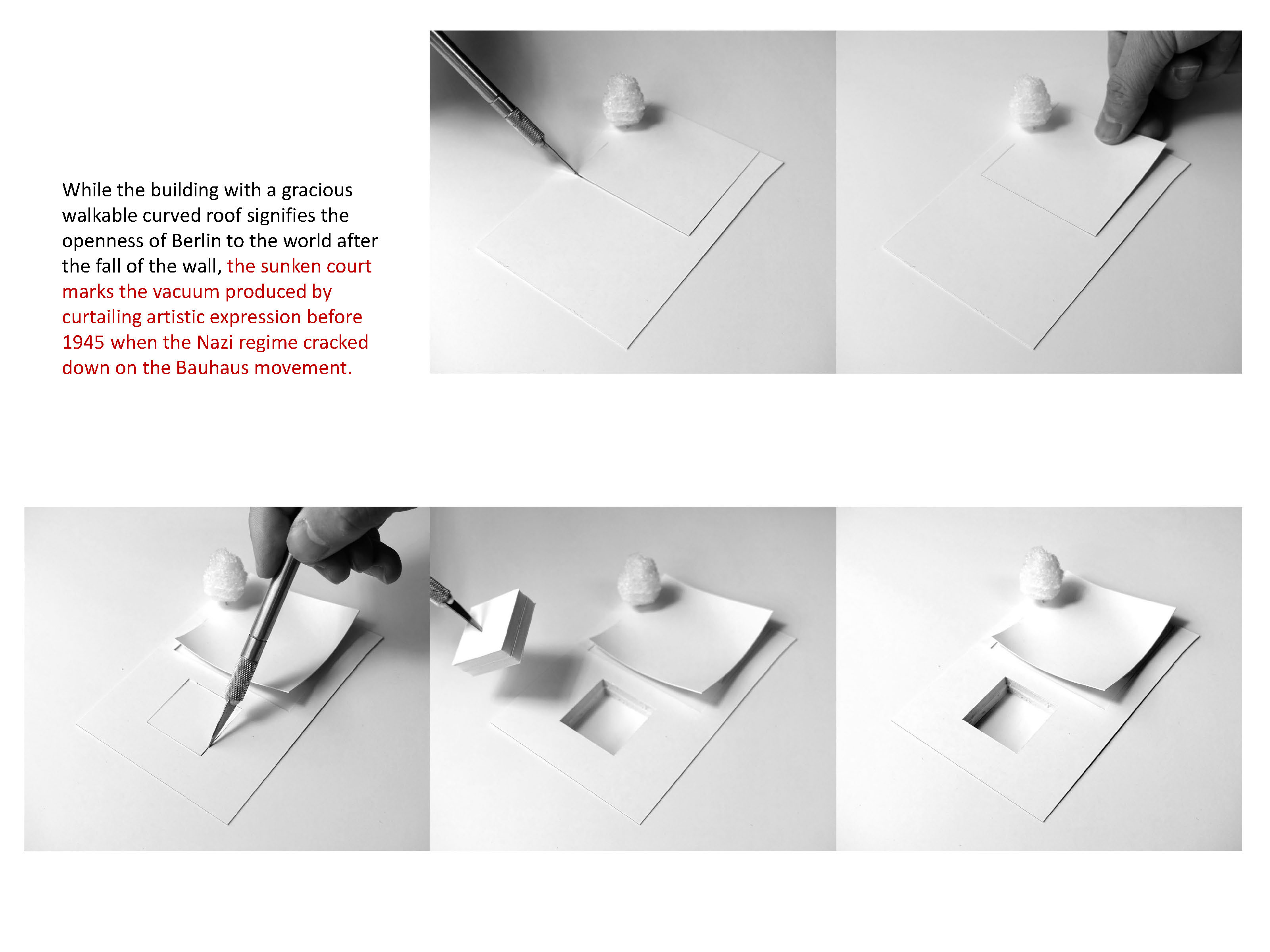 Museum in Berlin, FTA Design Studio, Inc. (Berlin, Germany) – The Museum of the 20th century is viewed as the missing link of the Kulturforum, the cultural district of Berlin. Located in between the Neue Nationalgalerie (Mies van der Rohe) and the Berlin Philharmonic (Hans Scharoun), the Museum of the 20th Century establishes a formal linkage between two masterpieces of divergent aesthetics. The proposal extends the existing tilted plaza on the west side by creating a plane that emerges from grade and rises gently towards Potsdamer Street offering a gracious walkable roof. A sunken court that separates art produced before 1945 and art after 1945 is positioned between the curved roof and the Neue Nationalgalerie. While the building with the curved roof signifies the openness of Berlin to the world after the fall of the wall, the sunken court represents the vacuum produced by curtailing artistic expression before 1945 when the Nazi regime cracked down on the Bauhaus movement. 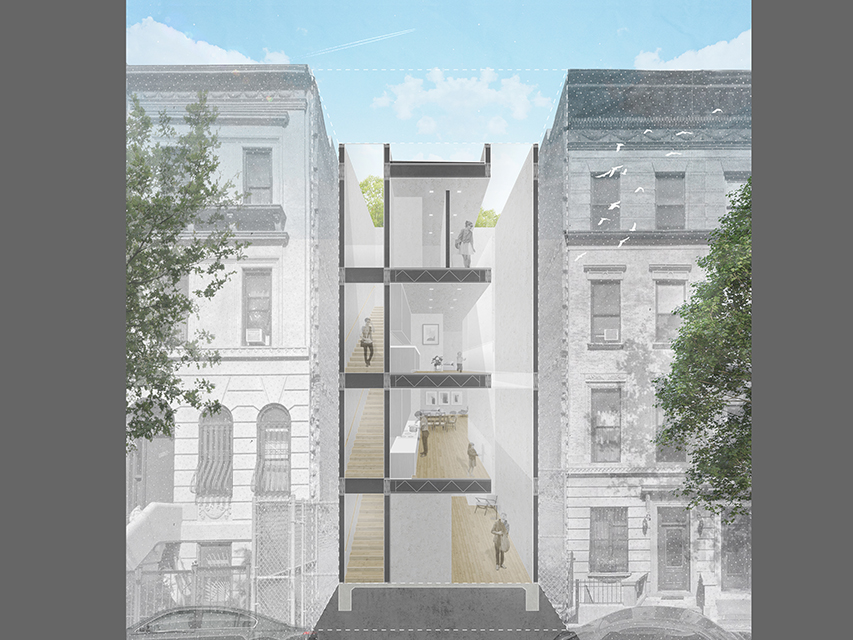 Urban Slot, FAR + DANG (New York, NY) – The infill project strategically considers every plane of the building, both vertically and horizontally, in creating space and addressing the need to connect to the immediate context and the public realm. The layering of the building’s exterior materials, with varying degrees of porosity, addresses the public street and the changing degree of privacy throughout the day. Operable panels are strategically placed in front of operable windows so the tenants can control the amount of natural light and privacy. A vertical volume is carved all through the four levels to allow light from above to penetrate all the way down to level one, giving relief to the deep floor plates, both spatially and experientially. The rear yard setback becomes a communal, urban garden with various densities of vegetation. 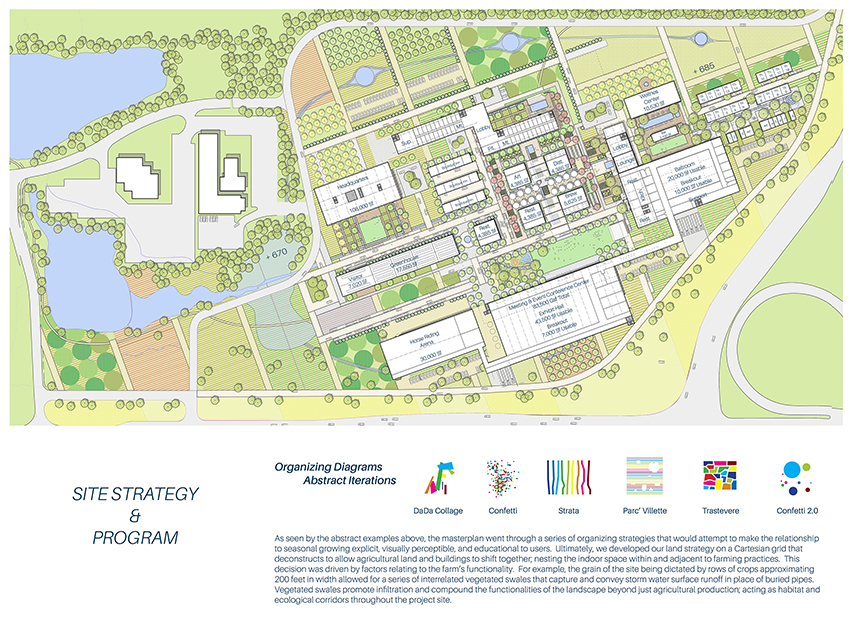 Farm at Crossroad Commons, HKS (Merrillville, IN) – Dean White was the 260th wealthiest person in the United States before his passing, and his entrepreneurism reshaped perceptions of the region, attracting hundreds of thousands of visitors a year to Merrillville, a town of 35,000. After his passing, his legacy was re-envisioned in physical form. Crime, an erosion of identity and culture, and poor health are serious issues that beleaguer the community of Merrillville. Through integration of ecology and history, public and private spaces, innovative performance- based design, and advanced environmental systems, the ambition for the project is to resolve these outstanding issues affecting the community by creating a new, profitable philanthropic model. The result is a continued legacy manifest through architectural form and space intrinsically tied to the ecology of the region. 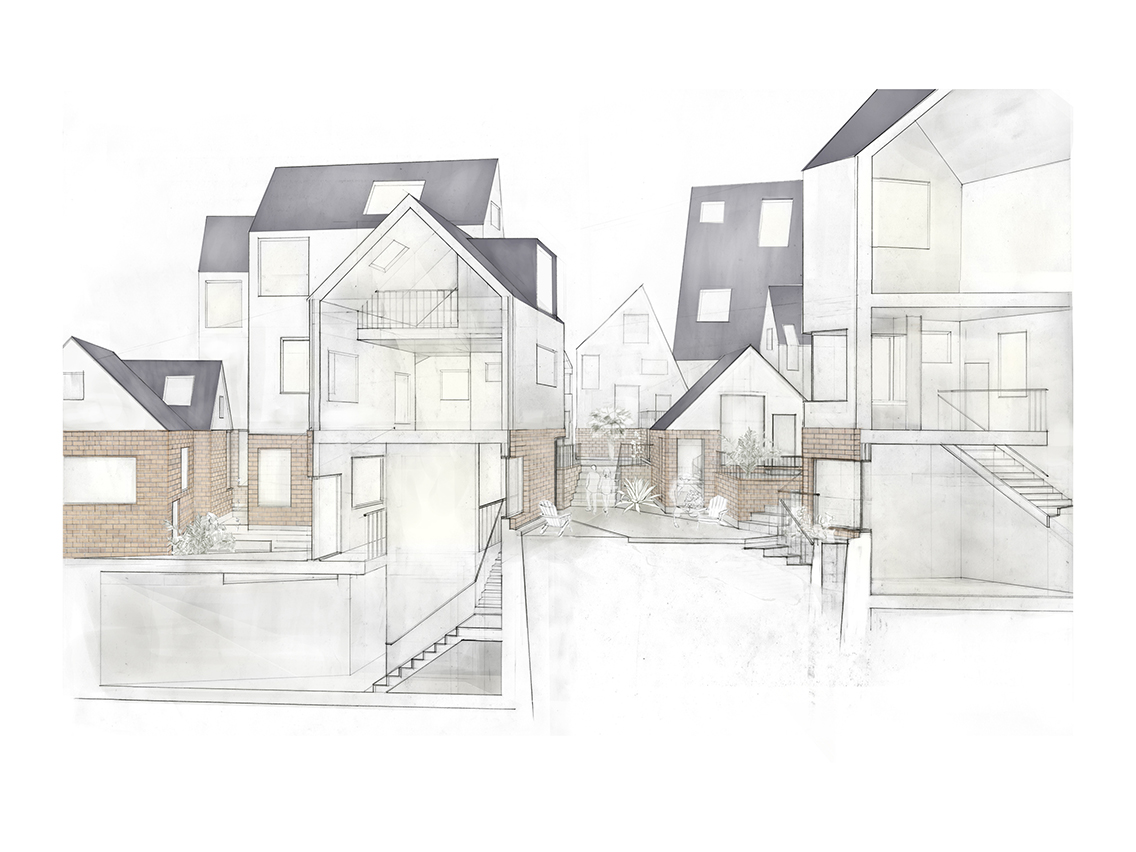 A Home is Not a House, Krishnan Mistry + Alison Walvoord, The University of Texas at Austin, (Austin, TX) – The city of Austin is booming, however, there is a major housing problem. Current code promotes either single family homes or dense housing blocks. Both seem to promote isolation despite being two vastly different approaches to housing. This project intends to find a happy medium between the two by juxtaposing the ideas of individualistic expression and collective living. 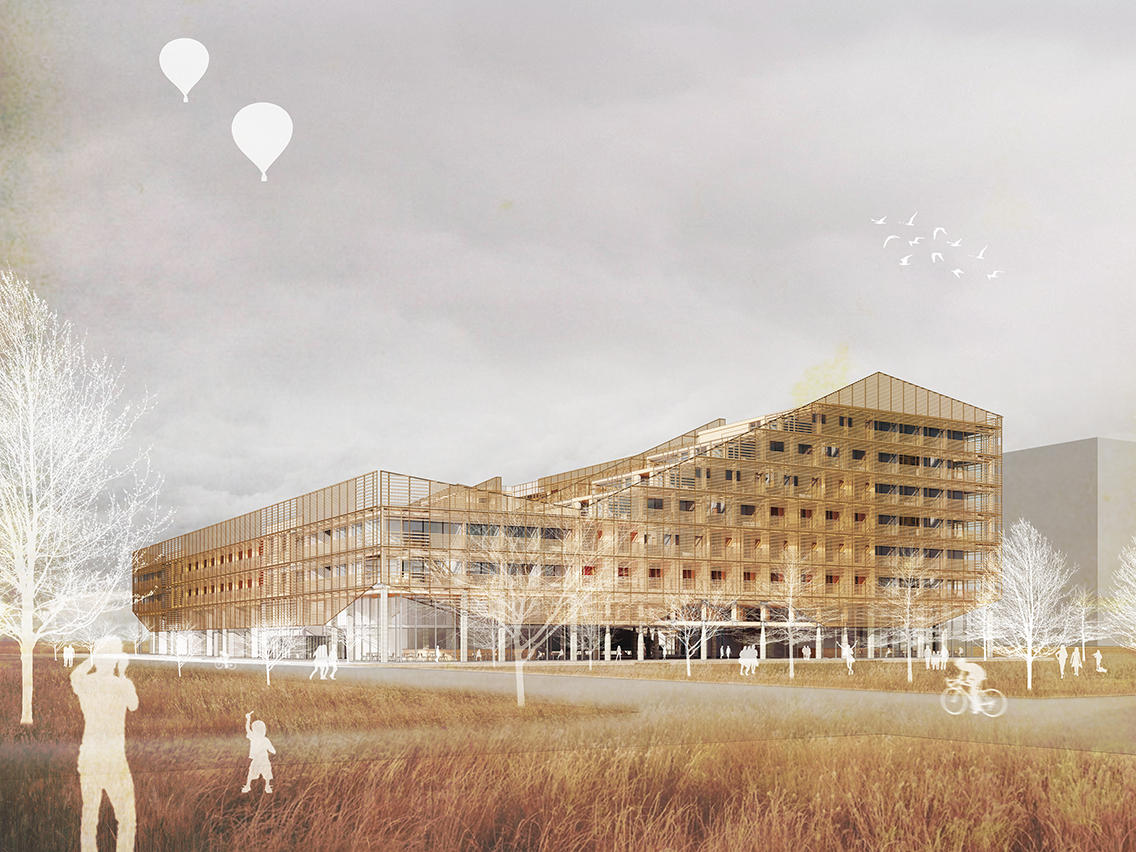 TUM - Garching Student Housing - Architecture for Dwelling & Social Interaction, Francisco Resendiz Carrillo + Diego Zubizarreta Otero, The University of Texas at Austin, (Garching, Germany) – Located north of Munich, TUM Garching is a technology-driven university that explores sustainable and innovative practices through academic and professional research. Sited in a 40-acre lot adjacent to the existing campus, this proposal would provide housing for 5000 students and an additional 5000 residents. Accounting for Munich’s increasing price of living and a high demand for affordable housing, the strategy was to research and propose a building type which would allow for efficient construction and result in affordable dwelling units. Dense, timber-built housing sourced with local forest products and manufacturing capabilities would attract a diverse population of students interacting with other residents through recreational and civic venues interconnected through a central spine of parks and walkways. 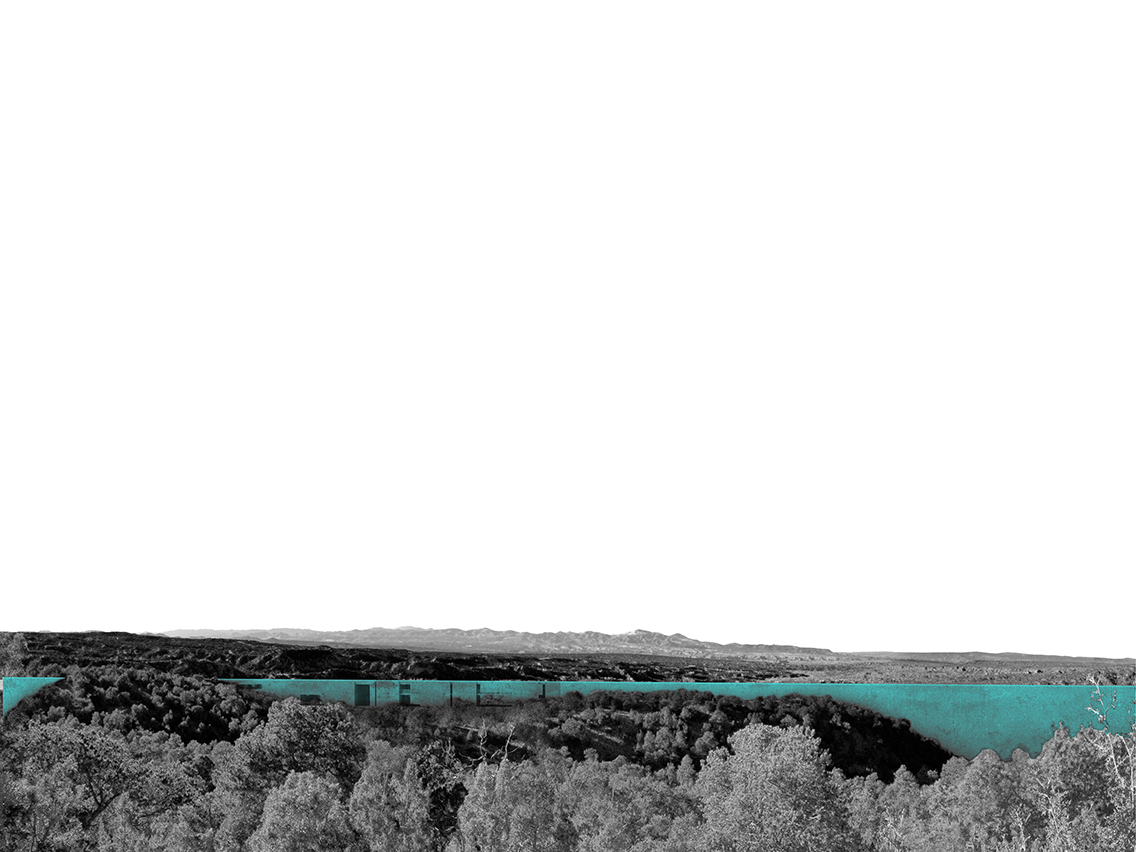 Artist Residency, Prarthan Shah + Nicole Vice, The University of Texas at Austin, (Santa Fe, NM) – This artists’ residency, located outside Santa Fe, is a collaboration between two architecture and two fine art students. The chosen site has an existing house, home of two art collectors, and multiple land sculptures dispersed throughout the hilly terrain. The proposed building is situated on a low ridgeline, distinctly separated from the existing house, which provides views to both the higher hills of the Santa Fe National Forest to the east and out into the larger Santa Fe Valley to the west. The building is organized through two masses along the exterior of the building where all the service spaces are carved or subtracted from the thickness. This leaves the interior of the building to be open served spaces with varying porosities. The programmed interior spaces become internalized, which heightens the distinction between the exterior and interior. While the main interior spaces are structured, the plan invites a unique opportunity to carve into the mass and create moments of discovery and individualization for the occupants. 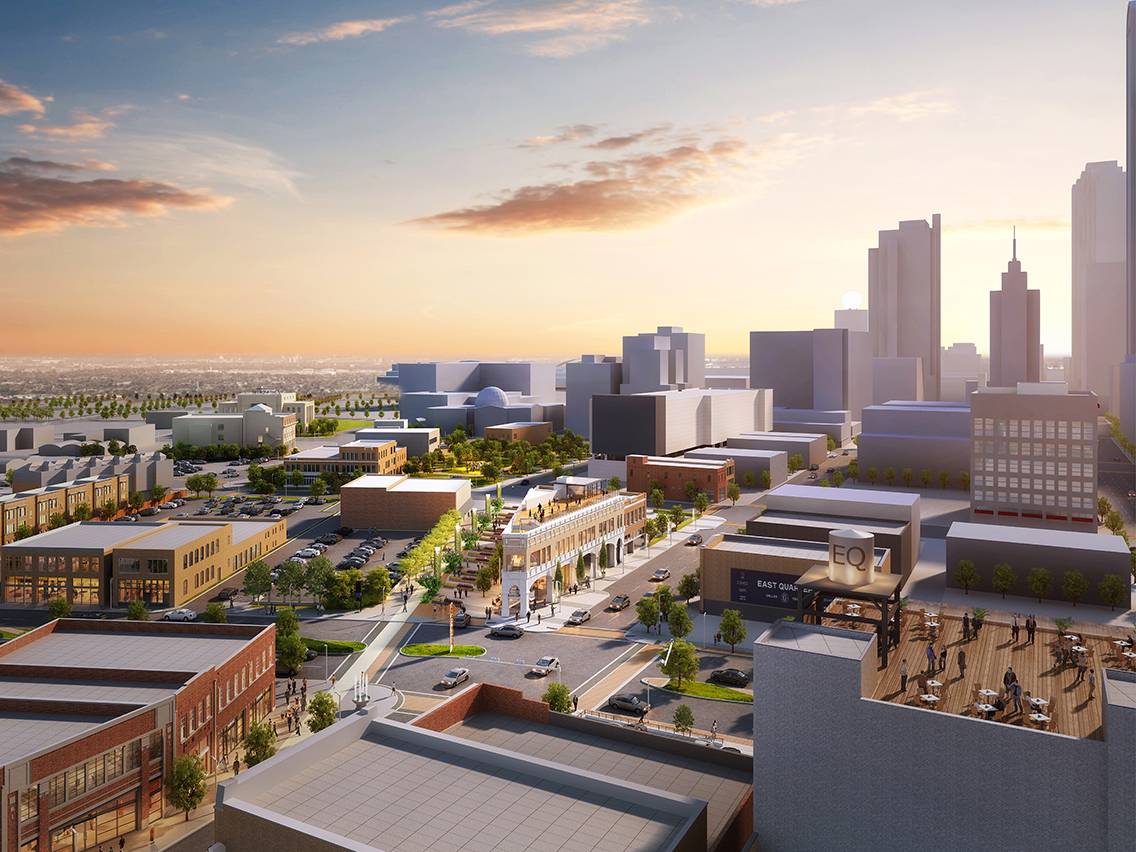 Mark Lamster of The Dallas Morning News selected the Magnolia Petroleum Building (OMNIPLAN) as the recipient of the Critic’s Choice Award. 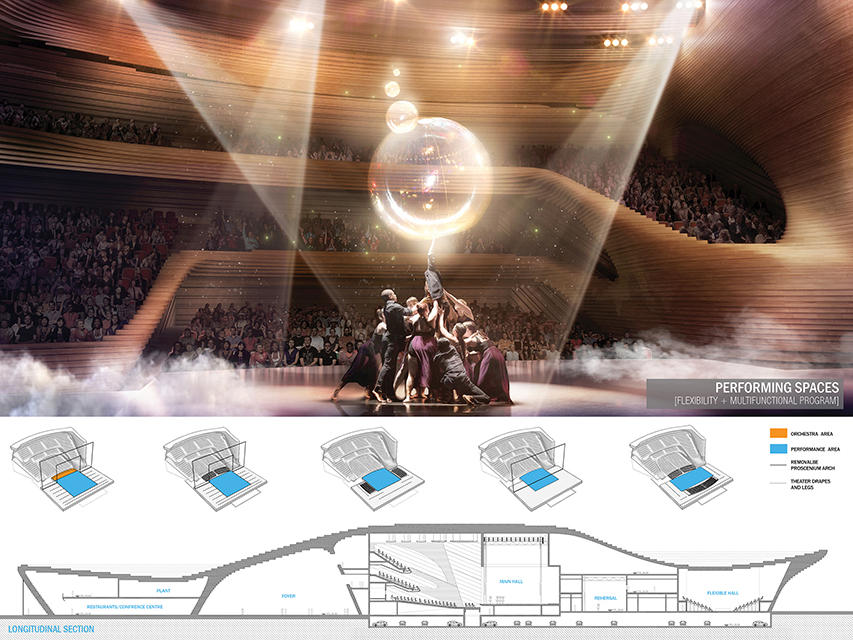 The People’s Choice Award was given to Kaunas Concert Centre (CallisonRTKL) in the professional category.

Unbuilt Design Award entries may be any building design, conceptual or theory-based design study, interior architecture, restoration, or urban design/planning project for which the documentation has been complete since January 1, 2014. The 40 Unbuilt entries featured a range of project typologies across the globe—including skyports, Amazon HQ2 proposals, health facilities, residences, and experimental studies meant to provoke thought and further discussion. View the complete gallery of 2019 entries and recipients here.