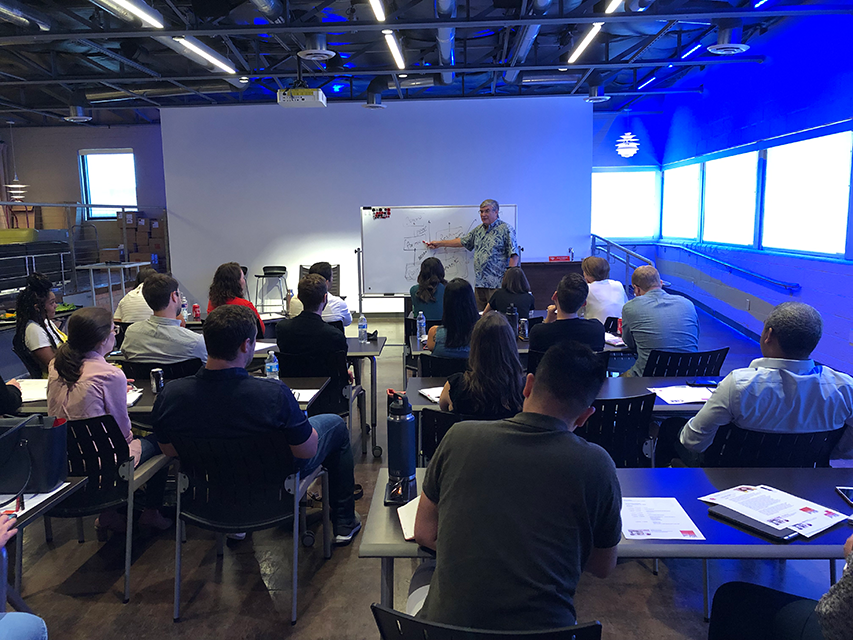 The primary topic of discussion with Pete revolved around two main themes: foresight and commitment. Foresight being the ability to predict the future and remaining agile to change. Commitment – in the context of the discussion – being the willingness to stand up for what is right and true.

The example provided for the discussion was Plato’s book “The Republic” where he examines the concept of justice as it relates to the three societal categories. The lowest category includes the People of Bronze – producers (artisans, craftsman, farmers…etc). The middle category includes the People of Silver – warriors (professionals by today’s standards, including Architects). Finally, the highest category includes the People of Gold – guardians (leaders, philosophers, rulers…etc). The interesting conclusion Plato makes is that the highest group of people (People of Gold) have the innate quality of being rational, moral, and more just than all others. These people have the responsibility to guide and educate those in the lower classes about morals and justice based on their capacity to understand these concepts – this relates to how leaders influence others. Another interesting concept from Plato was his notion that those in these leadership positions in society should be groomed and trained a certain way – physical fitness requirements, learning certain types of knowledge, traveling around the world, and learning about philosophy. Plato uses the allegory of a cave to illustrate the progression of philosophers (leaders) as they develop their souls. The scenario he gives is that of a group of people who are bound within a cave their entire lives and are only able to look in one direction – this is all they know and believe. Then they are broken from their bounds and can look around and see the elements within the cave. The final stage is when they emerge from the cave and see the reality of things – the sun, trees, and everything else that makes up our reality.

The challenge Pete poses to us is this: if we had a choice to go back into the cave to lead others out (with the possibility of being outcast or even killed for our presentation of “reality”), would we do it? This example relates to our commitment as leaders to stand up for what’s right and educate others, even when it may put us in a precarious position. How far are we willing to go to stand up for what is just and right? There are situations, Pete explains, where we have a choice to stand up and disagree with others or go along with the group consensus: the first situation, is called “management of agreement” where people make a collective decision that goes against their personal thoughts and feelings. The story example is called the “Abilene Paradox:” a family is comfortably playing games at home when the father-in-law suggests they all take a trip to Luby’s restaurant in Abilene which is an hour away. Everyone agrees and says it’s a good idea. The drive is hot and long. The food at the restaurant is bad. When they finally return home, they are exhausted. Someone ironically says: “Well that was fun wasn’t it?” Everyone chimes in about how horrible it was and how it was a crazy decision in the first place. The father-in-law finally says: “Well shit, you could’ve said ya didn’t wanna go!” This illustrates how the concept of “group think” can lead individuals to go along with the group decision and not disagree for fear of creating discontent. The second situation that can call our commitment to good in question, is called “group tyranny” where people know they are participating or wrong, immoral or unethical behavior. In both situations, standing up for truth and justice can be at least uncomfortable if not personally damaging. Pete noted that we are currently witnessing examples of group tyranny in our government.