COTE Tour of The National

Brought to you by: Committee On The Environment 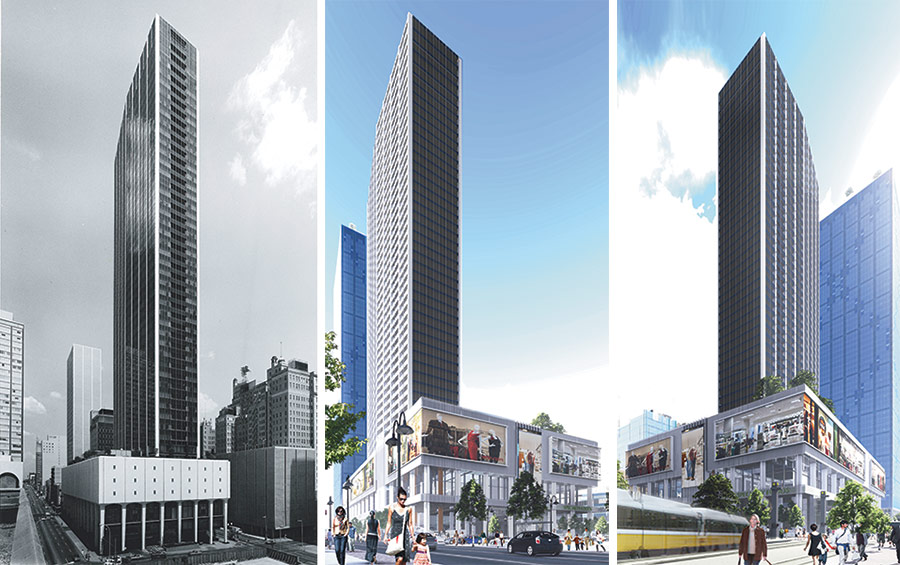 All tour participants will be required to wear face masks and social distance.  The number of people able to participate may be limited if registration exceeds the capacity to maintain social distancing.

PROJECT DESCRIPTION:
One of the largest adaptive reuse projects in the state is opening in the core of downtown Dallas, where Todd Interest is reviving the former First National Bank Tower into a vertical mixed-use development. It’s the last major office tower to be revived in the urban core—and the largest.  The sheer size of the building made it the most challenging historic renovation project ever undertaken in North Texas.

The 52-story, 1.5 million-square-foot tower occupies an entire city block bounded by Pacific Avenue and Akard, Field, and Elm streets. It will include office, residential, and retail space and be anchored by a 219-room Thompson Hotel, which opened in 2020. And now, it has a new name—The National.

Efforts to renovate the 52-story, midcentury modern skyscraper have been underway for almost a decade. Along the way, the building had four different owners, went through bankruptcy and faced foreclosure.  Finally, Dallas developer Todd Interests took the reins of the redo and is pushing the project to the finish line.

“When First National Bank Tower was completed in 1965, it was the tallest building in the United States west of the Mississippi river, and it made a statement for the city of Dallas. First National Bank Tower will soon stand tall again, as it will undergo one of the largest historic renovation’s in the history of the United States. We are excited to bring this important building back to life with new energy for future generations to enjoy,” said project lead and Partner Philip Todd. The 450-million-dollar deal is the latest in Todd Interests’ passion for historic projects Downtown like the Post Office building on Ervay and the 18 historic buildings being renovated as part of the East Quarter. The George Dahl and Thomas E. Stanley architecture of the First National Bank Tower was one of many things that drew Todd Interests to the project.

“Without question, this is the most complicated and challenging adaptive reuse project we’ve ever taken on as a firm. Its complexity is not only in the constructability and redevelopment but in the legal documentation of the Historic Credits and the master-lease pass through structure. The sole reason the opportunity exists to date is two-fold;  the unwavering commitment of Andres Construction and their loyal sub-contractors to stick with the project for over two years solely  complimented by the City Of Dallas’ commitment to provide special TIF proceeds to preserve such an iconic, historically significant asset to our great city,” said Todd. Garrett adds, “The vision for the First National Bank building re-do echoes the goals of The 360 Plan. The innovative design and structure will be noted in the building’s LEED designation, the exterior marble restoration, and exterior lighting. Delivering a Thompson Hotel is not only a win for the project, but is a victory for Dallas, proving up the strength and attractiveness of this market. It joins recently completed and currently underway projects like The Statler Hotel & Residences, the $100 million AT&T Discovery District, East Quarter, and four new signature parks.”

"Merriman became involved in the repositioning of 1401 Elm a decade ago when we were engaged by Colliers to provide a feasibility study to take the building to market. Since that time, we have been fortunate to continue with the project through owner and programmatic changes. We passionately believe that the current design and program is the highest and best use for the project and will greatly benefit Downtown Dallas,” said Aimee Sanborn, Principal, Team Leader at Merriman. Apartments on the 48th floor will boast being the highest Downtown, and street-level activation through retail and careful design will be accessible to all.

A 2017 demolition by Andres Construction included 5.6 million square feet of asbestos abatement, and was lauded as the largest such project ever in Texas. There was a lull, however, between the interior demolition work and the new renovation phase.

The project site, 1401 Elm Street, is in the Main Street District between Field and Akard Streets, and is adjacent to the Akard DART Station. A key consideration in the redesign is to include roughly 27,000 square feet of retail space adjacent to that DART Station. There will be retail space on the first floor, which is a basement level, and on the ground floor along with restaurant space, a hotel lobby and a residential leasing office.

The second above-ground floor will be dedicated to office space and common areas, according to the building’s permits. One floor up, the building’s former bank lobby with its double-height ceiling is being converted to a flex ballroom with a maximum space of 13,000 square feet.

The hotel’s 218 guest rooms span the 11th to 20th floors. The hotel will be managed by Thompson Hotels, a fast-growing hospitality brand in the Texas market. The building’s 324 apartment units will occupy floors 22 to 48. Most of the ninth floor, however, will be a common outdoor roof deck with amenities for apartment residents.

The amenity deck combines resident and hotel amenities on one level — to paraphrase Stefon, “this place has everything.” There’s a long, narrow 3.5-foot pool with a lounge, and beside it sits an outdoor hotel lobby desk next to an additional indoor lobby lounge. Around the corner facing Elm Street is a fitness area leading to a yoga nook at the deck’s far corner. Stroll past that, and we arrive at the outdoor dog run, which is next to an indoor dog concierge. Overlooking Pacific Avenue is a spa, then a resident patio.