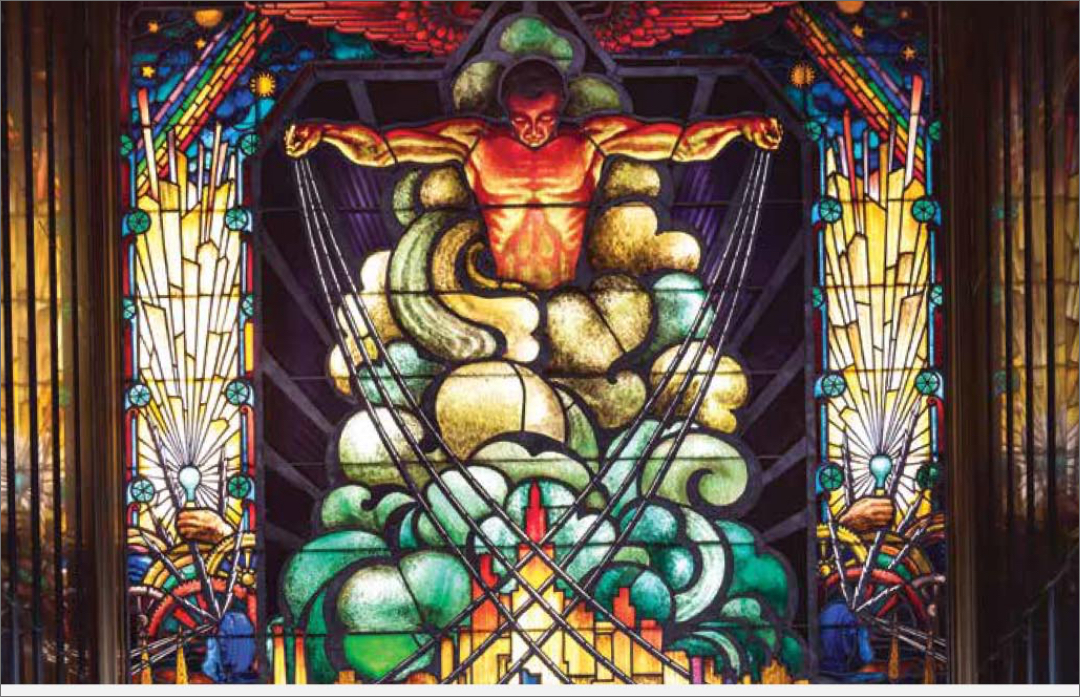 The Headquarters of Electricity

We take for granted the electricity that constantly flows to our homes and businesses to power our everyday lives and light our spaces, keep us cool or warm, refrigerate our food, and connect us to the world through our devices. It wasn’t always that way.

Back in 1881, the thought of electricity for Dallas was ridiculed as both dangerous and worthless, especially with the early failures to light London, New York, and New Orleans. Nevertheless, Alex Sanger, Julius Schneider, and W.C. Connor proposed bringing electric lights to the city when they incorporated the Dallas Electric Lighting Co. in 1882. After receiving their charter from the State of Texas, they successfully petitioned the City of Dallas for permission to construct and operate an electrical system. They quickly built the first power-generating system in Dallas in an abandoned wood-frame church on Carondelet Street (now Ross Avenue).

Electrical service began in 1883, lighting the streets and electrifying the streetcars. Service spread to homes and businesses as various electric companies built larger power stations. The Dallas Electric Co., chartered in 1890, constructed a massive brick power station on Griffin Street to the side of the Missouri, Kansas & Texas Railway tracks. By 1899, the site, originally one story with a basement, was expanded with a brick and steel boiler house. At the time, it was the largest power plant outside of New Orleans. In 1902, Dallas Electric Light & Power acquired the plant and property. In 1906, it built a new plant on the site to meet the growing electrical needs of the city. 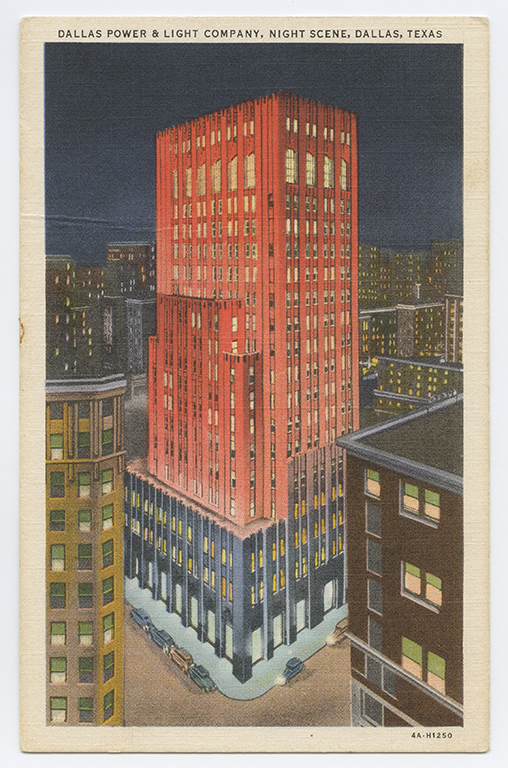 Competition grew as more companies provided electricity through their own stations. Seeing the need for consolidation, Col. J.F. Strickland started the Dallas Power & Light Co. in 1917. He received a franchise from the City of Dallas and quickly bought out his rivals, including Dallas Electric Light & Power. At the time, the new company served 25,000 customers. World War I limited growth, but expansion picked up rapidly afterward as households added newly available radios and refrigerators.

With the increased demand, the plant expanded in 1924, 1927, and 1954. Across the city, substations were built to handle the growth, with several, including in East Dallas, Oak Cliff, and North Dallas, built in the mid-1920s.

With the growing importance of electricity in everyday life, Dallas Power & Light began planning an equally important new headquarters in 1927. The Dallas firm of Lang & Witchell designed the thoroughly modern downtown headquarters, described as “American style,” which the firm said “has secured itself a permanent place in the art of architecture and will give the American cities in the future a distinct national aspect.” The modernistic 19-story stepped tower, with an exterior of buff brick and black granite, featured setback vertical elements and decorative limestone detailing. A departure from the preceding classically inspired buildings, it was one of several towers built at the time in a style now called Art Deco.

The tower, with a connecting two-story annex built on an adjoining site, filled the corner of Jackson and Browder streets. When completed in 1931, it was the tallest structure in the South constructed with welded steel and boasted the luxuries of the day — air conditioning, high-speed electric elevators, and indirect lighting. Of course, as the home of an electric company, the building was illuminated at night with rotating colors of red, blue and amber, brilliantly highlighting the setbacks of the progressive design. 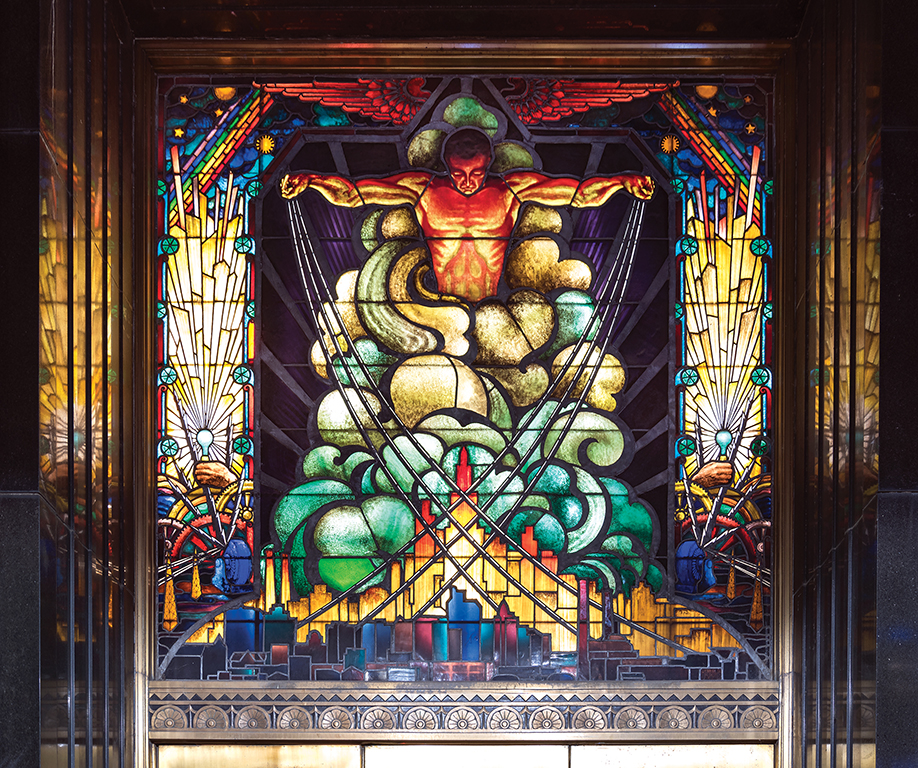 The entrance to the Dallas Power & Light building on Commerce Street features a dramatic stained-glass window with Thor, the Norse god, rising above a city and sending electricity through transmission lines from his fists. The window was created by Georgia Jensen and Roger Macintosh who also created many other stained-glass windows in Dallas. // Credit: Jim Parsons and David Bush/DFW Deco

Entering the annex facing Commerce Street, visitors stepped through a set of bronze doors and beneath a dramatic stained-glass window of Thor, the Norse god, rising above a city and sending electricity through transmission lines from his fists. (Georgia Jensen and Roger Macintosh created the window, along with many other stained-glass windows in Dallas.) Two carved figures, one representing Thomas Edison and the other Charles Proteus Steinmetz, were installed at the corners of the annex. While everyone knows about Edison, many may not know Steinmetz. He fostered the development of alternating current as opposed to Edison, who favored direct current. 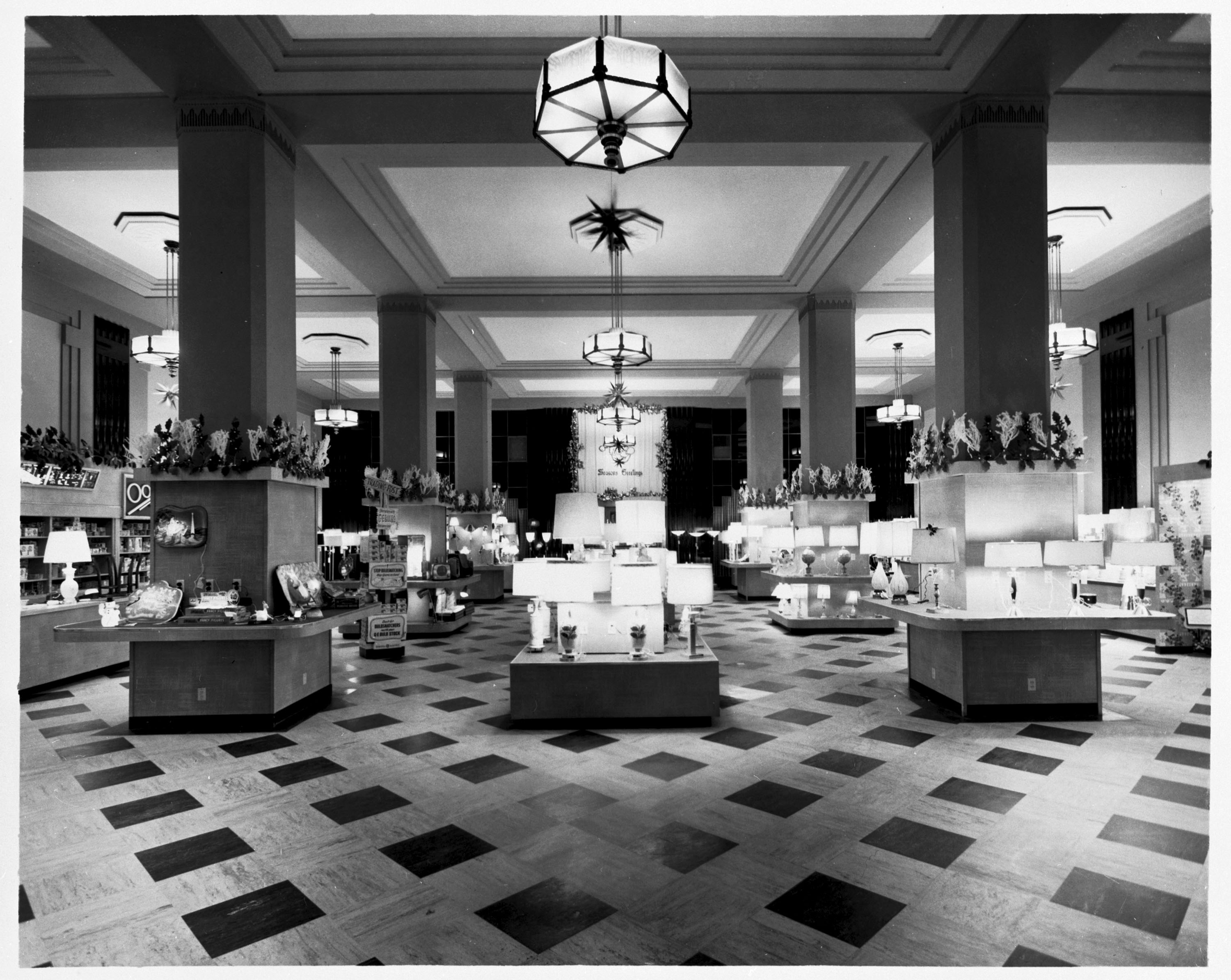 The Dallas Power & Light showroom, which was entered from the Commerce Street entrance of the annex, the main entrance for visitors to the building. // Photo Credit: From the collections of the Dallas History and Archives Division, Dallas Public Library

The annex, a center for innovation, displayed how the wonders of electricity could benefit daily life. Inside the main entrance, visitors passed by a showroom that demonstrated the latest electric products as they headed to the marble-lined elevator lobby for the tower or to the business area to arrange for service or pay bills. The basement exhibited a variety of commercial lighting fixtures along with a model storefront to demonstrate options for retail display lighting. On the second floor, interior designers and homeowners could view mockups to see how lighting could enhance window treatments, upholstery, and color schemes. A Spanish courtyard, with a vaulted ceiling painted and lit to look like a blue sky, led to an all-electric model home that showcased different lighting techniques and the latest in electrical appliances.

In 1984, Dallas Power & Light merged with three other companies to form Texas Utilities and moved its headquarters to the I.M. Pei-designed Energy Plaza in the early 1990s. The old headquarters sat vacant until Hamilton Properties purchased it in 2003 and redeveloped it into apartments. The main power plant was demolished to make way for American Airlines Center, which opened in 2001. Some of the early substations still survive and are used for office or residential purposes. 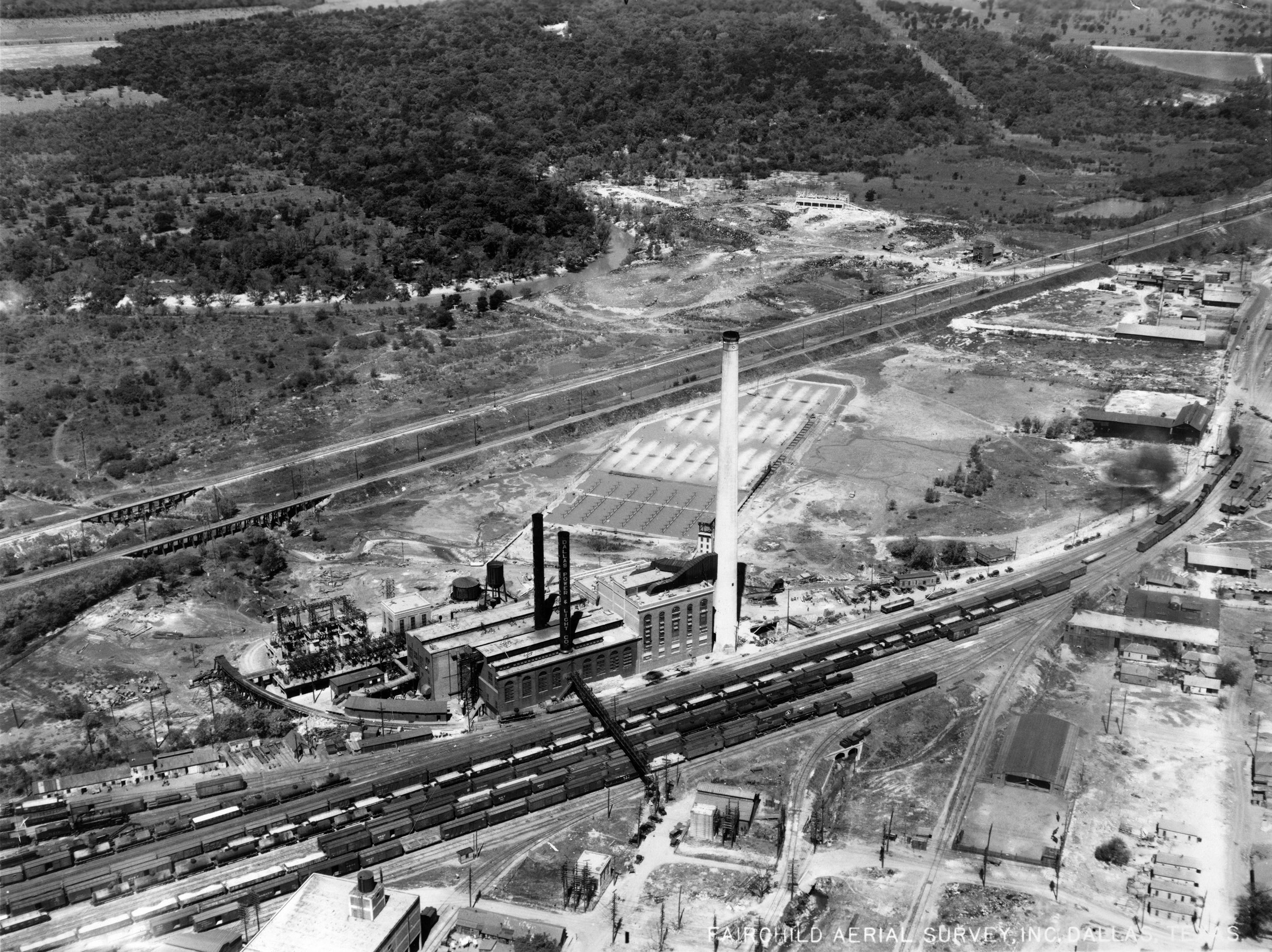 1906 power station, with expansions, which was demolished to make way for the American Airlines Center. // Photo Credit: From the collections of the Dallas History and Archives Division, Dallas Public Library

Dallas was on the cutting edge when electrical service came to the city in 1883, and Dallas Power & Light brought stability to the industry by consolidating the various power companies into one. That enabled consistent growth of the power system and provided for the expanding electrical needs of everyday life. The Dallas Power & Light legacy is still felt today, and the former headquarters remains an impressive sight with its “American style” that represented a bold and transforming industry.