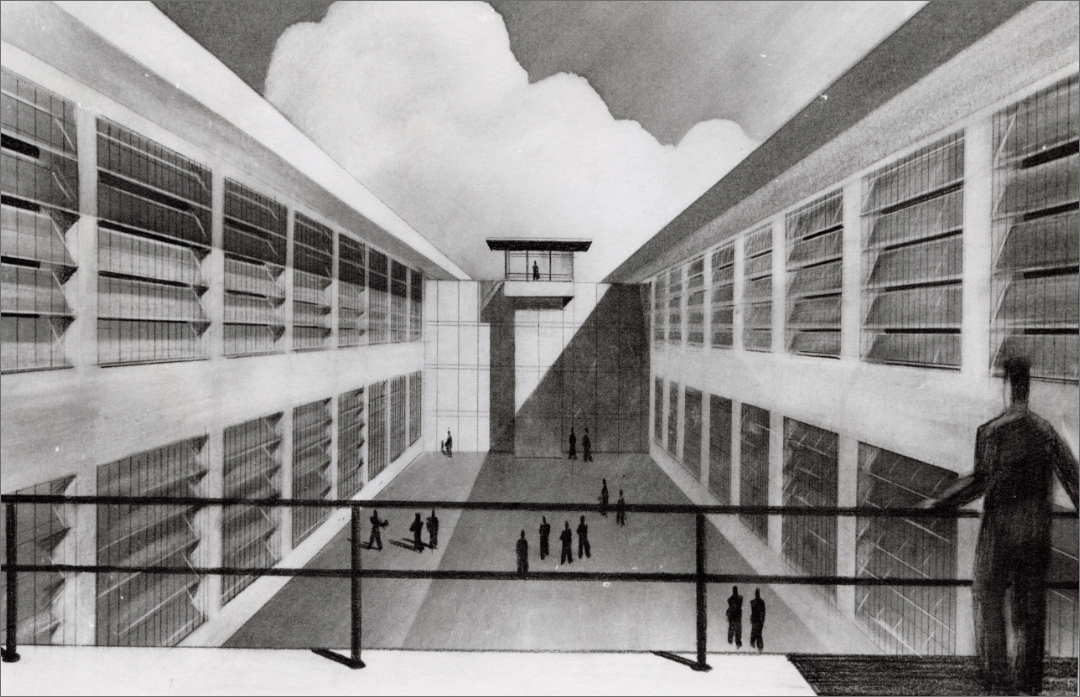 George L. Dahl. When Dallasites hear the name, their minds likely leap to Fair Park. As the architectural driving force behind the Texas Centennial Exposition in 1936, Dahl oversaw the complex of buildings that is one of Dallas’ three National Historic Landmarks and acknowledged as one of the best (if not the best) collections of Art Deco exhibition buildings worldwide.

People who are a little more versed in Dallas’ architectural history and heritage might recognize other designs from his over seven decades of work: buildings at the University of Texas at Austin, Neiman Marcus’ flagship store downtown (1927 and later additions), the Titche-Goettinger Building (1929), the mid-century modern Dallas Public Library (1954), all the way to the Earle Cabell Federal Building in 1971. Over the years, he designed office buildings, educational facilities, and a series of retail stores for Sears. As a promotional brochure for his firm said near the end of his days of professional practice, “45 Years as an Architect. 3000 Projects Totaling 1.5 Billion Dollars.” 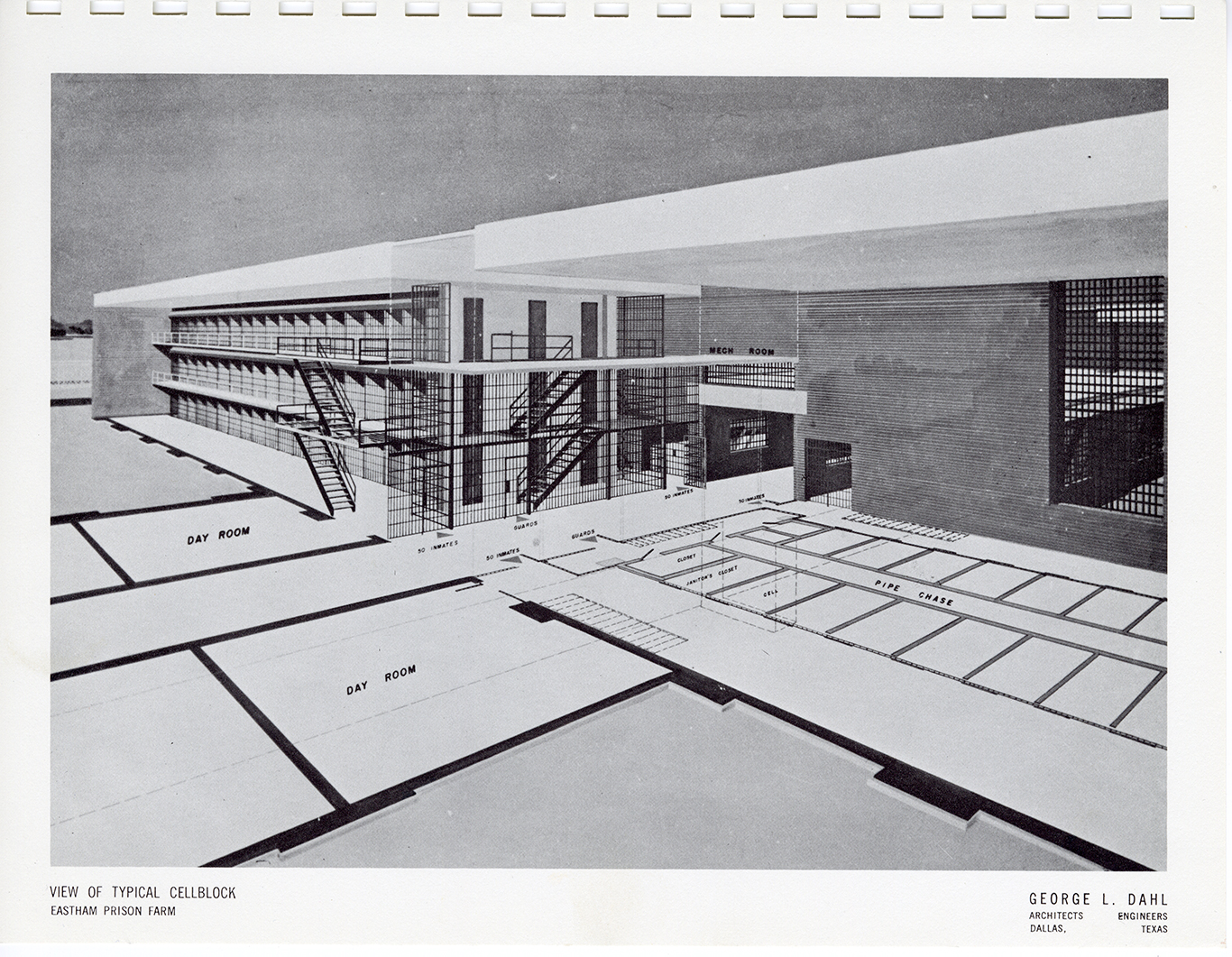 What most people don’t realize, however, is that beginning in 1949 (with a Huntsville cell block the firm described as “a maximum security unit having 541 cells and in addition 23 cells for disciplinary isolation”) and continuing until 1975 (even after Dahl’s retirement in 1973), he and his firm received commissions for dozens of prison facilities operated by the Texas Department of Corrections.

Many of the prisons Dahl provided designs for had opened decades earlier; his buildings were modernized updates. As illustration of this, features described in the firm’s brochure on its prison work included: “Cell doors [that] are remotely controlled, individually and in groupings as may be selected by security forces,” “complete facilities for the daily showers of all inmates, the deposit of soiled clothing and in addition [the] care of the needs of all of the facilities within the walls, including the hospital,” and even “sewage facilities at Central [in Sugar Land] … the first step in a modernization program in anticipation of added facilities at the farm.”

The facilities ran the gamut from actual cell blocks to housing for guards, hobby shops, concession stands for prison rodeos, and an “abbatoir” at Huntsville, a slaughterhouse to fulfill some of the facility’s food needs. The firm also designed facilities for first offenders “in the age group seventeen to twenty-one” such as the Ferguson Prison Farm (1961), with spaces for vocational training, academic classes, and chapel attendance. It was touted as an “ultra-modern self-contained unit of Texas’ far-flung penal system.” 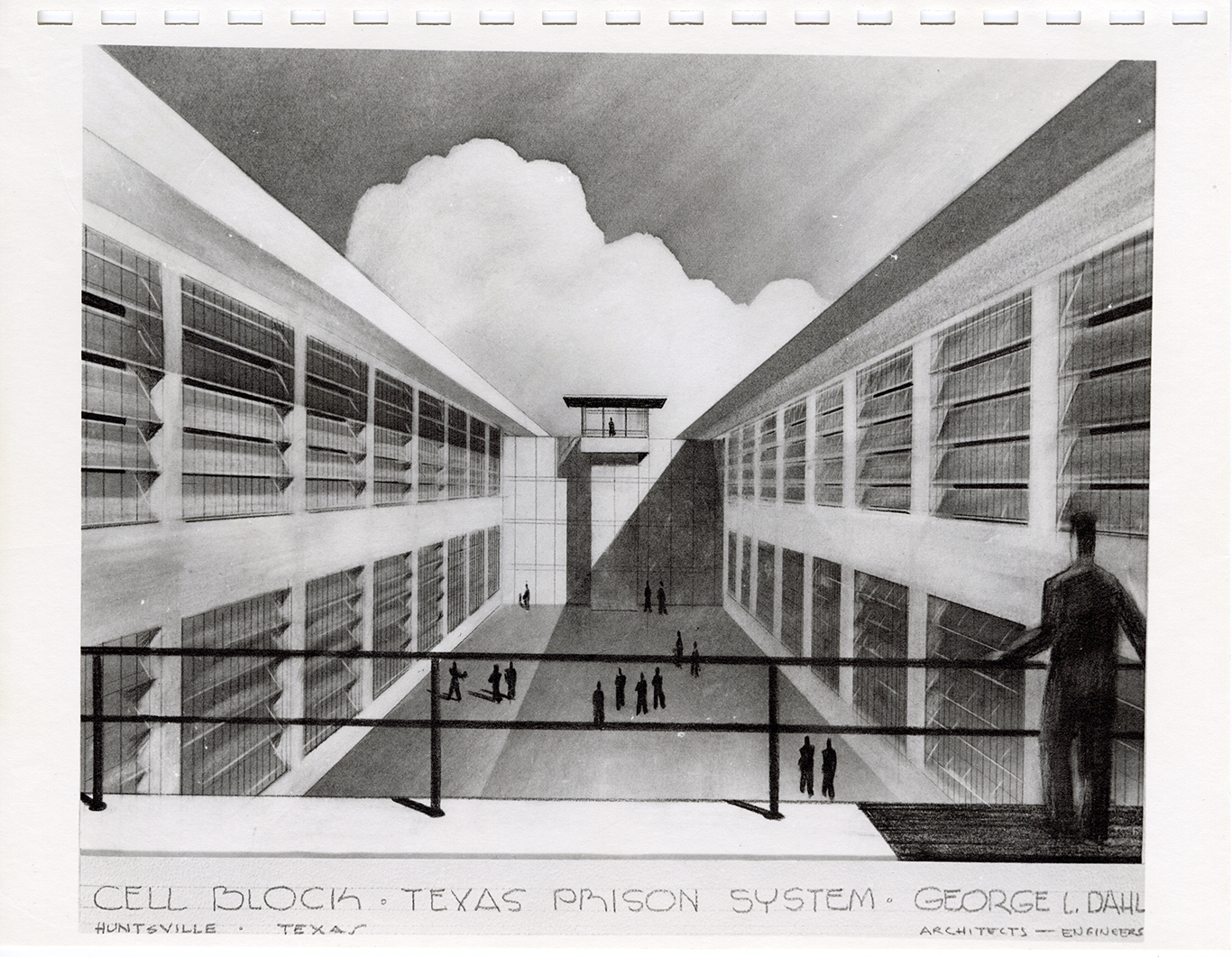 A capstone project in this genre was the 1970 Criminal Justice Center at Huntsville, with “up-to-date facilities for the graduate and the undergraduate students of Sam Houston State University in addition to the training of men and women involved in the science of penology and law enforcement within the Texas Department of Corrections [and other agencies in the state].”

Overall, a list of the Dahl firm’s work on Texas prisons runs four pages in the brochure. An explanatory note at the beginning of the list clarifies the construction costs listed: “It should be pointed out in the analyzing of the particulars itemized that all of the construction at the Texas Prison System is done with prison labor and some materials are being made by prison labor. The cost of construction herein should be multiplied by at least two to ascertain the free world cost.”

Although not featured prominently in most lists of Dahl designs, the inclusion of this work in his publicly provided bios and a brochure highlighting the firm’s prison expertise makes clear there was no stigma attached to this niche of his design legacy. One might wonder, however, at the motivation to take on work in such an arena. (Note the recent controversy about whether architects should even be involved in the design of such spaces, especially solitary confinement cells and facilities for the death penalty.) 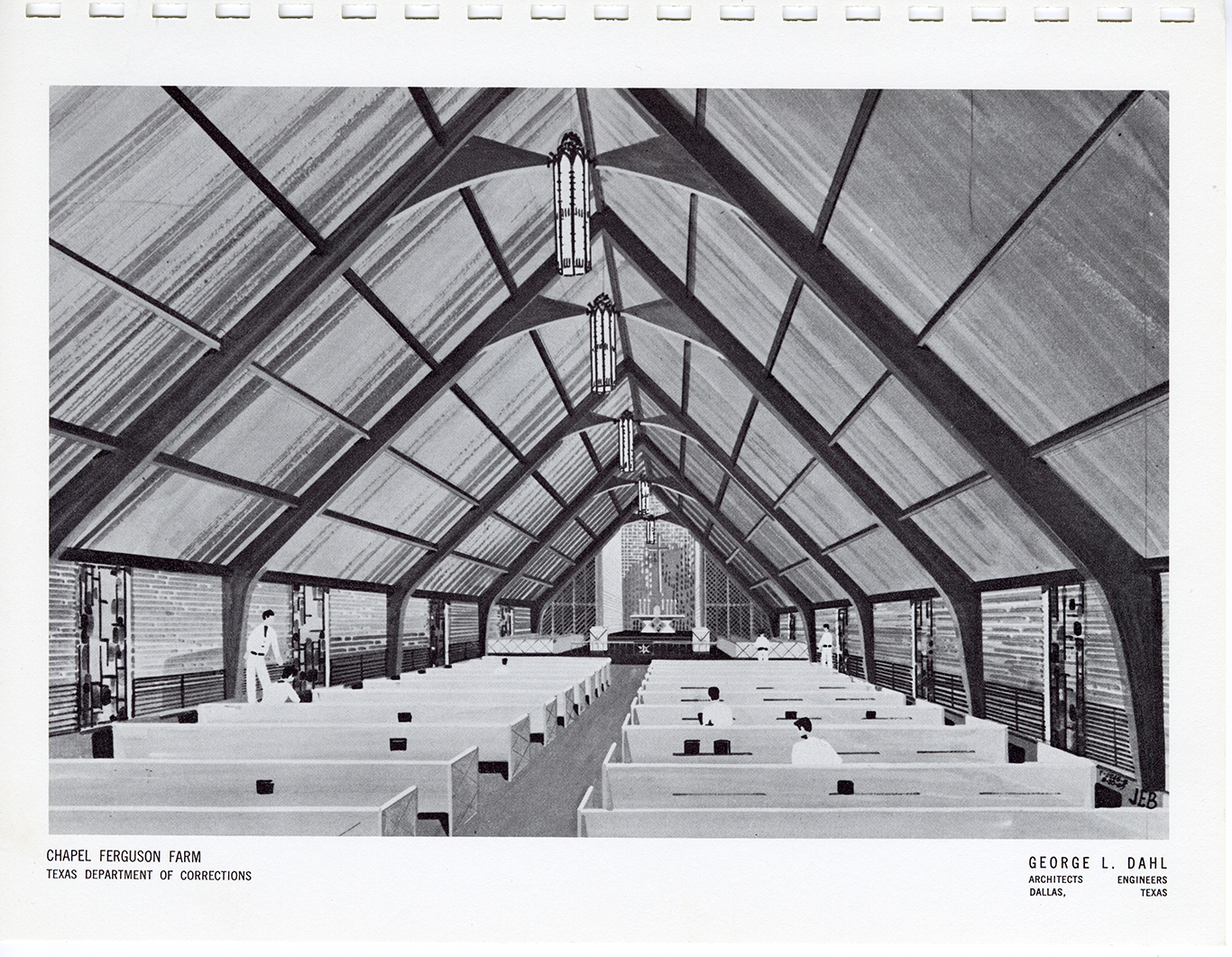 Perhaps it is in keeping with the overall generosity of spirit that Dahl demonstrated throughout his career and life. After all, his self-written entry in the 1976 Bicentennial Edition of Who’s Who in America reminds the reader that “you are here to contribute to the betterment of society.” Given the architect’s broad range of design work, from signature buildings to unglamorous warehouses and outbuildings, it is not that difficult to assume this was just one more source of revenue for the firm. Whatever the reason, it is a fascinating chapter in the oeuvre of an architect who critic David Dillon, Hon. TxA once described as a “stylistic chameleon.”

Do you have more information on this area of Dahl’s work? Did you work for his firm during this period? If so, we’d love to hear from you and learn more. Contact us at AD EX by e-mailing info@DallasADEX.org.