No doubt one of the most colorful and artistic facades in downtown Dallas belongs to St. Jude Chapel on Main Street. Dedicated to the patron saint of hopeless causes in 1968, the Catholic chapel was the vision of Arthur C. Hughes, a local businessman who helped raise funds to buy land and build the chapel, designed by architect Eugene Boerder.

The most striking feature of the exterior is the 29-footlong, 12-foot-high Genesis Mosaic, depicting the creation and life, that projects over the entrance. MIT Professor of Visual Design Gyorgy Kepes designed the mosaic, which includes over 800,000 pieces of smalti tile in 28,000 colors. The glass tiles were created by mixing molten glass with metal oxides to form a cloudy mixture, which was then poured into slabs and broken into pieces, a tradition dating to the Byzantine era. Venetian Art Mosaics Inc. of the Bronx, N.Y., fabricated the mosaic under the supervision of Constante Crovatto, president of the company. 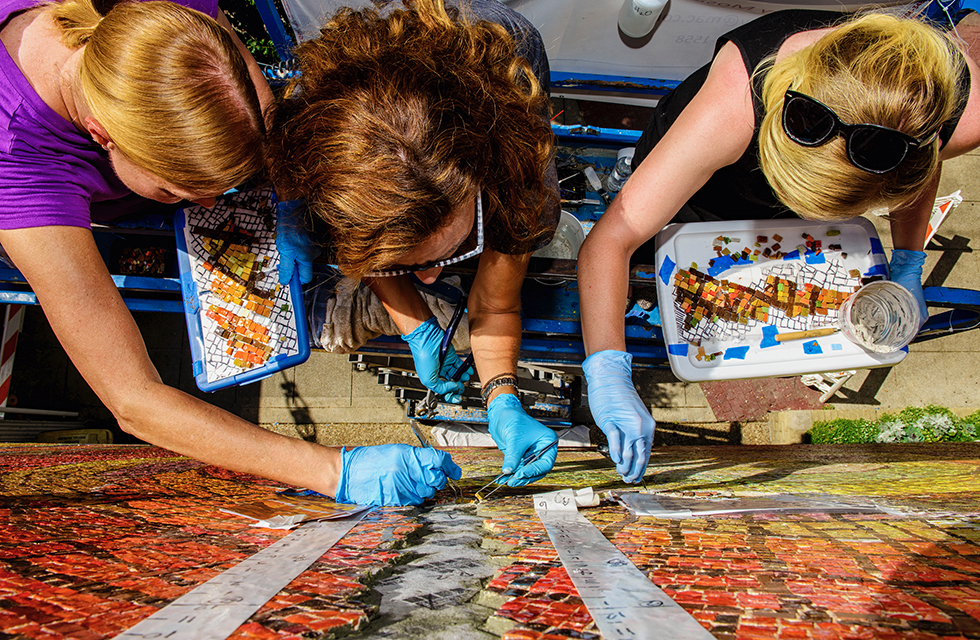 The restoration of the exterior tile surface of St. Jude Chapel was a painstaking process. Lynne Chinn, Julie Richey, and Callie Heimburger (left to right) are replacing the vintage smalti along the repaired fracture piece by piece. // Photo: Danny Fulgencio

After almost a half-century of weathering the elements, the mosaic portion of the facade had two major fractures, small cracks, missing tiles, and mildew under portions of the surface. As the chapel approached its 50th anniversary, Father Jonathan Austin of St. Jude sought the assistance of Julie Richey of Julie Richey Mosaics and Cher Goodson of Art Restorations Inc. to restore the exterior to its former glory in time for the celebration. 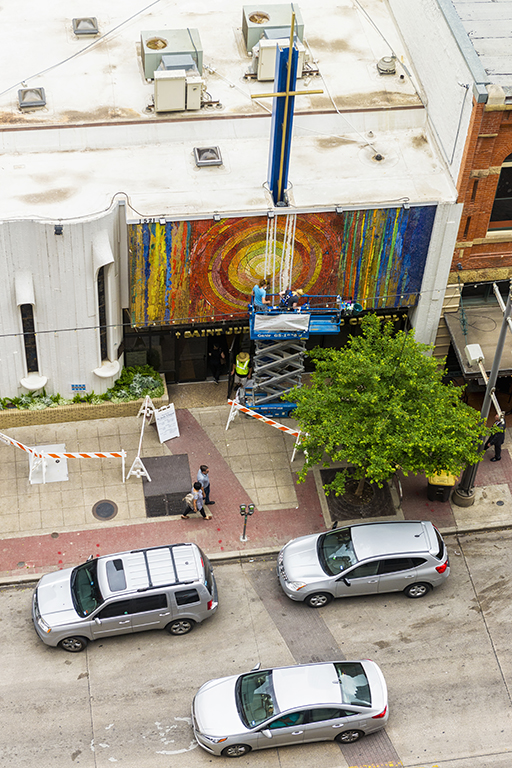 After the cracks on the facade were deemed stable by JQ Engineering in spring 2017, work started in earnest on the restoration. The location and color of each tile was mapped as it was removed and catalogued as the mildew was remediated and the cracks filled in. Miraculously, slabs of glass smalti used for the original mosaic were located at Miotto Mosaics of Carmel, N.Y. — the owner just happened to be the godson of the founder of Venetian Art Mosaics — and used to fill in spots where pieces were missing. After the tiles were replaced, the entire surface was cleaned by hand with dishwashing soap. After six weeks of restoration, the mosaic shines again, ready for another 50 years. “If no one can tell where we’ve repaired it, we’ve done our job well,” Richey says. Indeed, they have done it well, restoring one of the most unique and recognizable downtown facades. 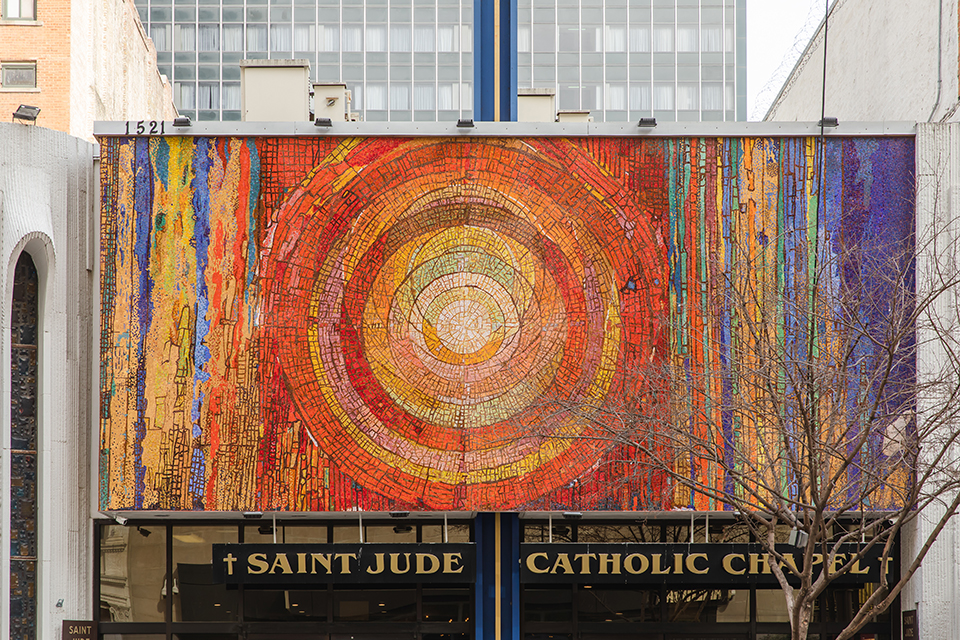 The most striking exterior feature of the St. Jude Chapel is the Genesis Mosaic, an image of creation and life using over 800,000 pieces of colorful smalti tile. Credit: Shaun Menary 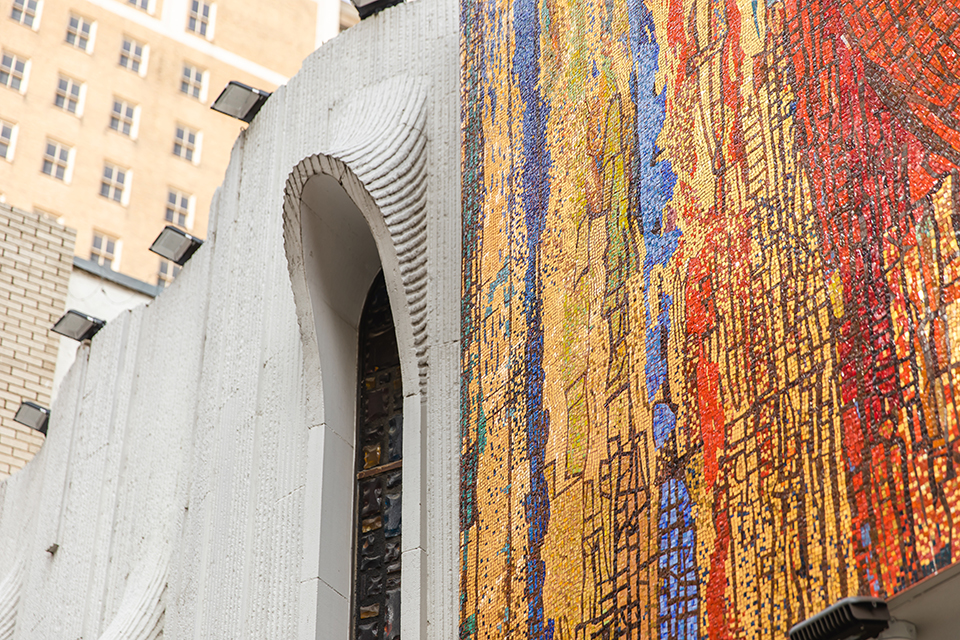 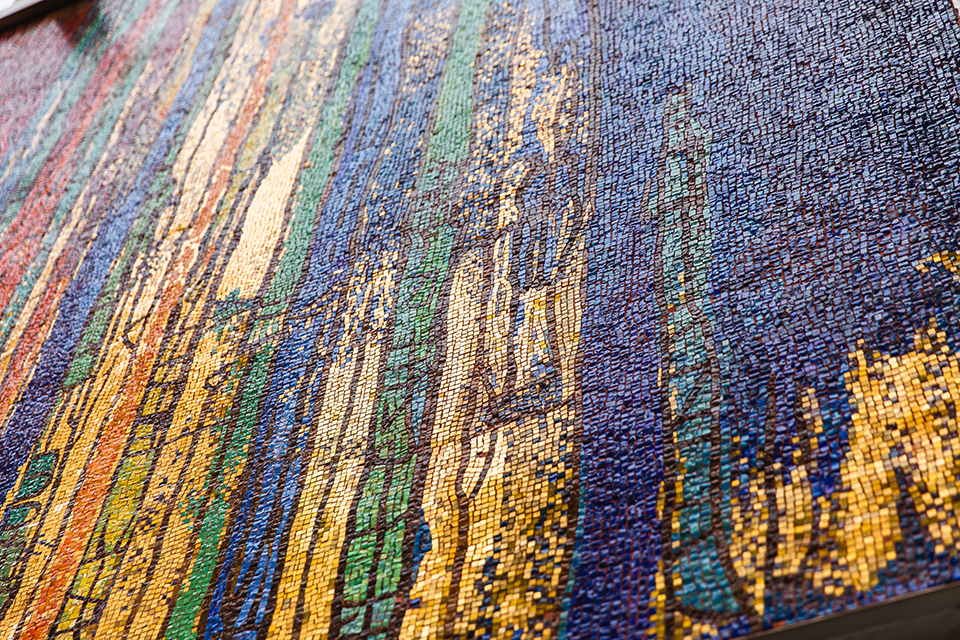 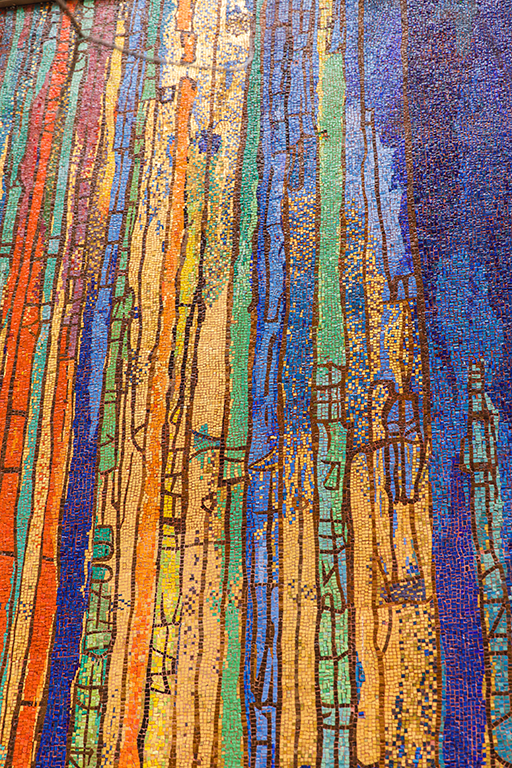 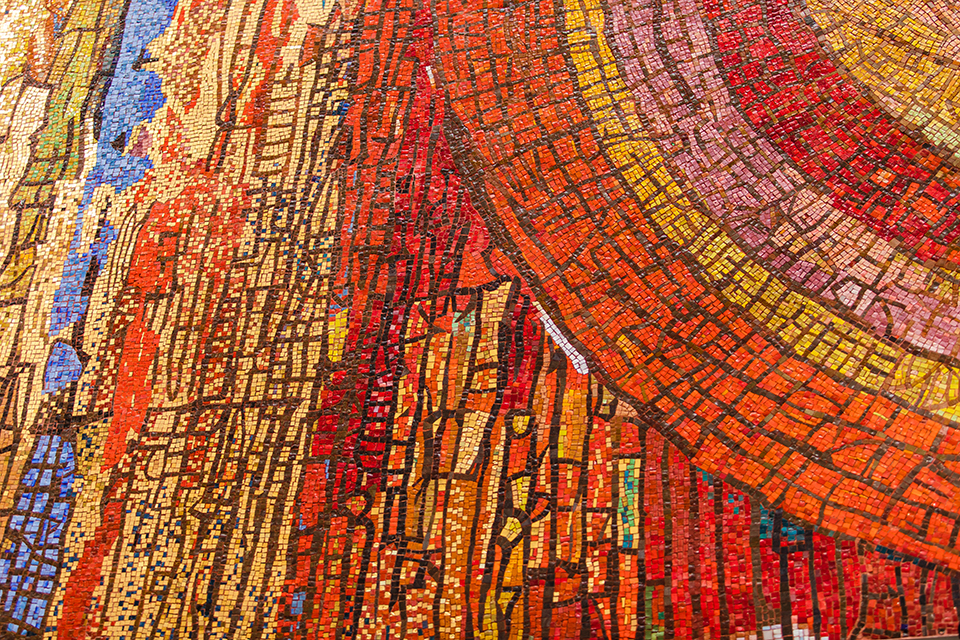