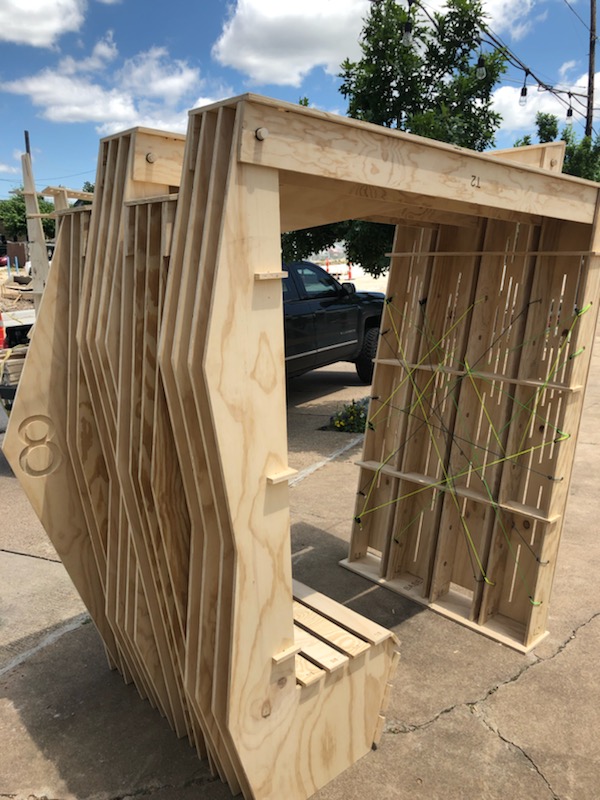 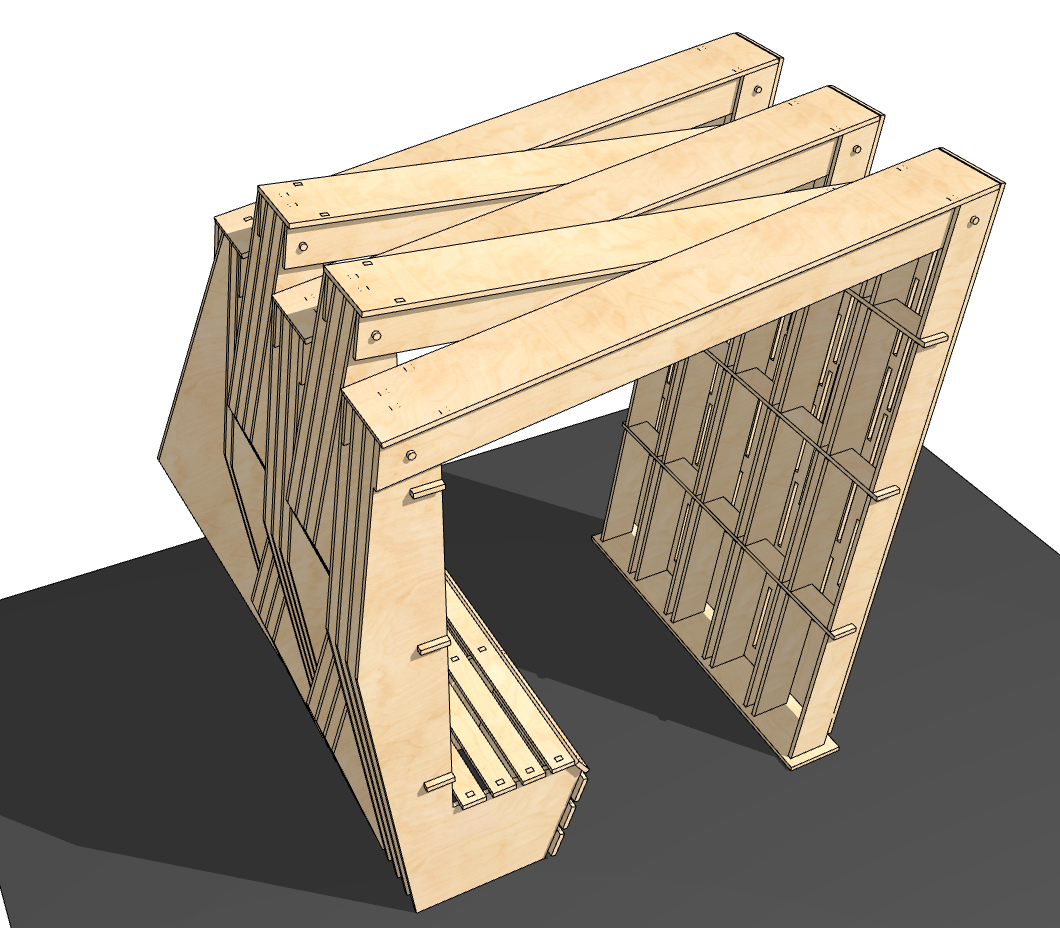 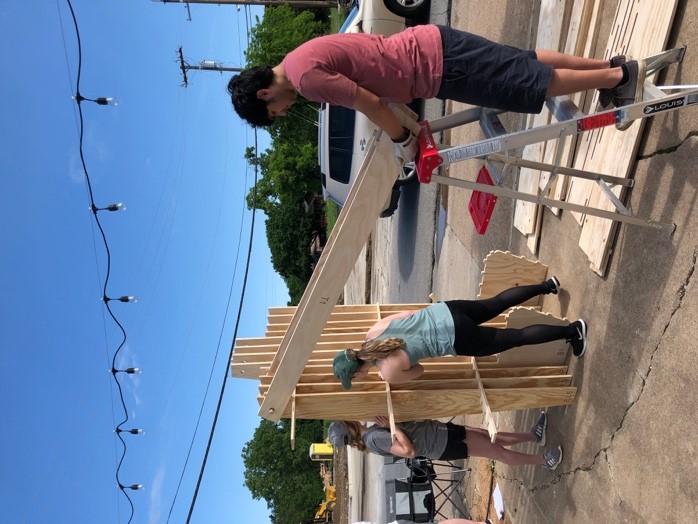 Over the past year, our firm has been working with the City of Tyler to cast a vision for the future of public transportation in our community. We found that the perception of riding the bus isn’t a glorious one, but quite the contrary. We have first hand experience seeing the potential of how the user can gain freedom by using public transportation, but we must first change the overall perception.

Our “Better Bus Stop” aims to not only improve the tangible qualities of a bus stop such as sightlines, blocking particulate matter, ample seating, and shelter, but also improve the user’s experience of the time spent in the shelter.

The front face of the bus stop utilizes perforations in a gradient pattern which become more dense at the sight level. This design feature protects the user from car pollution and also allows views through the front facade. The back wall, which is flat on the inside, gives the city a place to install maps or other advertisements. The outside façade provides a place for signage, indicating the bus stop number or other identification.

Our design is modular in nature and allows for expansion or contraction based on the city’s needs for each bus stop location. The design we’ve produced for the competition has four ‘bays’, but can easily become six, eight, twelve, you name it! Each bay acts independently of each other, tied together with front and back waffle pieces, making it capable of the additions as needed. 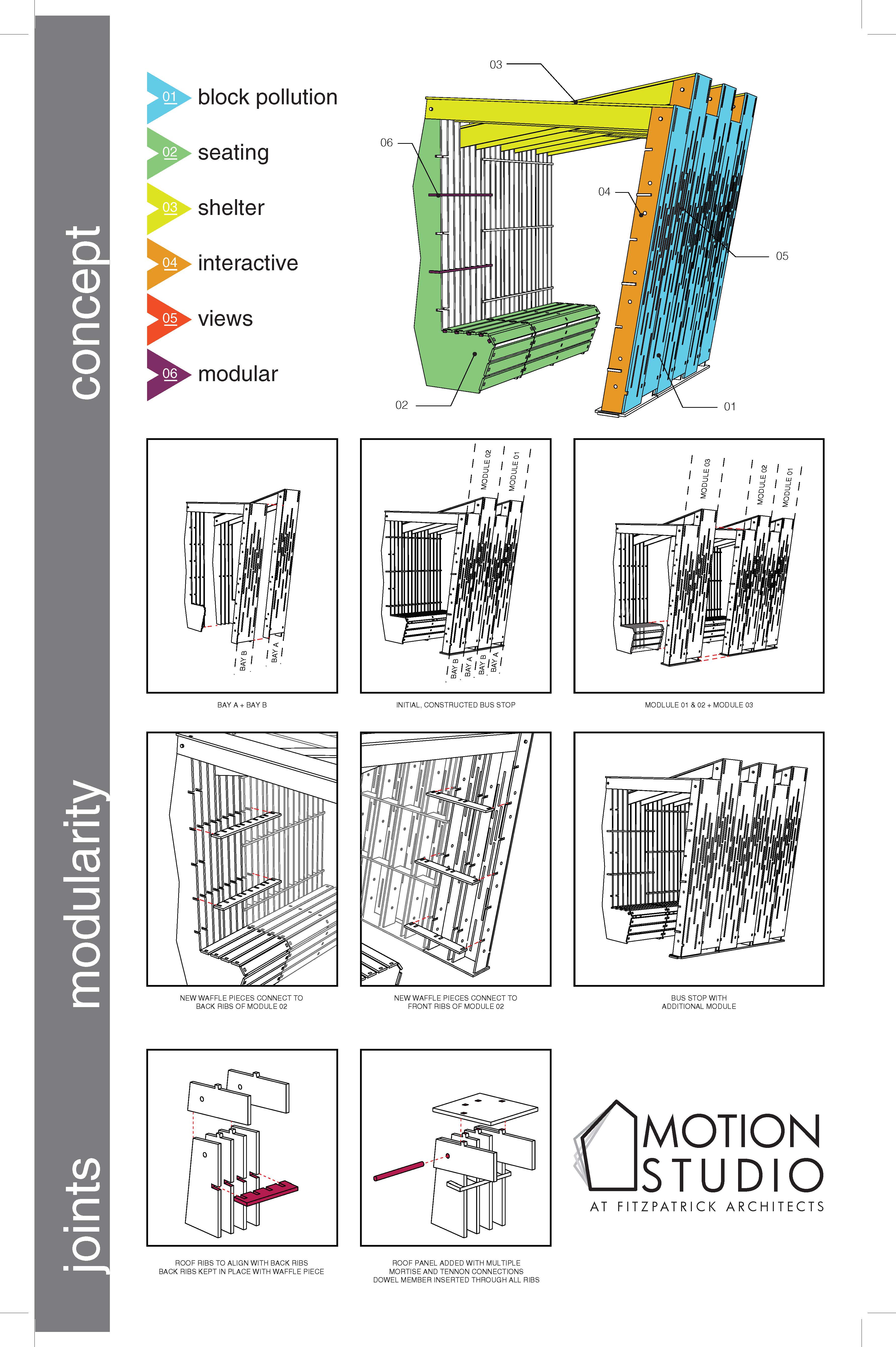 Our goal is to be mindful of the experience the user will have while waiting on the bus, so the design includes an interactive quality that both adults and children can enjoy. Elastic cords can be hooked into any of the holes located on the front legs, which allows every person who enters the bus stop to move the cords and make the space their own. The bus stop could even become a social media movement with a hashtag such as #makeyourspace! Let’s inspire the inner artist in all of us by activating the senses and evoking emotions the typical bus stop could not achieve! 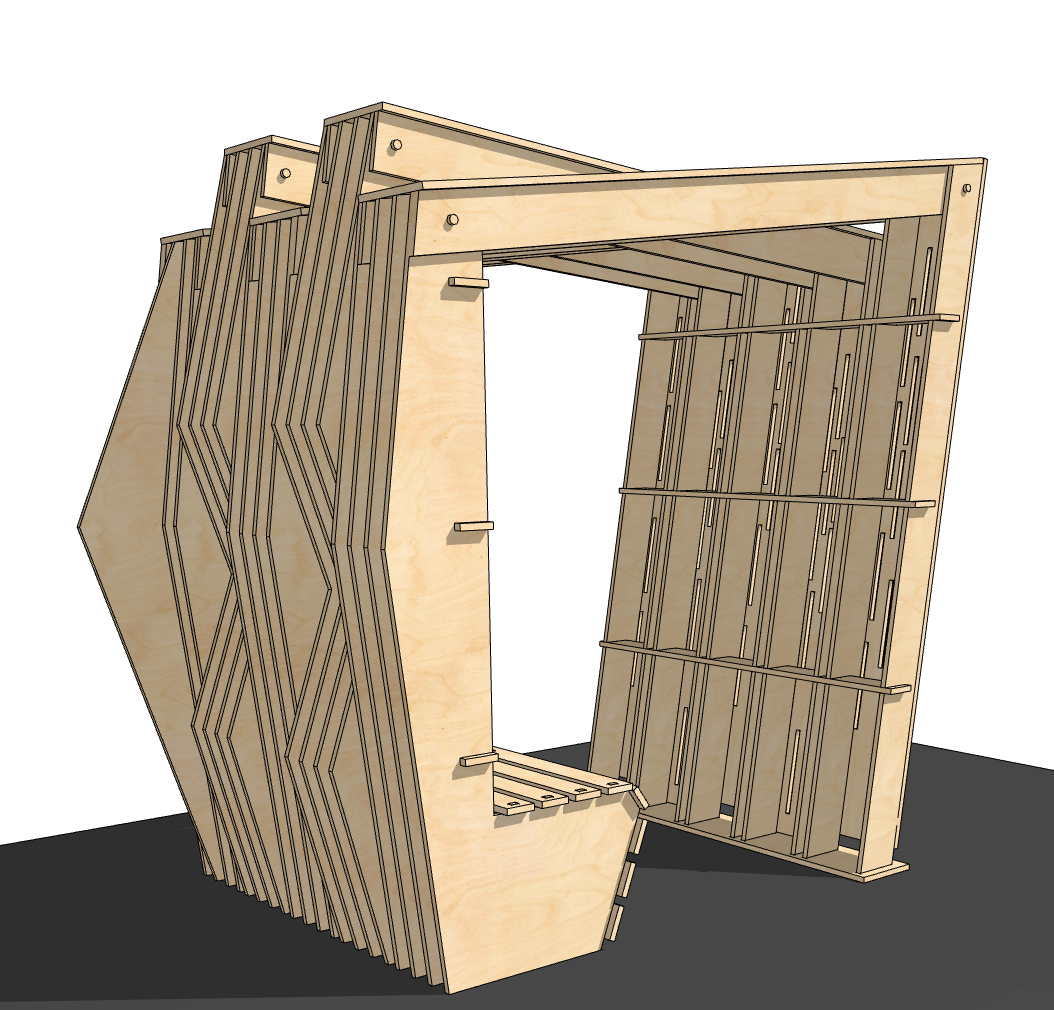 We started the design process in February by having sketching charrettes, building parti models, and modeling numerous iterations in Archicad. Although Better Block gave the option to use fasteners for ease of construction, we decided to stick with wood joinery techniques only. Our cut files were due to Better Block at the beginning of April, they did the routing in house, and we picked up our plywood pieces a couple weeks later. We then did a couple of test builds (only building a portion of the whole each time) to learn dos and don’ts of digital fabrication construction. 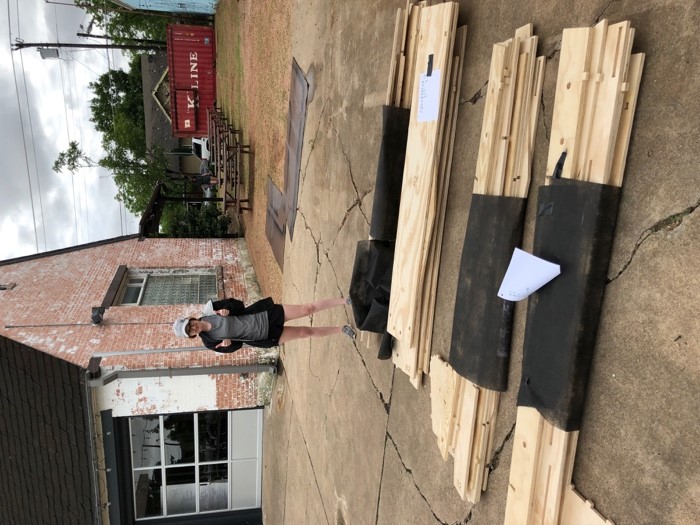 The build day, called FabDay19, was held at Better Block’s location in Bishop Arts District and there were 9 teams including: Studio Outside, Novaré Studio, CityLab HS, Motion Studio at Fitzpatrick Architects, TBG & Boka Powell, Harkensback, Culture House, Crum Collaboration, and OmniPlan. The judges included Mark Lamster, architect critic at the Dallas Morning News, Dominique Torres from the DART Board of Directors, and Ben Reavis from the DDI Transportation Committee. The People’s Choice award went to Studio Outside and the Judges’ Choice was awarded to US!! 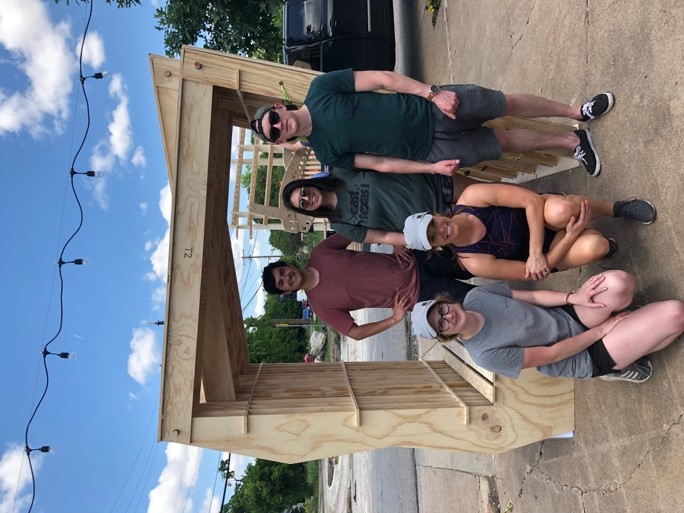 Using 11 sheets of 5/8” pine plywood and 6 hours on the CNC router the budget for bus stop came in under $700 and used no glue, screws, or nails! It took 4 hours to construct.

Since we already had a relationship with the City of Tyler Transit Department prior to the competition, we were able to work out a way to reconstruct the bus stop on a prominent corner of downtown, right in front of the Fair Plaza parking garage. It was a big hit, with TV stations covering the story, calling it the ‘Bus Stop of the Future’. We encouraged pedestrians to stop and take a Bus Stop Selfie and post it to social media (#busstopselfie) to raise awareness for public transit. We have a long way to go until #itscooltoridethebus in Tyler, Texas (another hashtag associated with the Better Bus Stop in downtown), but we know we have to start somewhere! 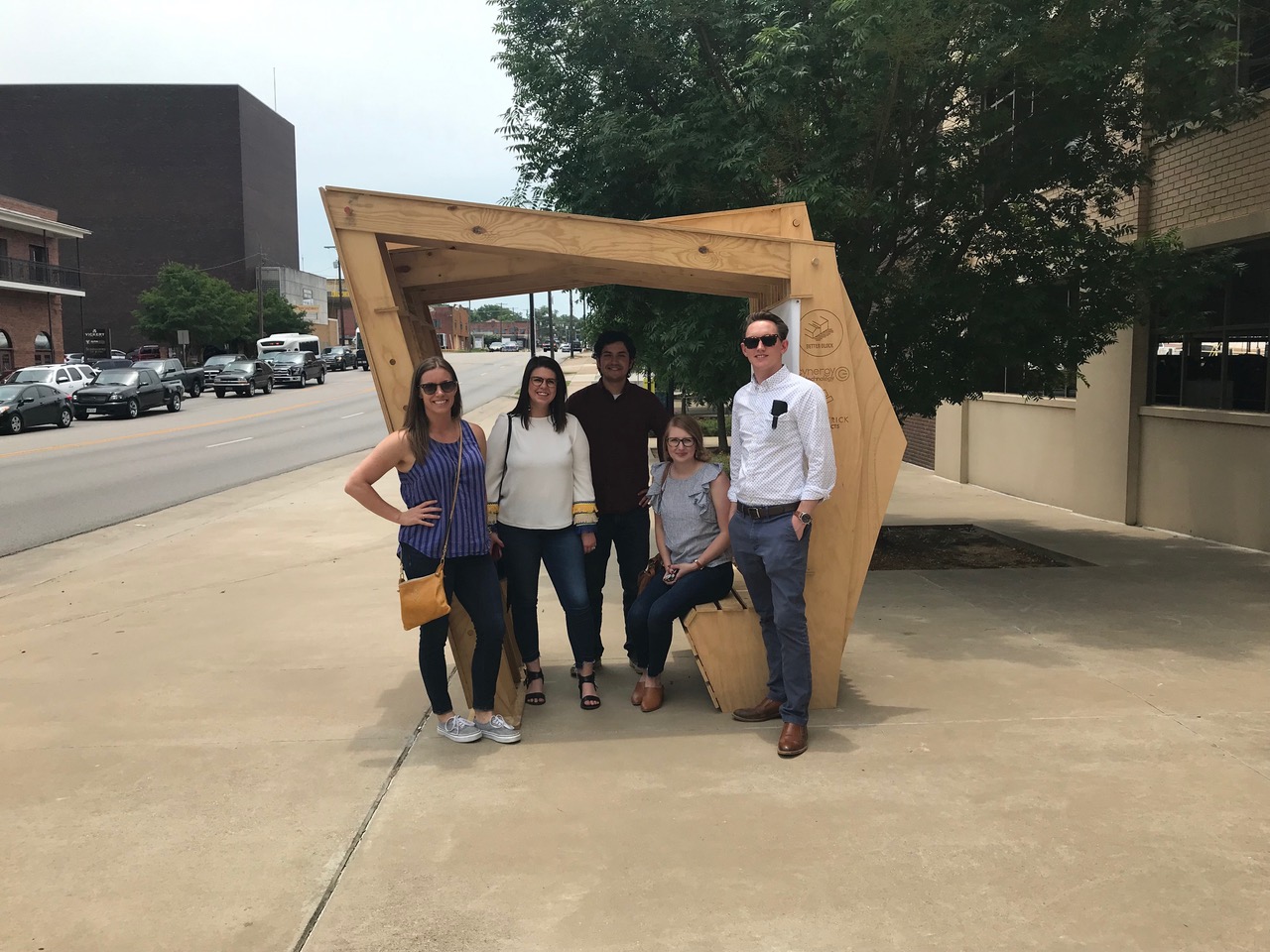 Find out more information with additional images, links to articles, and time-lapse videos of construction here: