The Virgin Hotel Dallas is making an entrance.
Arriving by car, a visitor passes Dallas restaurant staples Ascension and Meddlesome Moth before turning onto a tree-lined thoroughfare to reach a diamond-patterned building with a canopied entrance.

The Design District has long been known as the go-to place for trendy design products and materials. However, since the Dunhill Group acquired 33 acres and 700,000 square feet of buildings there in 2014, the district has been transforming into a live-work-play neighborhood with more residential buildings, shops, and restaurants. 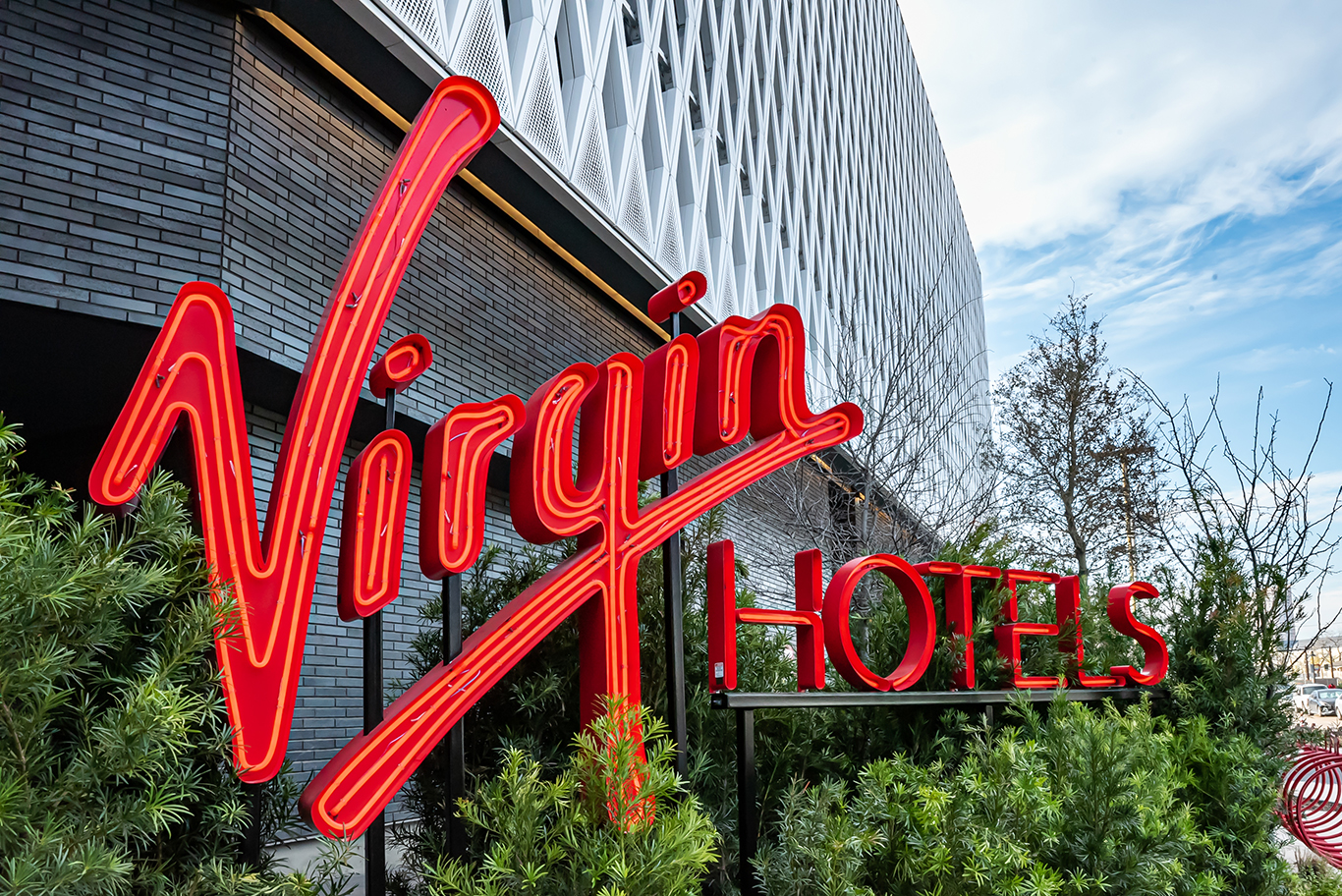 That’s why the addition of a hotel brand like Virgin seemed like the next logical step for Dunhill.

Getting the OK for the height of the hotel required working through a Planned Development amendment with the City of Dallas. The city’s desire to maintain the visual corridor from the surrounding area to the Trinity River also influenced the orientation and dimensions of the building’s footprint.

“Virgin is very fashion-forward, they’re very fun, they’re cheeky, they like to pay a lot of respect to where a building is, like the culture or context. But they also always have their signature moments of fun, something a little British, something a little offbeat,” says Lauren Cadieux AIA, project architect of 5G Studio Collaborative.

While fun and cheekiness fill the interior design of the 268-room hotel, the exterior is structured and refined. The diamond-pattern facade took inspiration from the patterned concrete masonry unit and brickwork of the buildings nearby.

“We made some paper models where we did some physical folding to develop a custom skin,” Cadieux said. “We wanted to make something that felt like clothing, [like] the building was wearing a very tailored suit that has these nice sweeping gestures. But the pattern itself was simple. A lot of it had to do with the context of what was already there.”

From the paper folding, the skin developed into an aluminum diagrid metal structure, a custom system unique to this project. The diagrid system begins at Level 1 and ascends to Level 5 with differing perforation and three-dimensional forms. This grid system wraps the building and opens strategically, depending on where the program called for more light. The diamond-pattern grid seems to touch the ground slightly at the first level, opening up to expose an outdoor patio at the corner Commons Club restaurant. Moving up the building, at the Pool Club on Level 4, the multifaceted panel diagrid opens up again to expose a beautiful view of downtown Dallas from a shaded patio. Above Level 5, where the hotel rooms — or “chambers” in the Virgin vernacular — begin, the diagrid system ties seamlessly into a panel Z-clip system for the rest of the floors above. The faceted diamond panels transition to a regular, almost quilted pattern in contrast to the varying levels of transparency below. 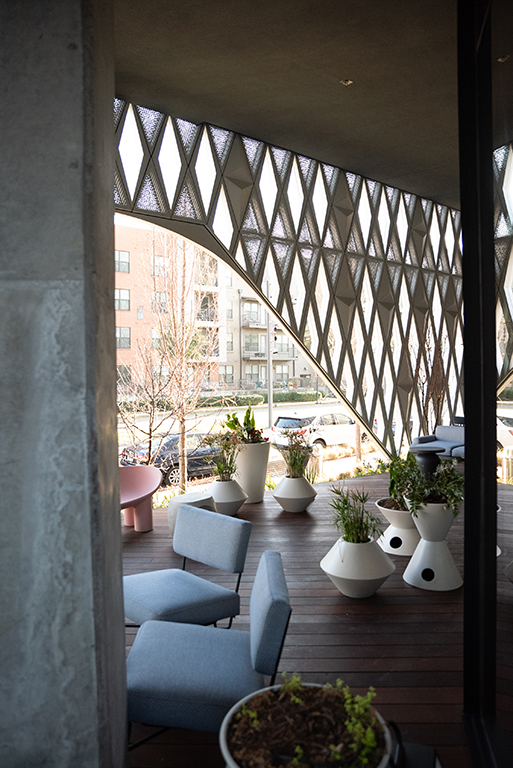 “From an architectural standpoint, we wanted to pay homage to the heritage of the design district which has a lot of patterning to it. There’s the obvious connection to the textiles, the design industry itself, the materials that we work with.” - Lauren Cadieux, AIA, Project Architect, 5G Studio Collaborative 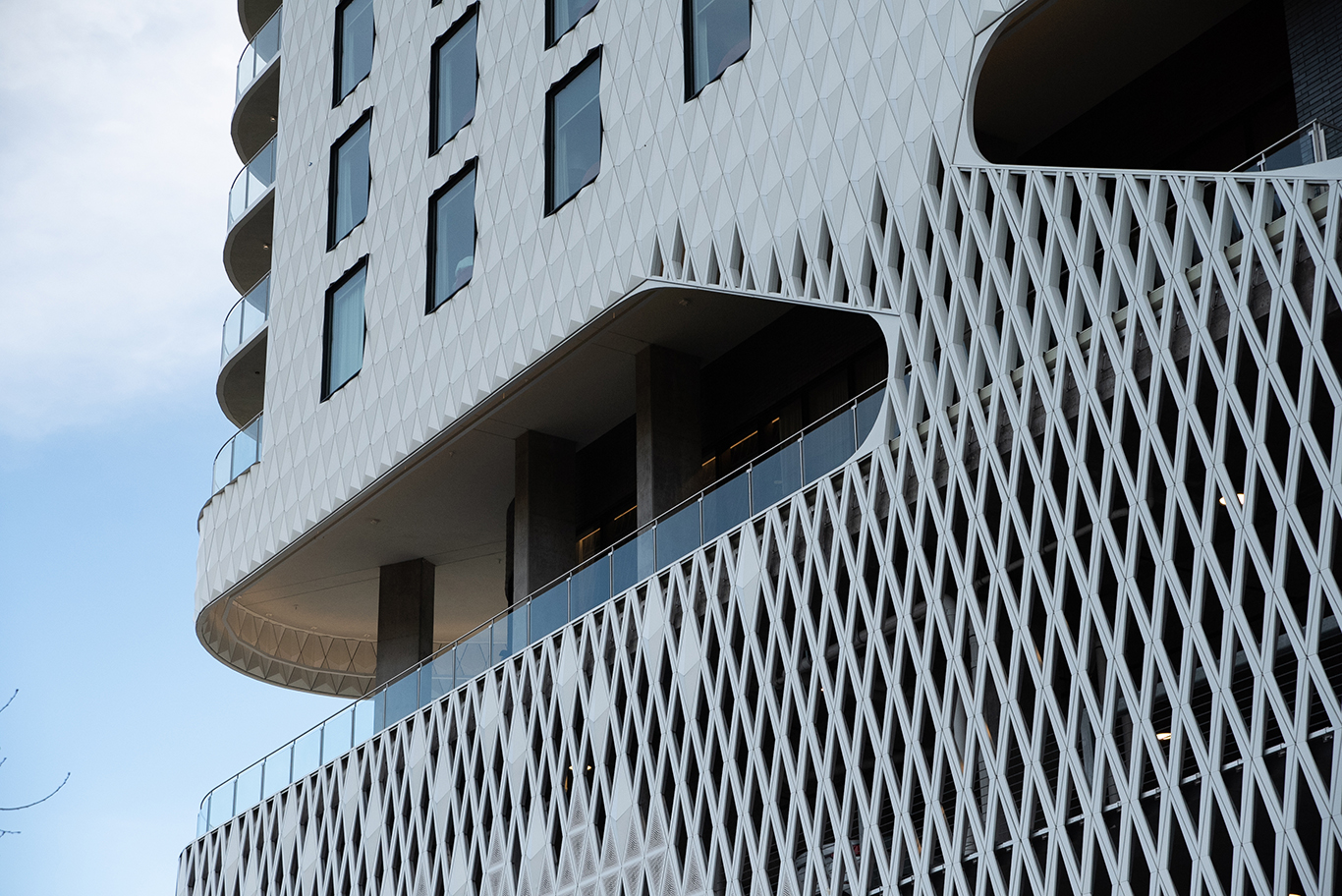 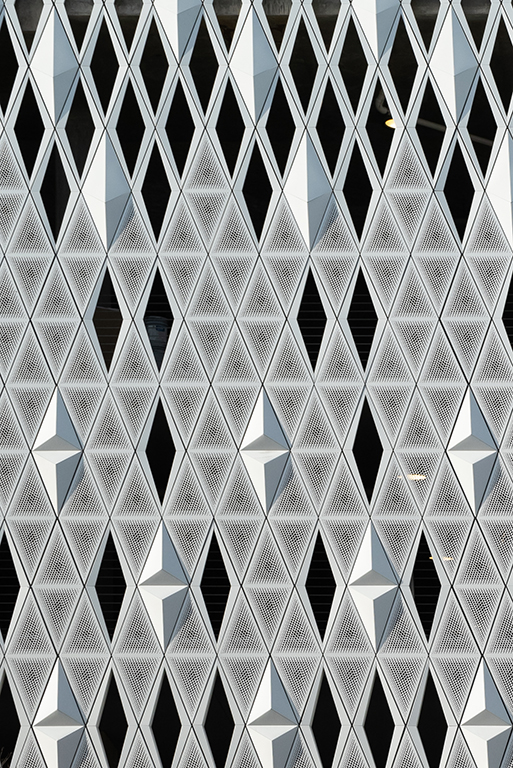 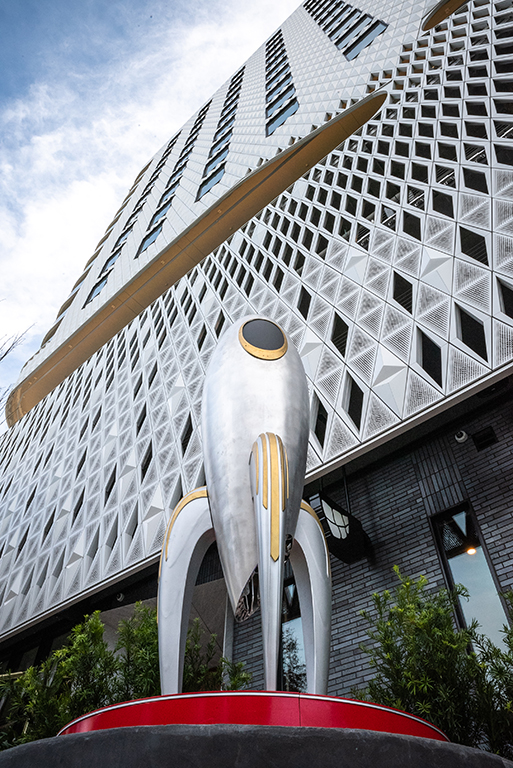 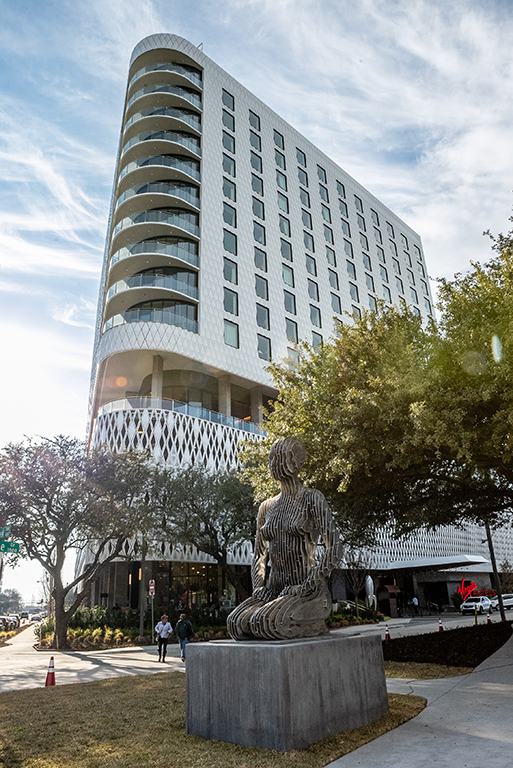 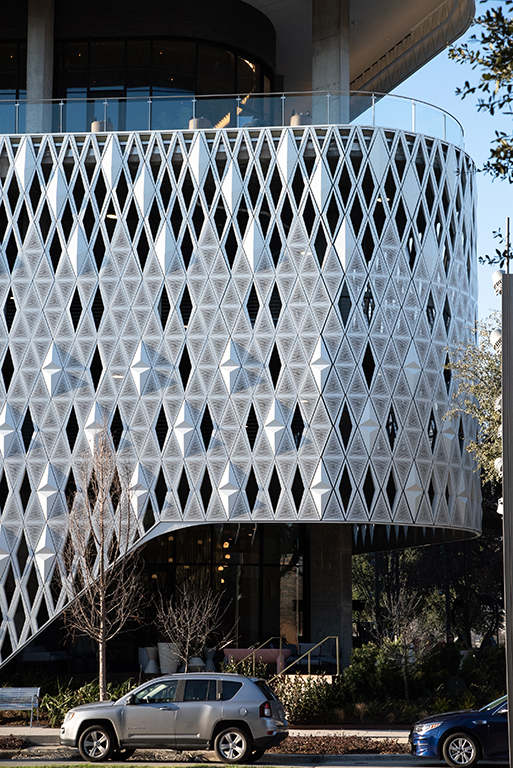 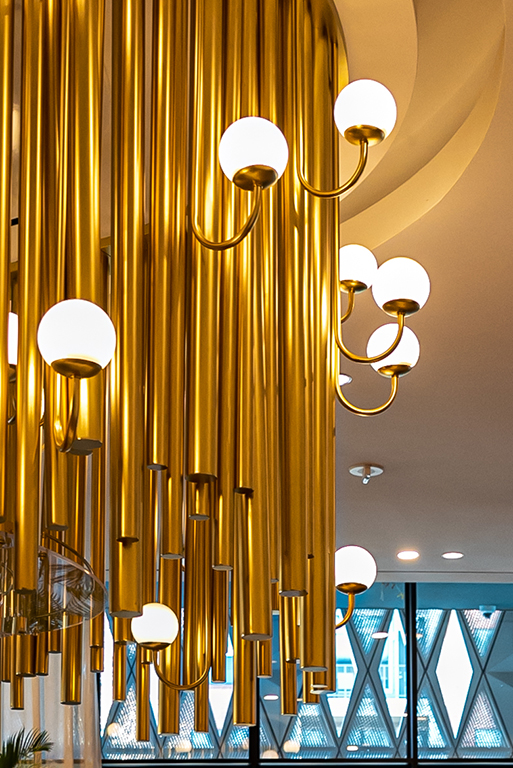 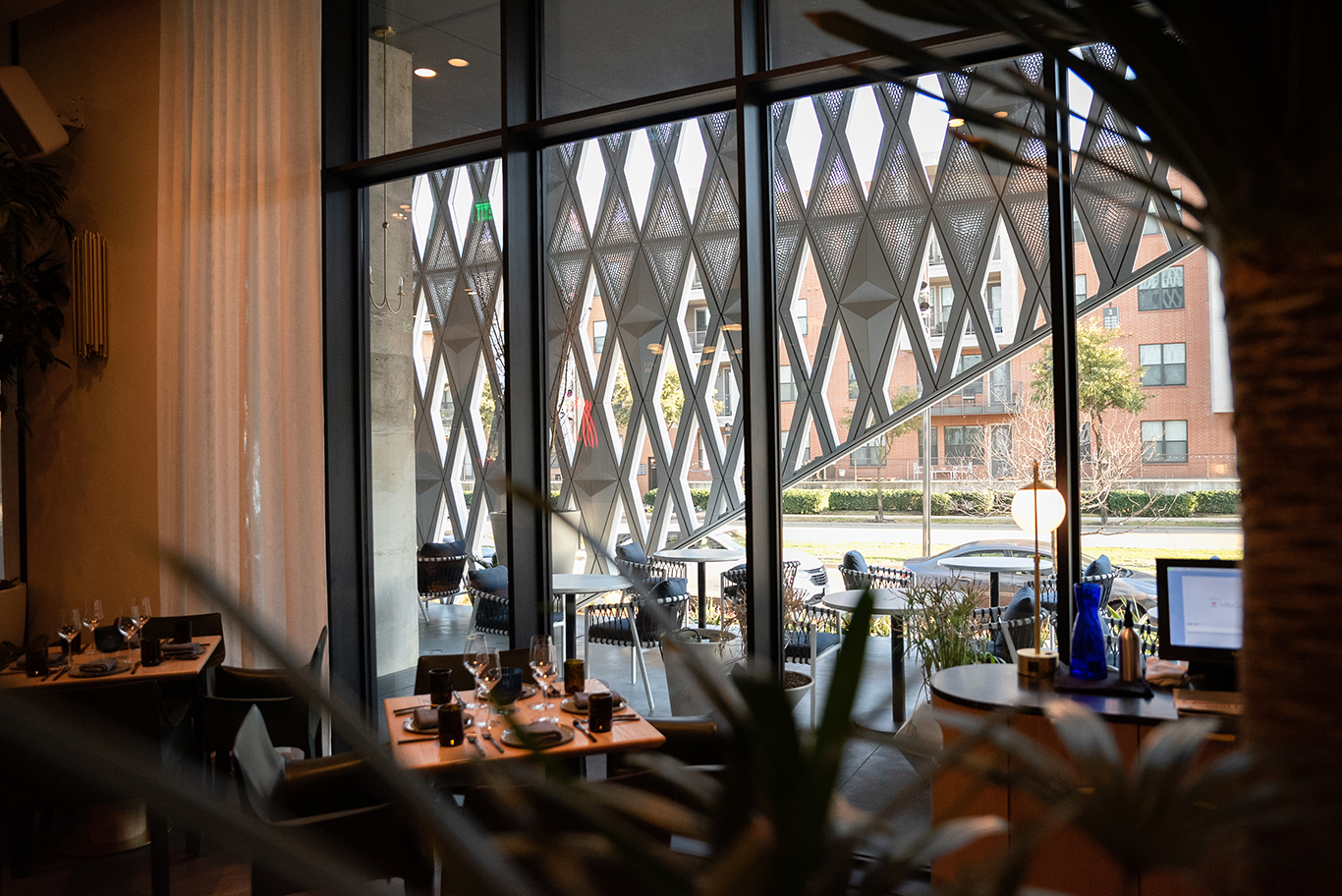 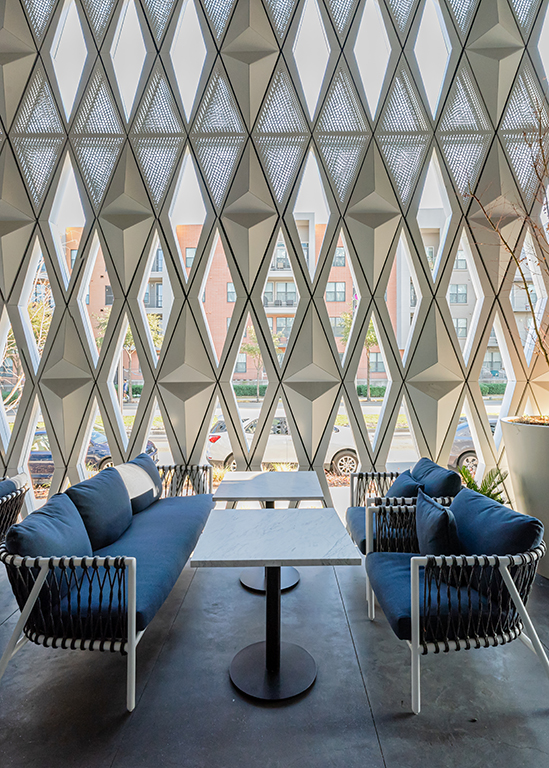